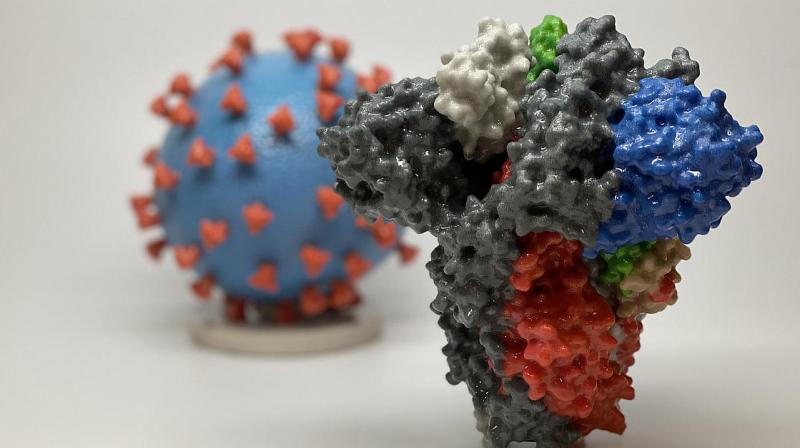 Hyderabad: A new double mutant variant of the coronavirus has been found in India along with several other “variants of concern” that have already been found in 18 states.

So far, some 771 variants of concern have been detected from 10,787 samples collected from different states and Union Territories, the Union Health Ministry said on Wednesday. It said among these were 736 samples of the UK variant, 34 of the South African variant and a single sample of the Brazilian variant.

The ministry however stressed that no sufficient link has been established between the recent surge of Covid-19 cases in India and the new Indian variant with E484Q and L452R mutations. “The double mutant coronavirus and other variants of concern were identified in a few samples but the numbers are not sufficient to establish a relationship to explain the rapid increase in cases in some states,” the ministry said.

Maharashtra also has this variant and the tested samples revealed that, compared to December 2020, there is an increase in infection rates by 15 to 20 per cent.

Stated the director of CSIR-CCMB, Dr Rakesh Mishra: “Both these mutations were found together, in these samples. The L452R mutation was detected in US in November 2020. The other, E484Q, was detected in Brazil and South Africa. We need to take more samples, study and understand how these two variants are living together.”

In the other coronavirus variant of concern, a virus with N440K mutation, having high transmission rate, was detected in 123 of the 2,032 samples collected in Kerala, 53 of the 104 samples in Telangana and in 33 per cent of the samples in Andhra Pradesh.

This variant emerged in Andhra Pradesh in December 2020. CCMB, in its study, cautioned that this variant would spread to other southern states. The variant is found also in 16 other countries including the UK, Denmark, Singapore, Japan and Australia. In a study published in the journal of the Indian Academy of Sciences, CCMB had identified the E484Q mutation for further surveillance because of its propensity to having high transmission rates.

Increased testing, comprehensive tracking of close contacts, prompt isolation of positive cases and contacts, as well as treatment according to the protocols, must be carried out, the ministry said.

It said genome sequencing by Indian SARS-CoV-2 Consortium on Genomics (INSACOG) has identified variants of concerns (VOCs) in several states and a new double mutant variant.

WHAT IS INSACOG: The Ministry of Health had established on December 25 the INSACOG, a grouping of 10 national laboratories, for carrying out genomic sequencing and analysis of circulating Covid-19 viruses, and correlating epidemiological trends with genomic variants.

Genomic variants of various viruses are a natural phenomenon and are found in almost all countries, the ministry said and added: “Since INSACOG initiated its work, 771 variants of concerns (VOCs) have been detected in a total of 10,787 positive samples shared by states and UTs.”

“The analysis of samples from Maharashtra has revealed that, compared to December 2020, there has been an increase in the fraction of samples with the E484Q and L452R mutations,” the ministry said.

Such mutations confer immune escape and increased infectivity. These mutations have been found in about 15-20 per cent of samples and do not match any previously catalogued VOCs, the ministry pointed out.

Added the ministry: “These have been categorized as VOCs but require the same epidemiological and public health response of increased testing, comprehensive tracking of close contacts, prompt isolation of positive cases and contacts as well as treatment as per National Treatment Protocol by the states and UTs.”

COVID-19 vaccine gets weak antibody response in people on immunosuppressants