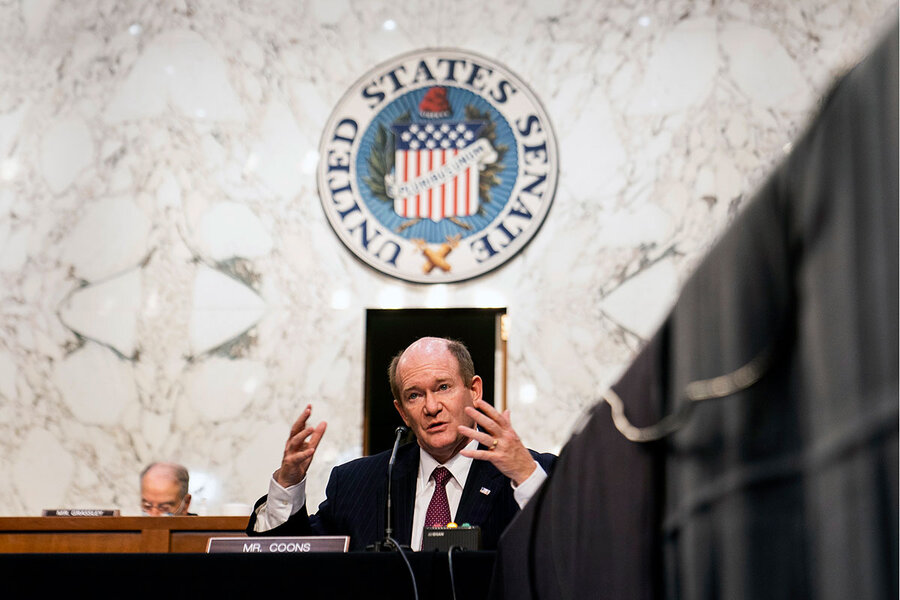 Those qualifications alone made him a good candidate for the broader task of signaling that a new team in Washington intends to raise attention to African issues from the low level they’d fallen to over the past decade, especially under the Trump administration.

But what made Mr. Coons even more of a natural is a decadeslong interest in African issues broadly, and in matters of democratization and human rights particularly, in the rich but challenging context of the continent’s ethnic, tribal, and religious diversity – complex issues at play to varying degrees in the Tigray conflict.

As a college student in the 1980s, Mr. Coons spent a semester at the University of Nairobi in Kenya, immersing himself in Africans’ struggles for freedom and democracy. After graduation, he returned to Africa to work with Anglican Bishop Desmond Tutu and the South African Council of Churches in the anti-apartheid movement.

It was during that experience that Nelson Mandela became one of his heroes.

Back in Delaware in the 1990s, the lawyer and Yale Divinity School graduate gave sermons in Presbyterian churches on the evils of the apartheid system.

And then as a U.S. senator – elected in 2010 to fill the seat vacated by Mr. Biden when he became vice president – Mr. Coons made African issues one of his areas of focus.

“Senator Coons has been very active in the Senate on Africa issues and Africa policy, perhaps the most active of all the senators,” says Tom Sheehy, a former staff director for the House Committee on Foreign Affairs.

Recalling how the Delaware senator organized his questioning of Antony Blinken at his confirmation hearing for secretary of state in January, Mr. Sheehy says Mr. Coons revealed a lot about his priorities when he zeroed in on Ethiopia.

“Senators are very aware that they need to make good use of their limited time at high-profile hearings like that,” says Mr. Sheehy, now a distinguished fellow focusing on conflict resolution in Africa at the U.S. Institute of Peace (USIP) in Washington. “Coons could have asked him about a hundred other conflicts, but when he focused on Ethiopia, it was a clear indication of his interests.”

Ethiopia had emerged over recent years as a particular bright spot in an advancing Africa, with a booming economy and expanding middle class. The country’s leader since 2018, Prime Minister Abiy Ahmed, won the Nobel Peace Prize in 2019 for returning peace to a country on the brink of ethnic warfare and for committing to build a democracy through dialogue.

But that image of progress and reconciliation has been shattered by the conflict in the country’s Tigray region. Since November, government forces and affiliated militias have been battling forces of the regional ruling party, the Tigray People’s Liberation Front – the political power that ruled Ethiopia for three decades before Mr. Abiy rose to power.

In February, the U.S. concluded that the Ethiopian government was carrying out a campaign of ethnic cleansing in Tigray, destroying entire villages and displacing thousands of ethnic Tigrayans. Many of the displaced have fled into neighboring Eritrea, where hundreds have been massacred, according to human rights organizations; or to Sudan, sparking tensions with the Sudanese government.

Ground to make up

Many Africa specialists in the U.S. say they are heartened by the message the Coons mission to Ethiopia delivers about renewed U.S. attention to Africa. But a sense of relief is attenuated, some say, by the reality that the U.S. has a lot of ground to make up, particularly in Ethiopia.

“Biden is doing the right thing being proactive on this issue so quickly, and I think the prestige Coons brings into it as someone who has the president’s ear can only be helpful, but we’re still late to the game,” says Michael Rubin, a resident scholar specializing in the Middle East and the Horn of Africa at the American Enterprise Institute (AEI) in Washington.

Add to the mix the tensions Ethiopia has sown with its neighbors, including Sudan, with its enormous hydropower project, the Grand Ethiopian Renaissance Dam, and some experts see the makings of a broader regional conflict in the Horn of Africa.

Mr. Sheehy of USIP says that as encouraging as the Coons mission was in his eyes, “the key to progress in Ethiopia is going to be the follow-up.” Adding that the U.S. “needs to keep a dialogue going,” he says he’s encouraged by rumblings suggesting Mr. Biden will soon appoint an envoy for the Horn of Africa.

Both Mr. Sheehy and AEI’s Mr. Rubin say another encouraging feature in the Coons mission is that it suggests President Biden’s interest in working with Congress and building a bipartisan foreign policy. Mr. Coons is known for his efforts to work across the aisle with Republican colleagues.

For Mr. Rubin, that means the U.S. could again have the makings of a bipartisan Africa policy akin to the one developed by President George W. Bush. With bipartisan backing, he says, President Bush helped resolve the Darfur conflict in Sudan with his naming of retired Sen. John Danforth as his Darfur envoy, and he launched the hugely successful President’s Emergency Program for AIDS Relief, or PEPFAR, which was instrumental in helping Africa manage the AIDS crisis.

But what worries Mr. Rubin is that the Biden team may be about to discover, in Ethiopia and elsewhere, that a reengaged America may no longer have the influence and dominance that U.S. diplomacy once did.

Mr. Rubin notes, for example, that China financed Addis Ababa’s new metro system and scores of other recent developments. He says Prime Minister Abiy “could say, ‘We’re not going to pay attention to you because you’re not that important to us anymore.’”

And that, he says, is “a wake-up call Biden is going to get all over the world, waking up … to the realization we don’t have the power and leverage we once did.”

‘Somebody cares’: How schools are helping with student well-being