Good day, everyone!
This time we will build a canopy over the future porch to enter the bathhouse (presented by me in previous materials).
On completion the construction and improvement of the dressing room, the work on the arrangement of the entrance suggested itself, for the visual completion of the entire bath.
It was decided to build a canopy for now, and only then, in the spring, to organize a la porch, steps there, handrails, etc ..
I apologize for the fact that there are no photos on the detailed layout of the processes, initially I was not going to make out the material on the shed, but I had free time, and what kind of pictures I did for myself and so I decided to share my homemade product with you.
But let's start everything in order.
STEP 1 Marking the position of the future canopy.
The approximate location of the future porch was determined much earlier, using 2 plates of 1000×500 mm laid on a sand cushion, used in construction to complete the parapets. Since the front door to the dressing room turned out to be high, and there was not much distance left to the hem, it was decided to use this space to the maximum, but so that the arc was above the borders of the “porch” and the door opening would not rub against the visor much. As a starting template, I used a wooden rail with a rope stretched at the ends. The rail, 2500 mm long, is the length of the profile pipe (arc), and we set the width of the structure with a thread. So he figured out, increasing or shortening the rope, the radius (height) of the arc changed accordingly. I will not go into the details of the calculations and calculation of the values ​​of the elements of the segment of the circle, in the open spaces of “neta”, there are quite a variety of online calculators. And I already knew the length of the arc, so I determined the height of the arc “by eye”, which would look better, as a result, the chord length was 2300 mm + then 2 times the thickness of the welded profile pipe. I also took into account the location of the mounting brackets, in the places of the frame supports of the dressing room.
The visor decided to support the front on the pipes, since the area of ​​the roof of the visor is not small, the winters are snowy, the side is north – west, and the fasteners are in wood, which is not so reliable. And the loads on the “Capercaillie” screws in the mounting brackets will not be axial at an angle, but transverse.
STEP 2 Budget.
I sketched a technical drawing and went to the firms that manufacture these structures, the prices of my comrades upset me a lot, I didn't even expect such a powerful pricing policy – tens of thousands.

Well, what a fuck , homemade, so homemade. I drove to the utility store, to the cold forging department, well, here you go, all the elements for creativity are available, with an adequate price. As a result, the whole set cost me 5138 domestic ones (Pipe 25×25, 15m x 67 rubles, 2 metal balusters for 370.5 rubles, 2 twisted pipes for 940.5 rubles). Metal sheet 0.5 mm, painted 6005 (Moss) 2.84 m 2 x 320.42 rubles. + corner in color 114 rubles, ordered in the same place as the roof and gusset. A can of paint 187 rubles
Materials and tools: Materials:
1. Metal baluster 720×320, 2 pcs.
2. Metal sheet 0.5 mm, painted 6005 (Moss).
3. Metal plates for pipe ends 4 pcs.
4. LED floodlight with motion sensor 20 W.
5. Self-tapping screws for roofing metal – metal.
6. Self-tapping screws “Capercaillie” 8 x 100 mm. by the number of brackets.
7. Profile pipe 25×25 mm.
8. Twisted pipe Ф51 mm.
9. Door stop.
10. Enamel – primer for rust (black).
Tools:
1. Hydro level.
2. Drill.
3. Painting brushes.
4. Flap circle + cup with metal pile Ф 100.
5. Cutting and grinding wheels.
6. Hammer.
7. Roulette.
8. Welding machine with accessories.
9. Stepladder.
10. Drills Ф 4mm, Ф10mm.
11. LBM.
12. Screwdriver.
STEP 3 Blanks.
On sale, the profile pipe was immediately cut into the dimensions I indicated with a small reserve (good service). In the same place, on the territory of the base, in a company where frame greenhouses are made, on a pipe bender, men rolled 3 pipes into arcs, for 300 domestic ones. All components on L.A. were solemnly delivered to the assembly site.
STEP 4 Assembling the canopy frame.
I placed 3 arcs parallel to each other across the workbench and welded end pipes, magnetic corners and a tape measure, for the diagonals to help (the “depth” of the canopy was 1000 mm.). Having measured the center of the arches, I welded on the central struts, having previously adjusted them in size (it turned out to be about 470 mm each, and since the structure was assembled not in a conductor, but practically in a canopy, the dimensions “floated”). All parts were butt welded, and not overlapped by separate beams, for a larger area of ​​adhesion of the sheet roofing metal. I divided the halves into 3 more parts, so 6 spans gradually turned out. Drilling holes Ø 10 mm. in a strip of metal, cut the mounting brackets and welded them in the right places to the profile, holes down, for the convenience of subsequent installation of the structure.
Welding seams were smoothed, and the whole structure was covered with a primer – 2 layers of enamel.
I figured out the entire resulting structure in place. It seems not bad.
STEP 5 Metal balusters and support posts.
I decided to use decorative metal balusters “cold forged” as slopes to strengthen the structure. But there was a small problem, the fact is that the products are the same on one side, and not “mirrored”. On this, I had to digest at one of the balusters, a decorative “flower” on the opposite side. 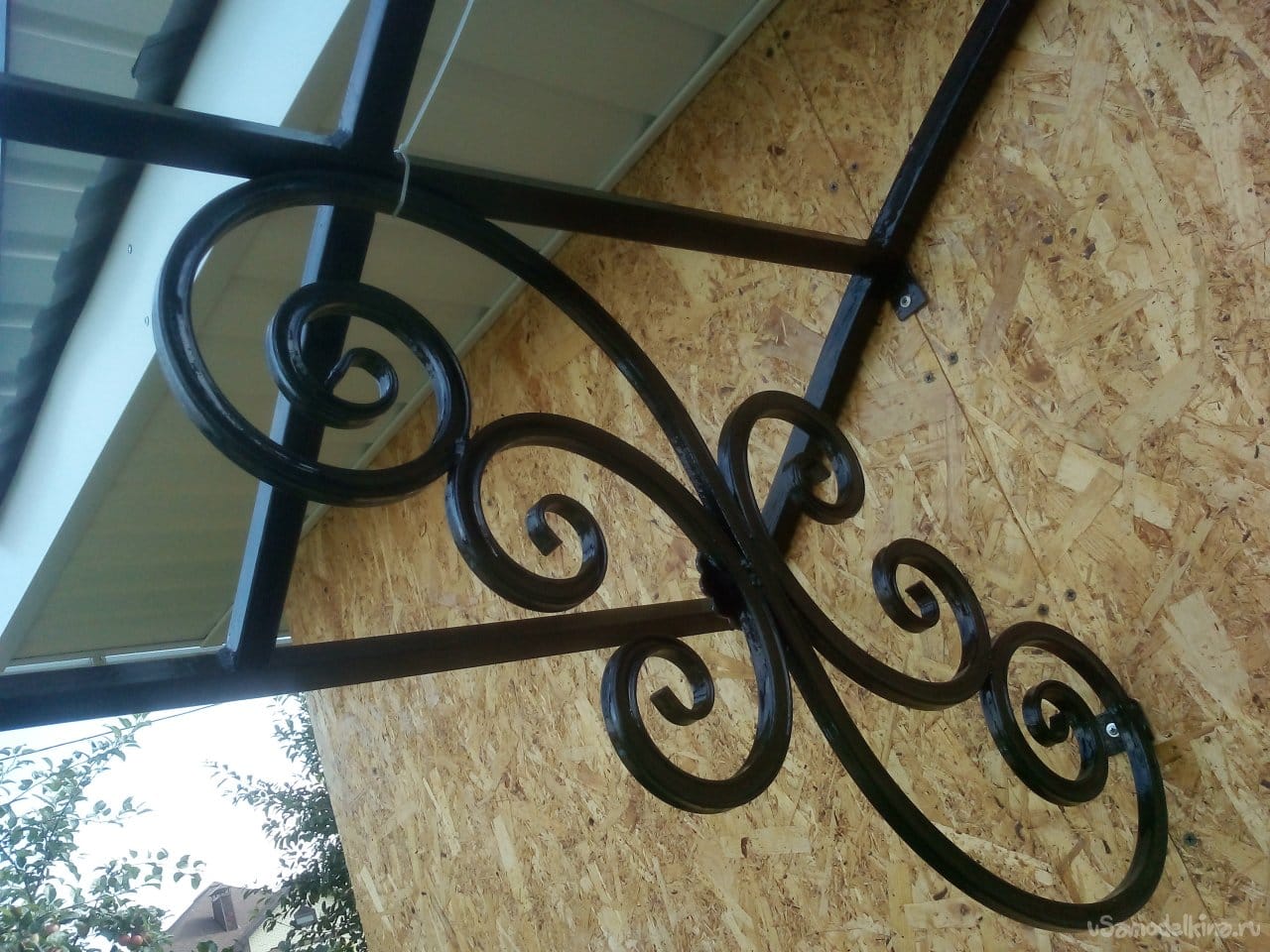 So the mounting brackets were welded on. Painted. I attached the balusters to the wall and welded them on the spot to the canopy frame, after setting all angles and distances. 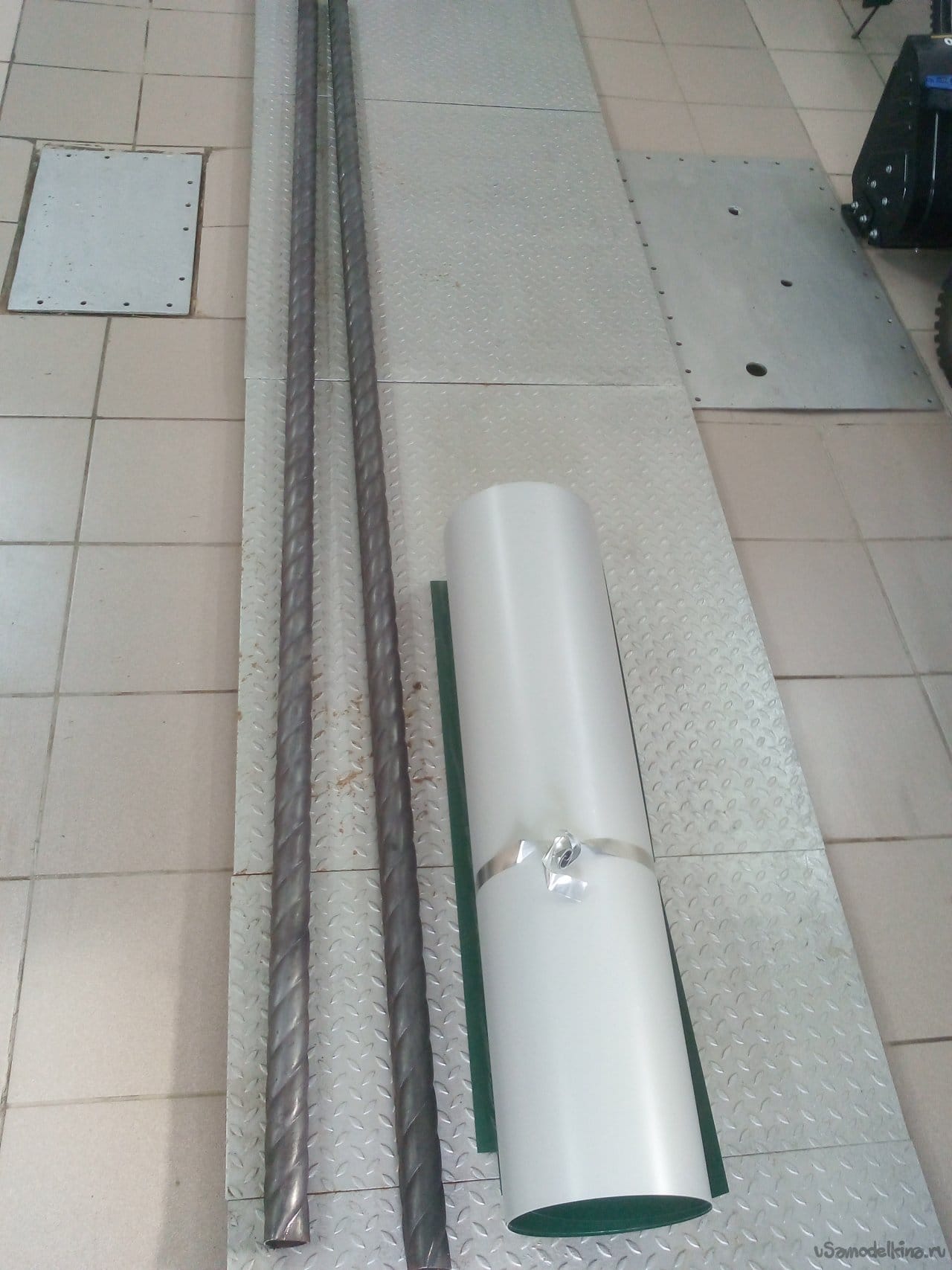 Twisted I cut the pipes to size according to the resulting distance between the slabs and the canopy. On the ends of the pipes I welded square, 70×70 mm flanges cut from sheet metal 3 mm. The uprights were also painted and welded in place. At the bottom, the pipes are not yet secured by anything and are held by the weight of the structure, in the future they will be connected with a handrail and a step. 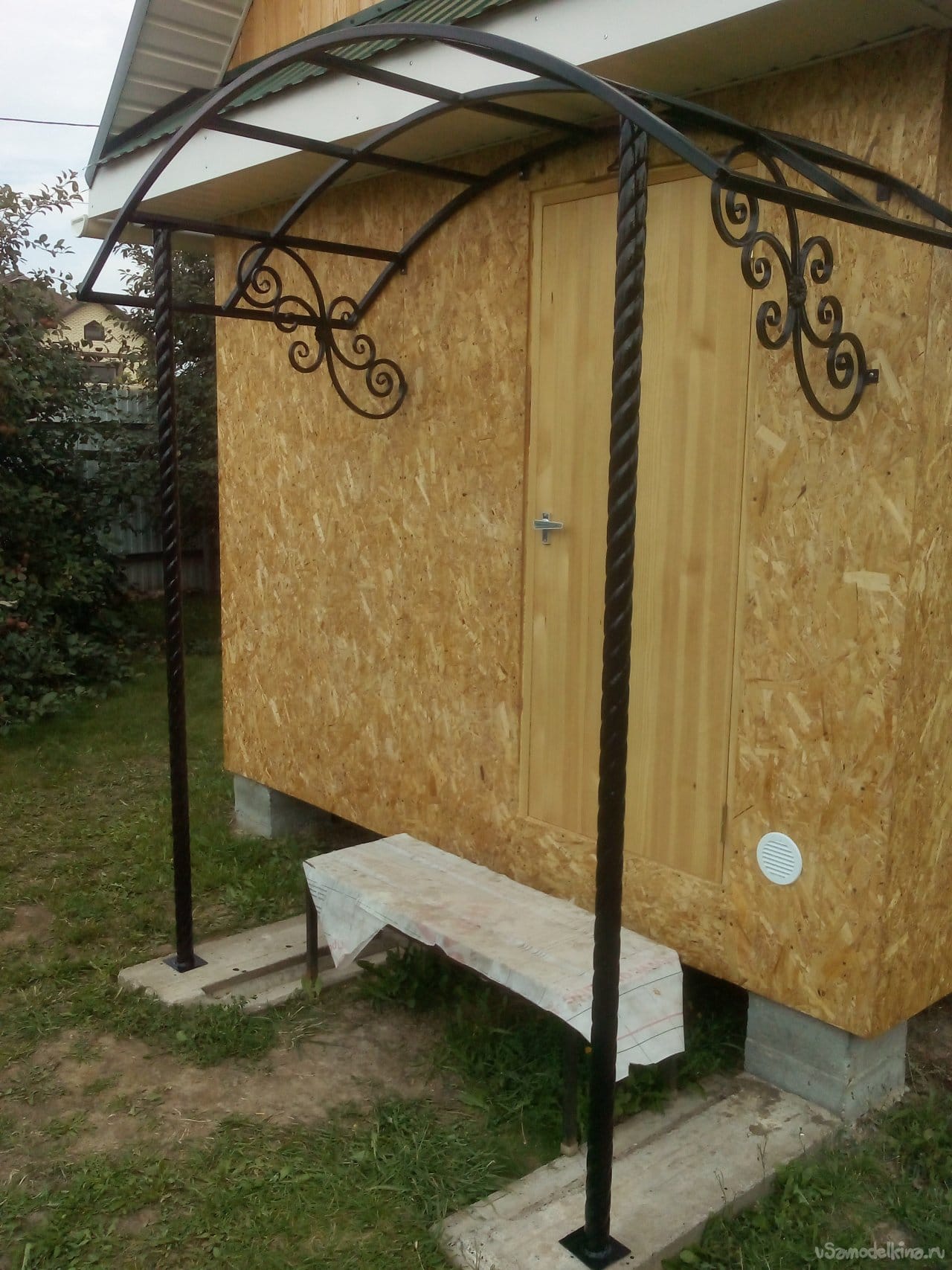 STEP 6 Cover with metal.
When installing the roofing sheet of metal, it was necessary to dismantle the entire welded structure from the wall and lean it obliquely against the workbench, for convenience. The standard for the sheet length is 2000 mm; therefore, the overlapping sheets were joined at the level of the 2nd jumper. Along the edge, which adjoins the wall, missed a corner of 30×30 mm, made of the same sheet metal in color, notching the upper edge every 150 mm to give an arc. I did it to drain water from the wall, although the edge turned out mainly under the hem and “kerchief”, but he was reinsured. Metal fastened to roofing screws (metal – metal), in color.
STEP 7 Final assembly. 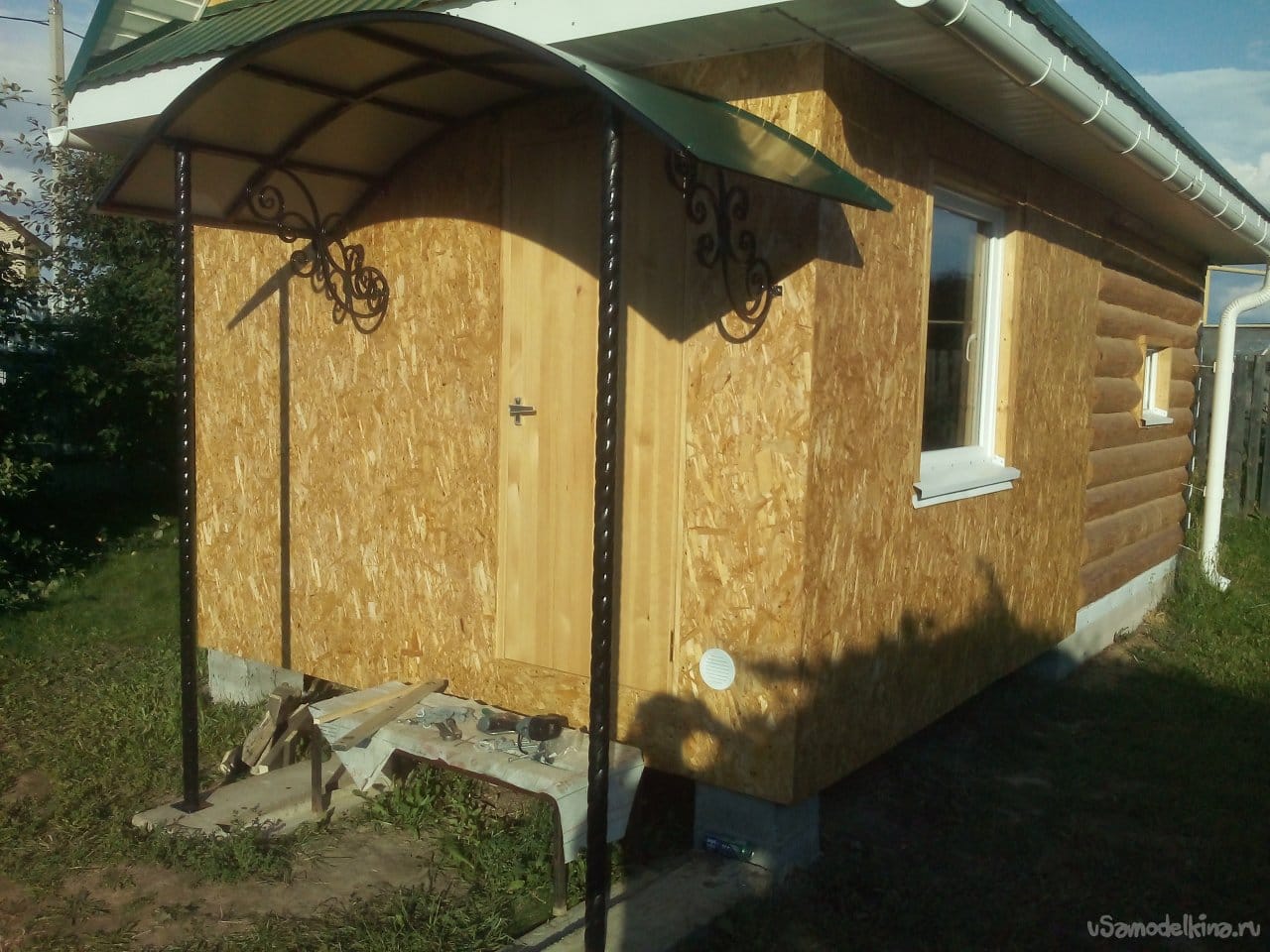 Install the whole structure in its intended place. 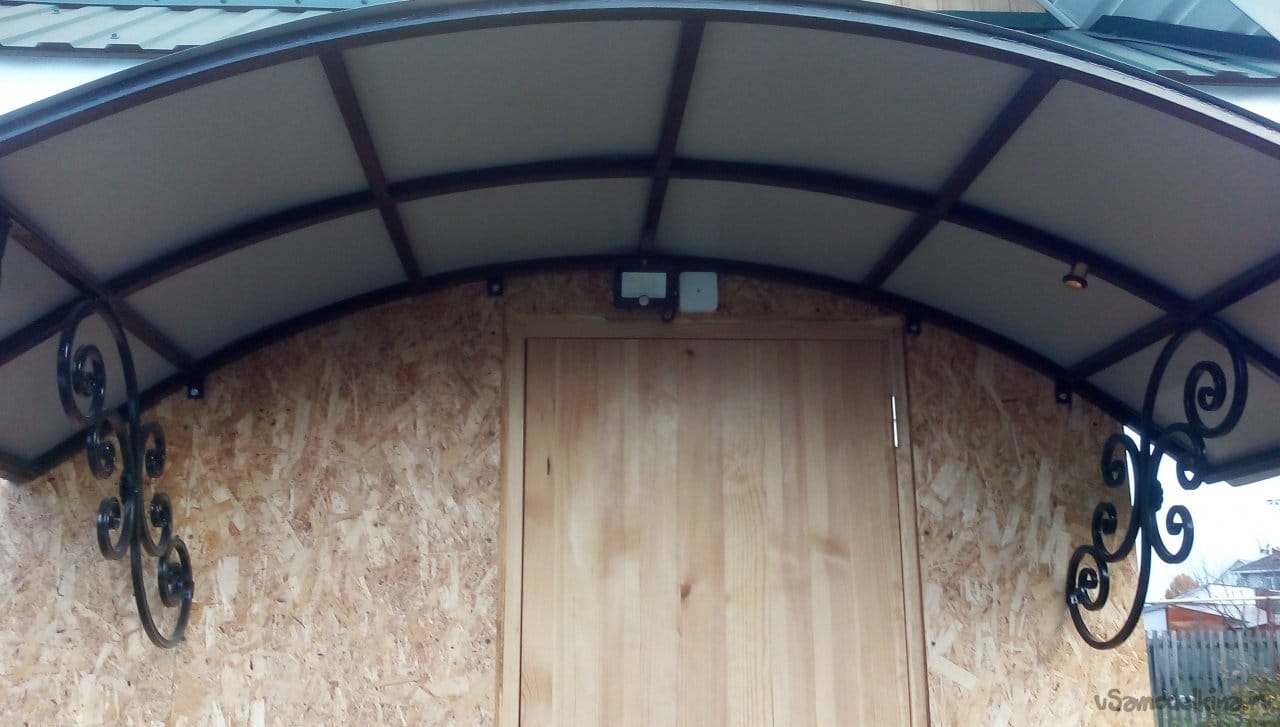 Install and connect an LED floodlight with a motion sensor. < br> We install in place an emphasis for the door.
We tint the “jambs” and welded seams.
We insert the plug into the visible end of the pipe.
In the place of the step we have adapted a garden bench so far.
Done. 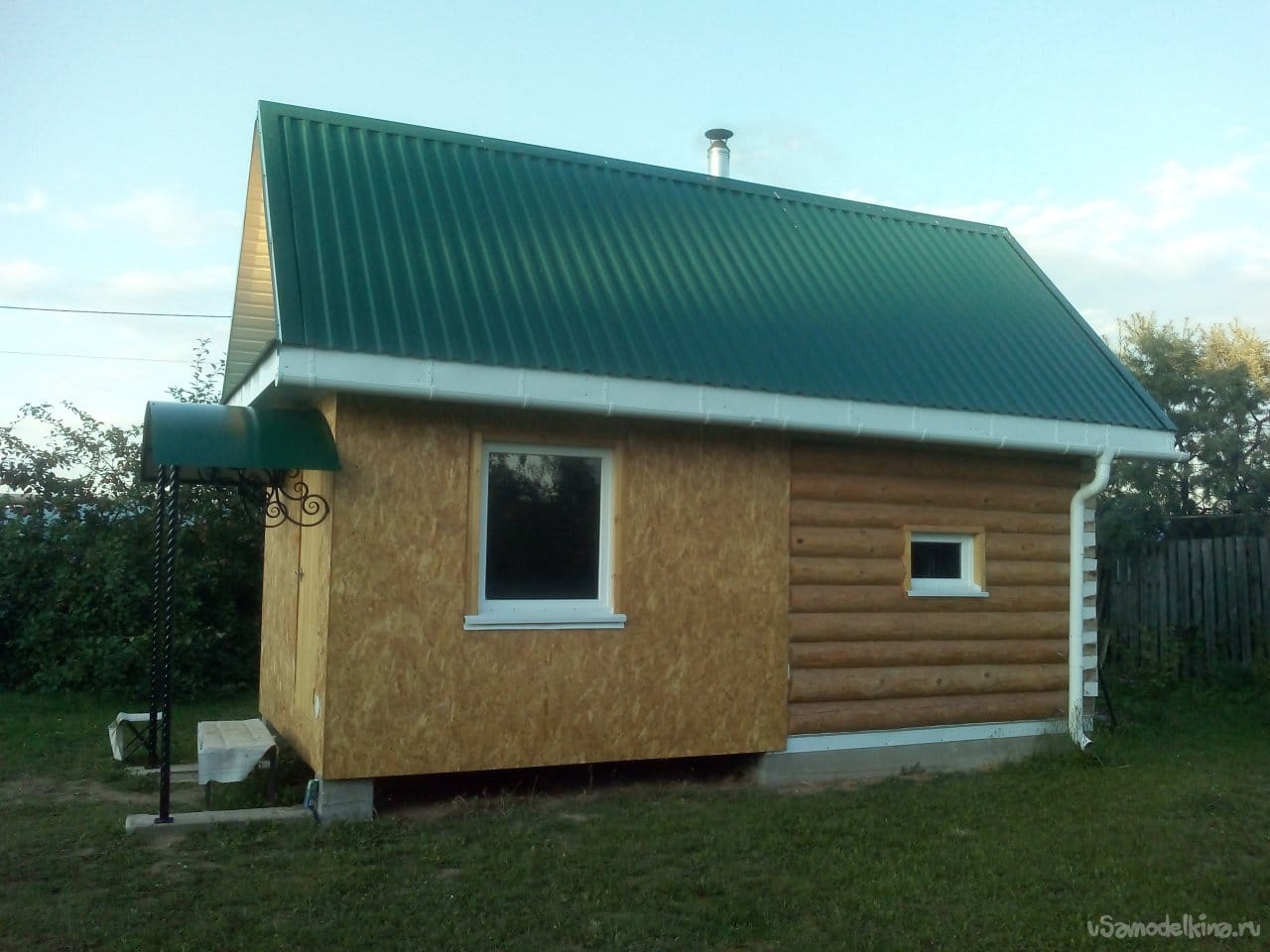 STEP 8 Pleasant sensations.
We walk around the object and admire the result. I tried to do everything so that “Pleasing to the eye.” The winter passed, it was abnormally snowy (as they say, not ready for the “anomalous” weather forecasters and city services “). The snow cap on the canopy was quite large and kept from behind the” step “with an apron. But during thaws, the snowy edges broke off well under their weight and the next stage of completion will be a wooden porch, since the foundation has already been laid.
GOOD LUCK !!!