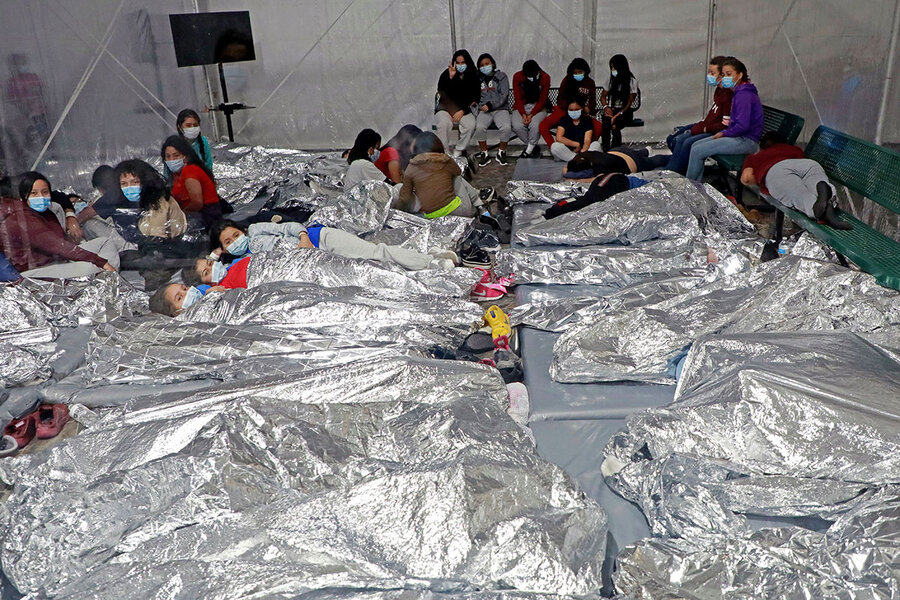 The images are arresting. Young migrants, most appearing to be teenagers, crowd into makeshift Border Patrol facilities in the town of Donna, Texas, not far from Mexico. Many are lying on floor mats under foil blankets.

On Tuesday, the day after Democratic Rep. Henry Cuellar of Texas released the photos, the U.S. Customs and Border Protection agency put out its own pictures depicting scenes of young migrants at cramped processing facilities near the U.S.-Mexico border.

It was a stark example of a new administration – one that promised “transparency” on Day One – responding to pressure to be more forthcoming about a bad, burgeoning situation. Congressional delegations from both parties have visited the border. President Joe Biden says he’ll visit soon. And his administration – under fire for limiting press access to the border, citing privacy and public health concerns – has promised more access. Details were still being finalized, White House press secretary Jen Psaki said Monday.

The migrant crisis on the U.S.-Mexico border has emerged as an early test of the Biden administration’s leadership. So far, it appears unprepared.

Two months into his presidency, President Biden retains majority job approval by the American public, after gaining passage of his popular $1.9 trillion COVID-19 relief package. Yet the border issue has emerged as a major policy and public relations challenge. The Biden team is trying a range of steps, including diplomatic visits this week, to seek short- and long-term solutions. Yet, after years when his own party has billed itself as ready to address this issue with a blend of compassion and wisdom, it’s a challenge for which the new administration has seemed surprisingly flat-footed in its early efforts.

“That the campaign, then the transition team, and now the White House did not prepare significantly for this is quite shocking,” says John Hudak of the Center for Effective Public Management at the Brookings Institution.

The high political stakes are already becoming clear. Support for a key element of his immigration reform bill – a pathway to citizenship for the nation’s 11 million unauthorized immigrants – has plummeted, according to a Politico/Morning Consult poll. Some 43% of voters favor the provision, down 14 percentage points since January. More broadly, fully half of U.S. registered voters call the border situation a “crisis.”

Mr. Hudak notes that Democrats and immigration advocates had long complained about Trump administration actions on the border, including construction of the wall and the family separation policy. And a surge in immigrants at the border should not have come as a surprise. Take Mr. Biden’s election, his friendlier posture toward immigrants, and a reviving U.S. economy as the vaccination program rolls out: All of that, Mr. Hudak says, suggests that there would be an increase in the flows of immigrants.

Effects of a truncated transition

Theresa Cardinal Brown, managing director of immigration and cross-border policy at the Bipartisan Policy Center, cautions against judging too harshly. The Biden team had a truncated transition from the Trump administration, and is still getting its people in place in relevant agencies, relying for now on career employees in key leadership positions before nominees are confirmed.

But she agrees that the Biden transition team had to have thought a border surge might happen. And, she adds, working toward long-term solutions can take place in the context of addressing the short-term problem.

Using the Federal Emergency Management Agency, or FEMA, to find facilities for short-term housing of migrants “is great in the short term, then you need to invest long term in facilities that you keep even if the numbers go down,” she says.

The real issue, Ms. Brown notes, isn’t the number of people showing up at the border; it’s who’s showing up. The trend toward more families and unaccompanied children is relatively new. The system at the border was built when most of the arrivals were adult Mexican men seeking work, not asylum. “

Remember, we have reduced capacity in the system,” Ms. Brown says. That’s because of COVID and because the Trump administration had reduced the number of facilities after implementing other asylum prevention mechanisms.

A year ago, when the pandemic started, the Centers for Disease Control and Prevention invoked a provision known as Title 42, which allows the government to reject asylum-seekers at the border. The Biden administration has kept Title 42 active, but is allowing unaccompanied minors to remain in the U.S. on humanitarian grounds.

That exception has sent a signal to would-be migrants that making the trek north may be worth the risk.

For President Biden, it’s a no-win situation. His more welcoming posture toward migrants – particularly minors – is in keeping with his own philosophy as well as the leftward shift of the Democratic Party since his time as vice president, when then-President Barack Obama was dubbed “deporter in chief.”

But Mr. Biden has also made himself politically vulnerable ahead of both the 2022 midterms, when Democratic control of Congress is at stake, and even potentially the 2024 presidential election. Immigration was the founding issue of Donald Trump’s 2016 presidential campaign, and either Mr. Trump himself or his successor, if he doesn’t run, could well exploit Mr. Biden’s handling of the border if the problem isn’t stabilized.

“It’s the issue that can usher any opponent of this administration into office,” says James Carafano, vice president of national security and foreign policy studies at the Heritage Foundation.

For now, the Biden team is working the problem from multiple angles: stabilize the situation on the border and with relevant governments in the region. Roberta Jacobson, special assistant to the president and coordinator for the southwest border, and Juan Gonzalez, special assistant to the president and senior director for the Western Hemisphere, traveled to Mexico this week for meetings with government officials. Mr. Gonzalez then headed on to Guatemala.

The meetings were aimed at addressing ways to stop migrants from heading north, plus strategies for addressing the root causes of migration in the home countries, such as violence and poor economic prospects.

In Washington, Mr. Biden announced Wednesday that Vice President Kamala Harris will lead the administration efforts with Mexico and the so-called Northern Triangle countries – El Salvador, Guatemala, and Honduras – in helping them stem migration at the southern border. He made the statement at a meeting with his Homeland Security and Health secretaries and other immigration advisers. It’s Mr. Biden’s first specific assignment for Vice President Harris, a signal of its importance.

Mr. Biden and his team have stated repeatedly in recent days that now is not the time to head for the United States. The U.S. has also worked to get the message out through social media, TV, and radio throughout Central America and Brazil. But it’s not clear how effective such messages can be.

“Joe Biden saying, ‘Don’t come,’ is important,” he says, “but the administration has to be realistic about whether that message is actually going to carry weight – and frankly, whether the individuals who are considering immigration are even going to hear that message.”