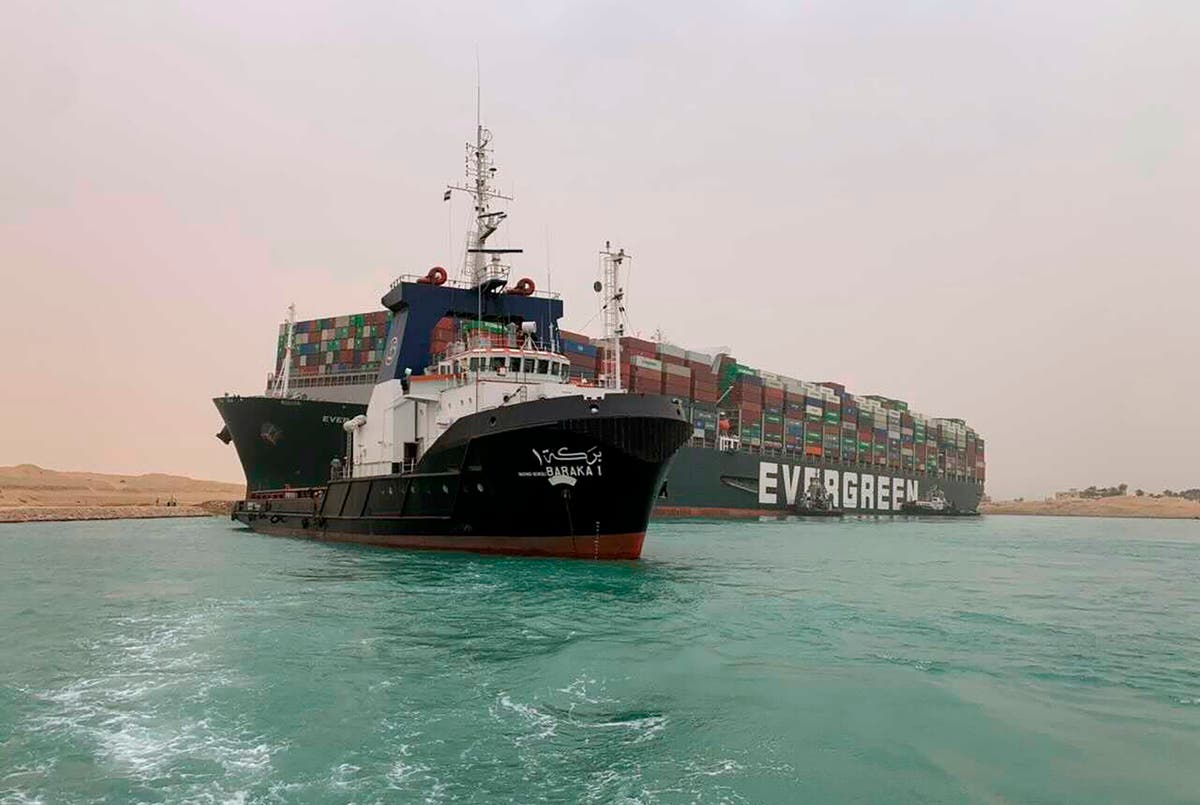 The massive container ship blocking one of the world’s most important shipping routes remains aground two days after it first became wedged midway along the Suez Canal.

Tugboat teams and heavy machines are still battling to nudge the MV Ever Given free as more than 150 shops queue to get past and the ship’s owner apologises for the inevitable knock-on effect on global supply chains.

It lies helpless in Egypt’s historic Suez Canal, which was opened in 1869 to create a channel between the Mediterrean and the Red Sea that allowed cargo vessels to pass between Europe and Asia without having to make interminable journeys through the south Atlantic, around the Cape of Good Hope and into the Indian Ocean, the passage today accounting for approximately one-tenth of the world’s seaborne freight.

How long is the ship?

The Ever Green is a behemoth, stretching 400 metres or a quarter of a mile in length and 58.8 metres across, which is no small part of the problem.

It is one of the largest ships of its kind in the world and weighs an astonishing 220,940 tonnes, with the capacity in place to carry 20,124 20-foot equivalent unit containers.

To put it another way, it’s longer than four football pitches and is 20 times heavier than the Eiffel Tower with a top speed of 22.8 knots, or 26.2mph.

When was it built?

The mega-ship was assembled by Japan’s Imabari Shipbuilding, with work commencing on 25 December 2015.

It was first launched at sea on 9 May 2018 and completed the following autumn on 25 September.

The Ever Given is owned by Shoei Kisen Kaisha Ltd of Japan but operated by the Taiwanese shipping giant Evergreen and registered in the Port of Panama.

Is the Suez Canal a two-way traffic system?

Yes it is – and the Ever Green is currently blocking the passage of ships in both directions, with vessels currently queueing for entrance at Port Said to the north and Port Tewfik to the south.

The stranded ship itself was heading north towards the Port of Rotterdam in the Netherlands from China when it ran into difficulties.

While attempting to pass along the Suez Canal on Tuesday, the Ever Given was struck by 30mph winds, which caused it to drift off course and its hull to become stuck in the canal bed, the length of the vessel blocking the entire channel and preventing any other ships from squeezing past in either direction.

Since then, eight tugboats working with diggers removing sand from the bank have been working tirelessly to refloat the ship.

“The Suez Canal will not spare any efforts to ensure the restoration of navigation and to serve the movement of global trade,” lieutenant-general Ossama Rabei, head of the Suez Canal Authority, has said.

Bernhard Schulte Shipmanagement, the company that manages the ship, has said that all 20 of its crew are safe and that there are “no reports of injuries or pollution”.

But with traffic backed up, there has been speculation that the stranded vessel could become a target for terror attacks while the business community frets over the consequences of the delays to cargo delivery for the global economy.

“Even the slightest delay in traffic can result in congestion and disturb the delivery of goods and commodities on both sides,” analysts at S&P Global Platts have warned.