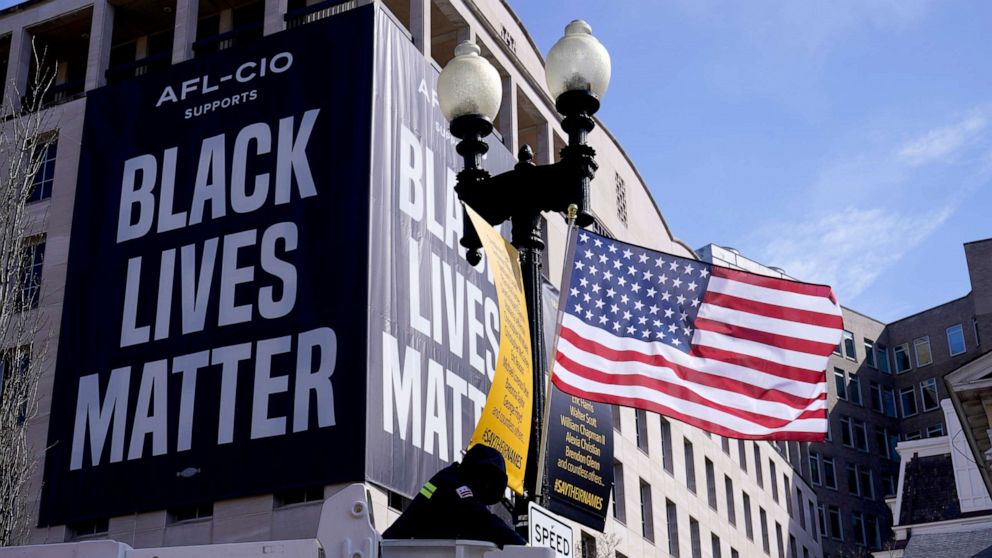 From the White House to Capitol Hill, American flags — with 51 stars — were displayed over the weekend at the direction of Washington Mayor Muriel Bowser.

The flags lined Pennsylvania Avenue to bring attention to the district’s bid to become the 51st state, just days before Congress is set to debate the issue.

It was a subtle gesture by Bowser, who will testify on Monday before the House Oversight Committee on District of Columbia statehood.

Rep. Eleanor Holmes Norton, the Democrat representing the district as a non-voting member of Congress, drafted a bill which would turn the city into the 51st State of Washington, Douglass Commonwealth — named after abolitionist Frederick Douglass — and give the city’s roughly 700,000 residents voting representation in the House and Senate. It will be voted on later this year.

Several miles of federal buildings and monuments — including the White House, Capitol and Supreme Court — would be redrawn as the new federal capital of the United States.

Lawmakers plan to examine “the three prerequisites Congress has generally considered in admission decisions as well as Congress’s constitutional authority to admit the District of Columbia as a state and reduce the size of the federal district.”

Another issue expected to come up during Monday’s hearing is the Jan. 6 attack on the Capitol, which left 140 police officers injured and five people dead.

Due to Washington’s status as a federal district rather than a territory, Bowser, the city’s top elected official, was unable to call up the National Guard to support overwhelmed Capitol police officers during the assault.

Currently, only the president, secretary of defense and secretary of the Army can call up the D.C. National Guard, not the mayor.

It is the only National Guard unit in all 54 states and territories that can only report to this chain of command.

Oversight Chairwoman Rep. Carolyn Maloney told ABC News, “The horrific events of Jan. 6th epitomized the need for D.C. statehood. Each of the 712,000 tax-paying D.C. residents deserve to have their voices heard in Congress and have elected officials with the ability to protect them from domestic terrorists, as happened on Jan. 6th when the D.C. Metropolitan Police and National Guard came to the assistance of the Capitol Police.”

She said she’s looking forward to Monday’s hearing and to “harnessing the momentum around D.C. statehood to pass H.R. 51 out of the Oversight and Reform Committee and the House of Representatives for a second time.”

In a letter to district residents on Friday, Bowser, a Washington native, wrote, “For 220 years, the injustice of taxation without representation has lived on in Washington, D.C. But now our nation has the opportunity, and a clear path forward, to finally right this wrong.”

She continued, “We know: the time for DC statehood is now. The time to end the disenfranchisement of more than 700,000 taxpaying Americans is now.”

The bill was approved by Congress for the first time in June 2020, with all Republicans opposing the measure and all but one Democrat supporting it. (That Democrat, Rep. Collin Peterson of Minnesota, lost his reelection bid last fall.)

That’s a far cry from the 1993 vote for statehood in the House, when more than 100 Democrats voted with Republicans to overwhelmingly reject the measure — including Rep. Steny Hoyer of Maryland, who now serves as House majority leader and a co-sponsor of the legislation.

At the time, some Democrats argued that the change would complicate the administration of the nation’s capital, even as they acknowledged that the city’s status meant its residents would not be represented in Congress.

Local lawmakers such as Hoyer had opposed the push for statehood in part because they feared it would allow the district to impose a commuter tax on Maryland and Virginia residents entering the city for work, according to a 1993 Washington Post report.

Since then, the issue has moved from a fringe proposal from local activists to one that has garnered unanimous support from Democratic Party leaders and is mentioned in the same breadth as voting rights legislation on the party’s agenda.

Beverly Perry, Bowser’s senior adviser, told ABC News,”under this mayor’s administration what we’ve tried to do is educate people that this is a civil rights issue.” She said, “Instead of referring to it as statehood, I will refer to it as disenfranchisement for residents of the District of Columbia.”

Perry said that when the founders created a federal district, they didn’t realize they were disenfranchising natives in Washington.

With a shift in power in Washington, and Democrats leading the House and Senate, advocates, for the first time in decades, see a path forward for their push to make the District the 51st state.

Republicans have long been critical of the push to make the District of Columbia the 51st state, and have accused Democrats of attempting to consolidate power in Congress — given the likelihood that the state’s Senate seats would be filled by Democrats.

“D.C. statehood is all about Speaker Pelosi and liberal Democrats consolidating their power to enact radical policies nationwide like the Green New Deal, packing the Supreme Court, and eliminating the filibuster. The Democrats’ bill is unconstitutional and no amount of testimony can change that basic fact,” Comer said. “The bill does not address the financial burden that would fall on the District if statehood was granted or other practical implications. H.R. 51 doesn’t rest in sound policy and is a dangerous political power grab that will ensure more government intrusion into Americans’ daily lives.”

Norton, the author of the statehood bill, predicted that the statehood measure would pass in the House again this year and force a reckoning in the Democrat-led Senate over the legislative filibuster — the rule that prevents legislation from advancing without the support of 60 senators.

Many liberal activists and Democrats have called on the Senate to change the rule in an effort to prevent Republicans from thwarting their agenda in the evenly-split Senate.

Biden, in an interview with ABC News’ George Stephanopoulos last week, signaled openness to tweaking the rule to force Republicans to talk on the Senate floor in order to block a bill from advancing.

Since last year’s vote, advocates have launched a public relations campaign to raise awareness for their effort — working to draw Americans’ attention to the fact that 700,000 people live in the capital without representation in Congress, despite paying more federal taxes than many in other states.

“The American people did not know just how unequally treated the people who live in their own nation’s capital have been,” Norton told ABC News.