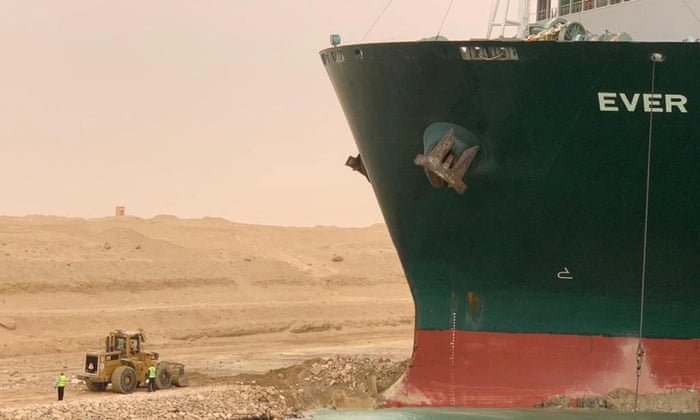 It is the David and Goliath story of our times: one of biggest container ships in the world got stuck in the Suez canal, blocking a route through which 12% of the world’s trade passes – and sent to rescue it was a very small bulldozer.

2 guys and a bulldozer on site to dislodge a ship stuck in the Suez Canal. pic.twitter.com/APAIU7sCv6

Online, the slow-moving crisis was quickly turned into a learning experience: memes 101. The overarching theme was futility: of work in the face of a never-ending number of things to do; of $1,400 stimulus checks in response to the coronavirus pandemic; of drinking in the face of “the incessant, crushing weight of existence”.

This is my favourite meme format in a long time pic.twitter.com/p7XOuC43PU

Today’s Comic: We are all, in our own little way, that ship. pic.twitter.com/GVDjLxzErX

Austin Powers was an early reference, thanks to a scene in which the British spy attempts to perform a U-turn in a narrow passageway.

Some were able to relate the crisis to their own traffic and parking-induced stress:

Some turned to poetry:

this is just to say
i have
blocked
the suez

which you
probably needed
for international
trade

forgive me
im sideways
and my ship ass
is big

Others resorted to profanity:

By Wednesday afternoon the ship had been partly refloated, said GAC, a Dubai-based marine services company, citing information from the canal authority. “Convoys and traffic are expected to resume as soon as the vessel is towed to another position,” it said on its website.

But ship broker Braemar told Agence France-Presse that it could be a while before the ship is moved. If tugboats are unable to pull it free, containers may have to be offloaded to make the vessel lighter, which could, said Braemar, “take days, maybe weeks”.

White House chaos: Biden set to be replaced as US President – and not by VP Kamala Harris