The container has been stuck for four days and the blockage is costing over £7 billion in traded goods a day according to News. John Denholm told the BBC’s Today Programme that the container should be removed by tugs and bigger diggers in order to provide a quick fix to the problem. The 400 metre Ever Given, almost as long as the Empire State Building is high, is blocking transit in both directions through one of the world’s busiest shipping channels for oil and refined fuels, grain and other trade linking Asia and Europe. Late on Thursday, dredgers were still working to remove thousands of tonnes of sand from around the ship’s bow.

The BBC’s Martha Kearney asked: “So we are talking weeks, aren’t we?”

Mr Denholm said: “If we go through the lightning process I suspect we are talking weeks.

“Therefore it is worth pursuing the tugs and digger process.”

The BBC host replied: “So you still think there is mileage in that if you can get the bigger diggers and tugs in?” 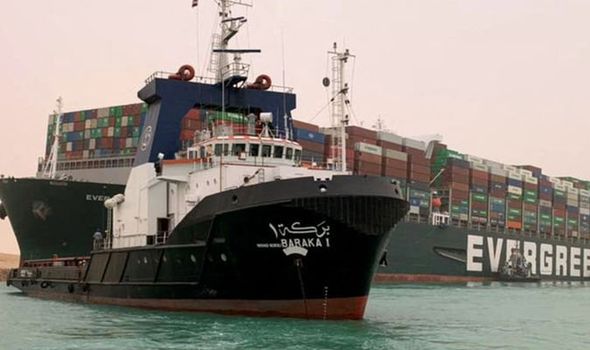 Mr Denholm added: “Yes because it is a quick fix.”

Guy Platten, the Secretary General of the International Chamber of Shipping also spoke to the BBC’s Today programme regarding the disruption caused by in the Suez canal.

Mr Platten said: “We’re hearing reports now that shipping companies are starting to divert their ships around the southern tip of Africa, the Cape of Good Hope, which adds about 3,500 miles to the journey and up to 12 days,”

He added: The blockage will lead to “some major real-world effects on the supply chain”.

Suez Canal blocked after cargo ship Ever Given turns sideways