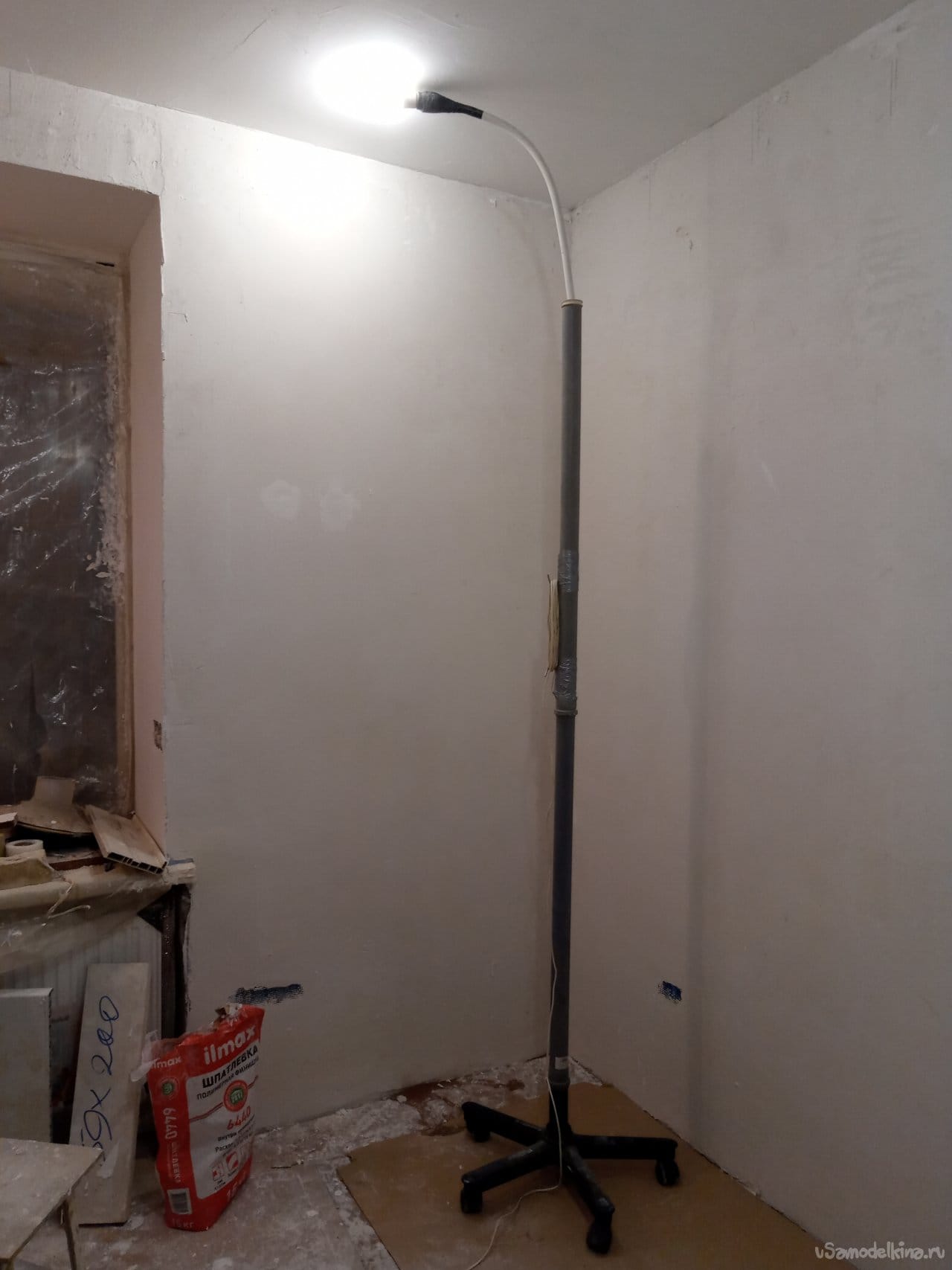 In one of my previous publications I told you about how I made a plasterboard suspended ceiling. It's time to finish. The ceiling must be filled and then painted.
Everyone who has been involved in such work knows how important it is to properly illuminate the place of work. This is especially important when cleaning the putty surface. And at the same time, the light, preferably, should not fall perpendicular to the surface to be treated, but at the smallest angle to it, as if in passing. Only then do all the smallest flaws become visible.
For this I made carrying lamp , which I successfully use when grinding wall surfaces.
But, when finishing the ceiling, which is made of plasterboard (read – a flat plane), the specifics of the work are slightly different. The wall has many irregularities. And you need to align them. This is achieved by applying several layers of putty. By applying the mass with wide, sweeping movements of the trowel, we fill in these smooth concavities, and apply a smaller layer to the bulges. Several layers have to be applied because a thick layer of putty (which forms in the “pit”) gives strong shrinkage when it dries. In any case, then it is necessary to carefully clean the plane with an emery cloth, gradually reducing its grain size …
If we putty a drywall ceiling, then, first of all, the seams and screws are leveled, and then we just need to create a flat putty plane on a flat drywall plane. One layer of finishing putty is enough if we manage to apply it very evenly.
If you illuminate from the side, as is done during stripping, there is such an opportunity! It is immediately visible if the next smear with a spatula, or with a scraper leaves a thicker layer, or there is a scratch from the debris that has got into the putty, or a lump that has not dissolved .. Then you can iron it with a tool a few more times and eliminate this deficiency.
But, unfortunately, no one uses a light bulb when filling, although that would be convenient. But, there really is no way – the second hand must be free so that the putty can be applied with a small spatula on a wide one, or on a half-trowel platform (who is more convenient to work with). And (most importantly), no matter how hard you try, your hands are dirty, wet and sticky …
The idea of ​​making some kind of lamp holder, pressed against the ceiling, appeared for a long time – even when fifteen or twenty years ago I was doing repairs associated with filling for the first time. But then there was nothing of which, and, most importantly, “there is no time – the work is worth it.”))). And, after that, it became irrelevant.
And now, again, finishing the ceilings! … This time I began to think in advance about the convenience of work!
And I made a lamp with the requirements described above. (Notice how the wall surface appears to be flat when it is turned on!) 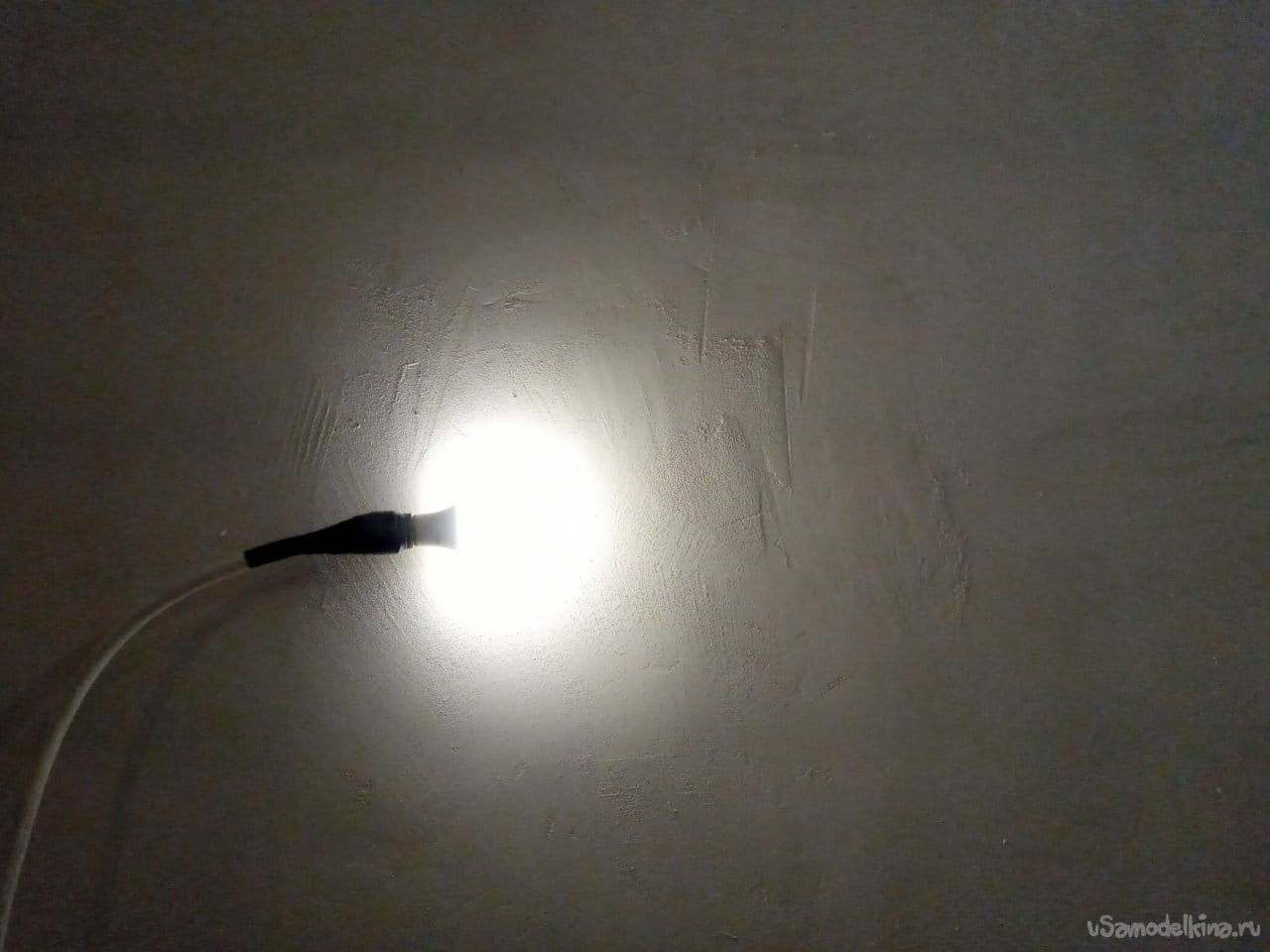 And that's what I need for this came in handy:
1. Bottom of a broken office chair (“spider” with wheels).
2. Sewer pipes for internal sewerage, with a diameter of 50 mm.
3. Cartridge E-27
4. A piece of metal-plastic pipe.
5. Insulating tape (And what about without it?)))).
6. ShVVP cord 2×0.5.
7. Power plug.
From the very beginning, I was not going to make some solid specialized design. I don’t do this work professionally. I think (at least I hope))) that these ceilings in my life will be the last ones made by my hands))). But, while there are a lot of them, so I will adapt – there is a sense …
First of all, I began to think about what to use as a basis. A crosspiece from an old fan? Not stable. Knock down a wooden crosspiece? … It's dreary … There is not much time .. And then I remembered the office chair recently dismantled for spare parts, in which the “spider” itself had become unusable.
As you can see, one “paw” broke off. But, for my purposes, stability is enough! In addition, it is also on wheels – it will be convenient to move directly from the “goat”. Now you need to make the rack itself from something. It should be high (up to the ceiling), and be able to adjust the height – the ceilings in my house have different heights. From two meters, eighty centimeters, to three meters forty centimeters … I will not do the same every time!
.. Initially there was an idea to use metal-plastic pipes, as I did in my ” garage lamp “, which I now successfully use to illuminate “fields of activity” at a construction site. But this time I need a lot of height. Metalloplast will not give the required stiffness. It will bend under its own weight, not like holding a light bulb … But when I measured the diameter of the “spider” stand, I immediately found a solution. The fact is that its outer diameter turned out to be exactly 50 mm! That is, a plastic pipe for the internal sewage system, which I have at the construction site, will be tightly put on it with a bell. I have prepared two pipes one meter each:
Taking into account the height of the stand, it turned out roughly, two and a half meters. A little less, perhaps … And so it was intended. After all, the upper part of the stand must be made flexible, or springy, necessarily bent to the side (so that the lamp shines “casually” along the ceiling) and adjustable in height.
I decided to make it from metal-plastic. Fortunately, I have its remnants: 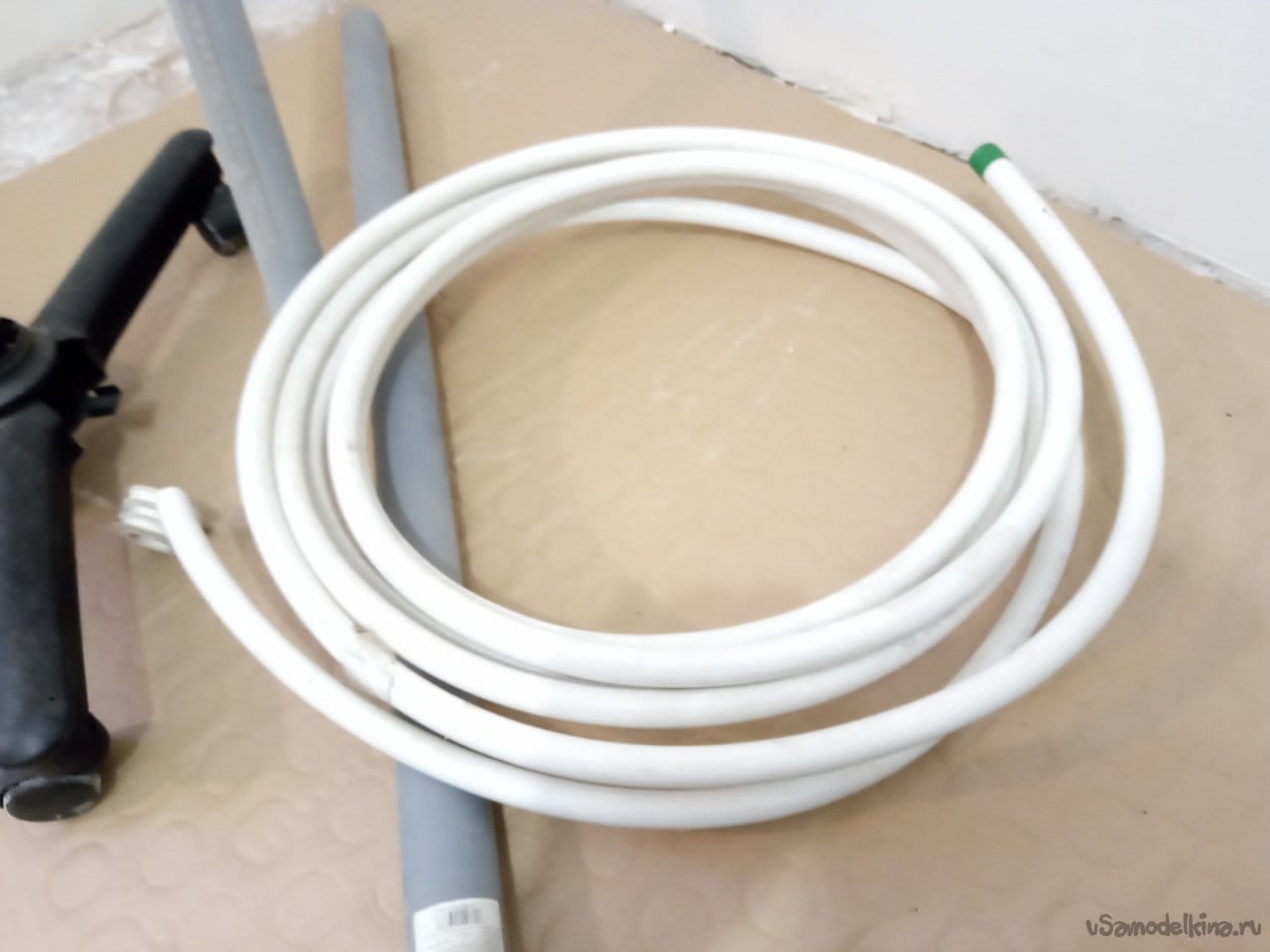 fixed the E-27 cartridge at the end of the metal-plastic: 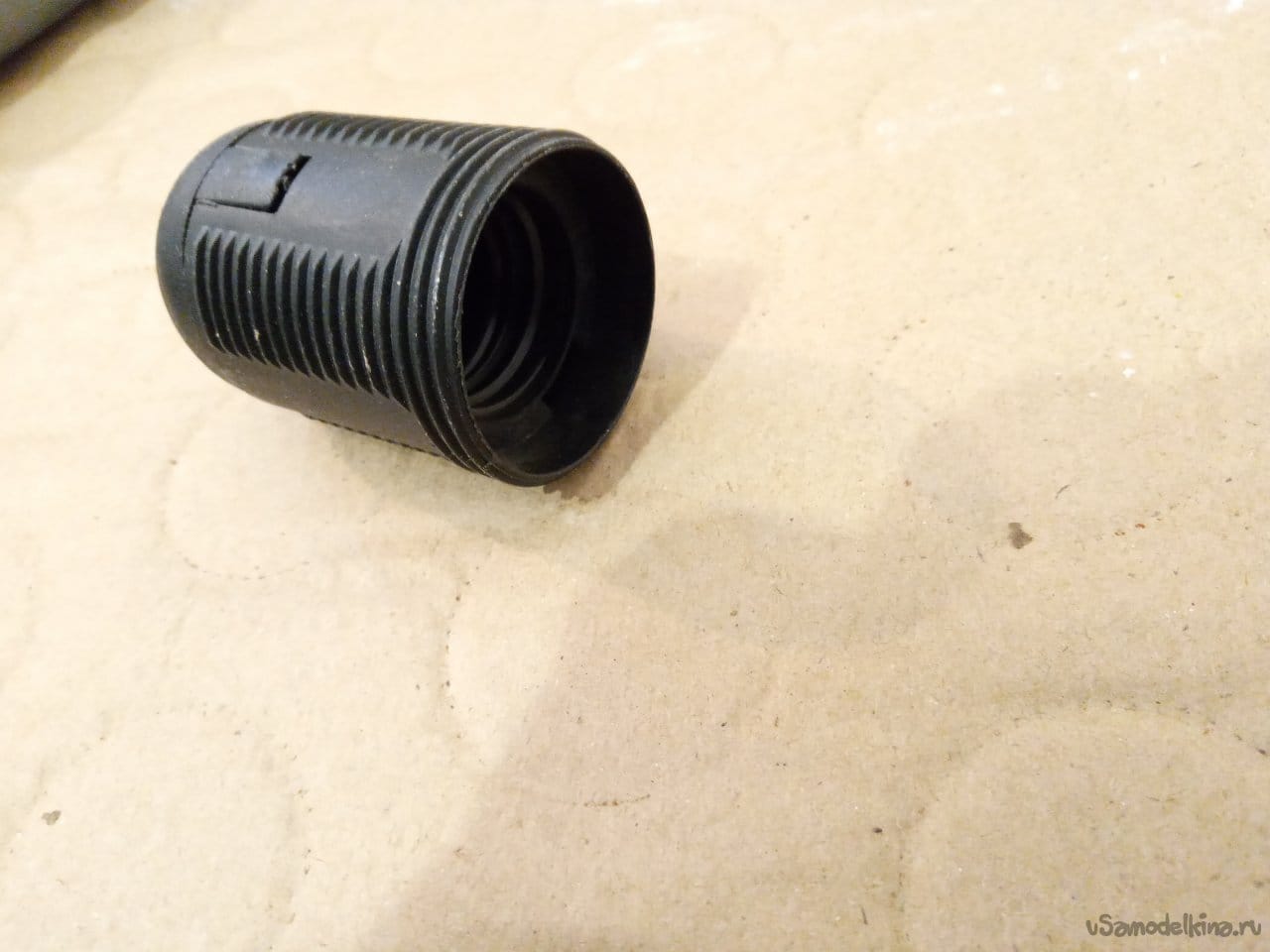 Without further ado, I dismissed the end of the pipe in two parts, put a cartridge between them and wrapped it with electrical tape: 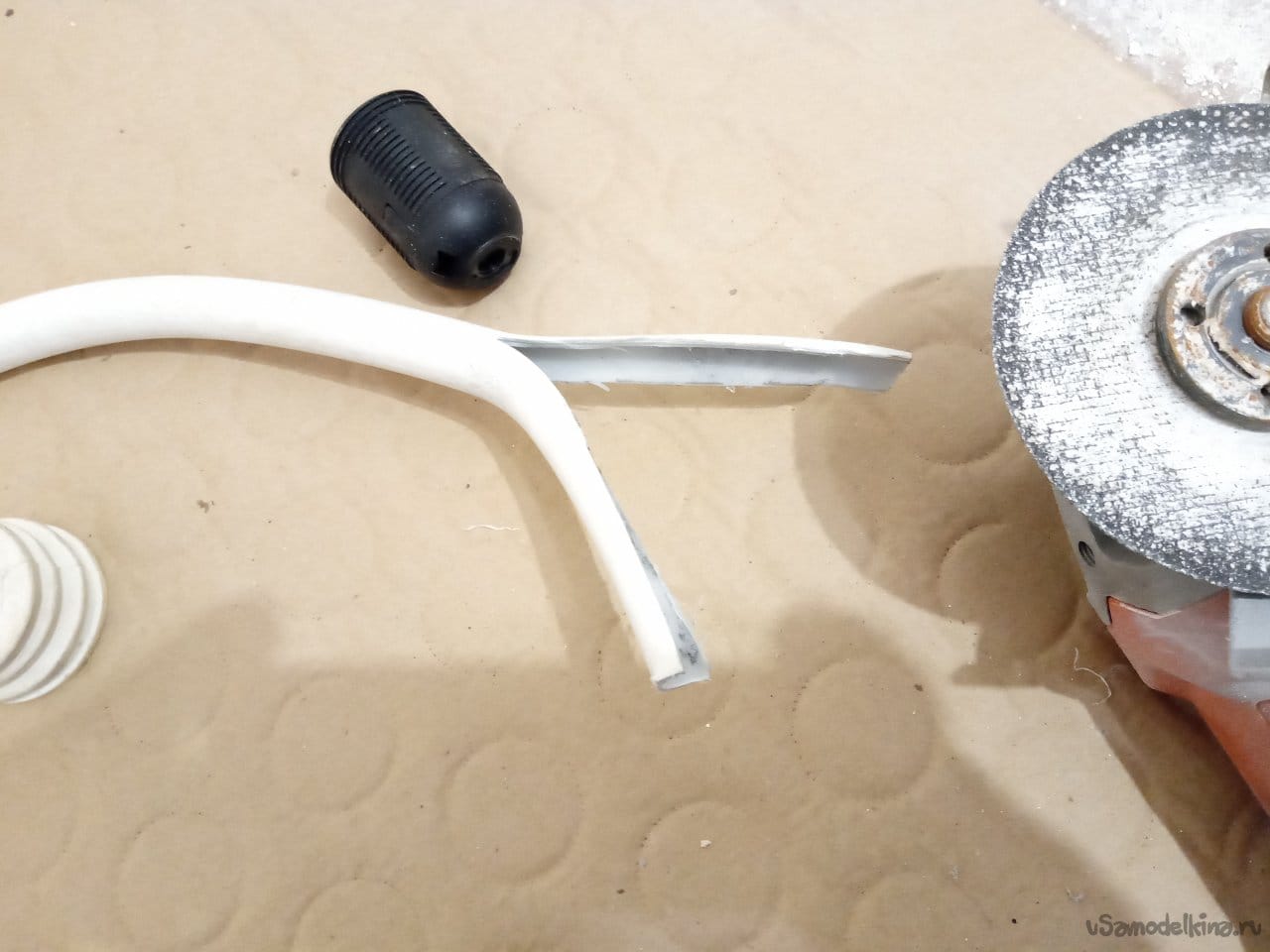 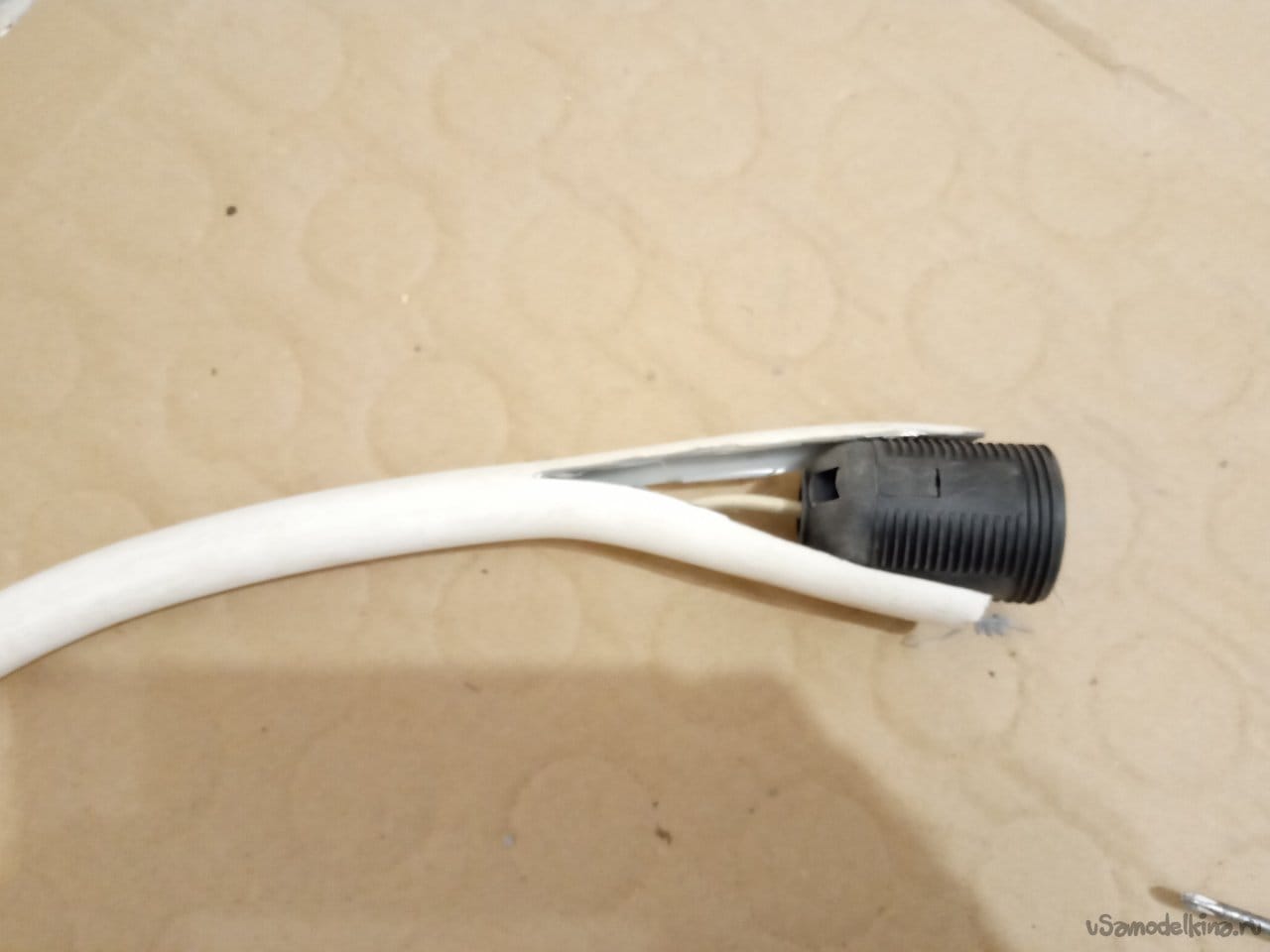 I decided not to pass the SHVVP cord 2×0.5 through both sewer pipes. “Forever” I decided to adapt only one of the pipes for the lamp. And there you can already build it up to the desired height, installing additional sections of the required length (As I said, I have to work with ceilings, the height difference of which is 80 cm).
I passed the cord through the pipe, and, at the very bell, let it out, drilling a hole: 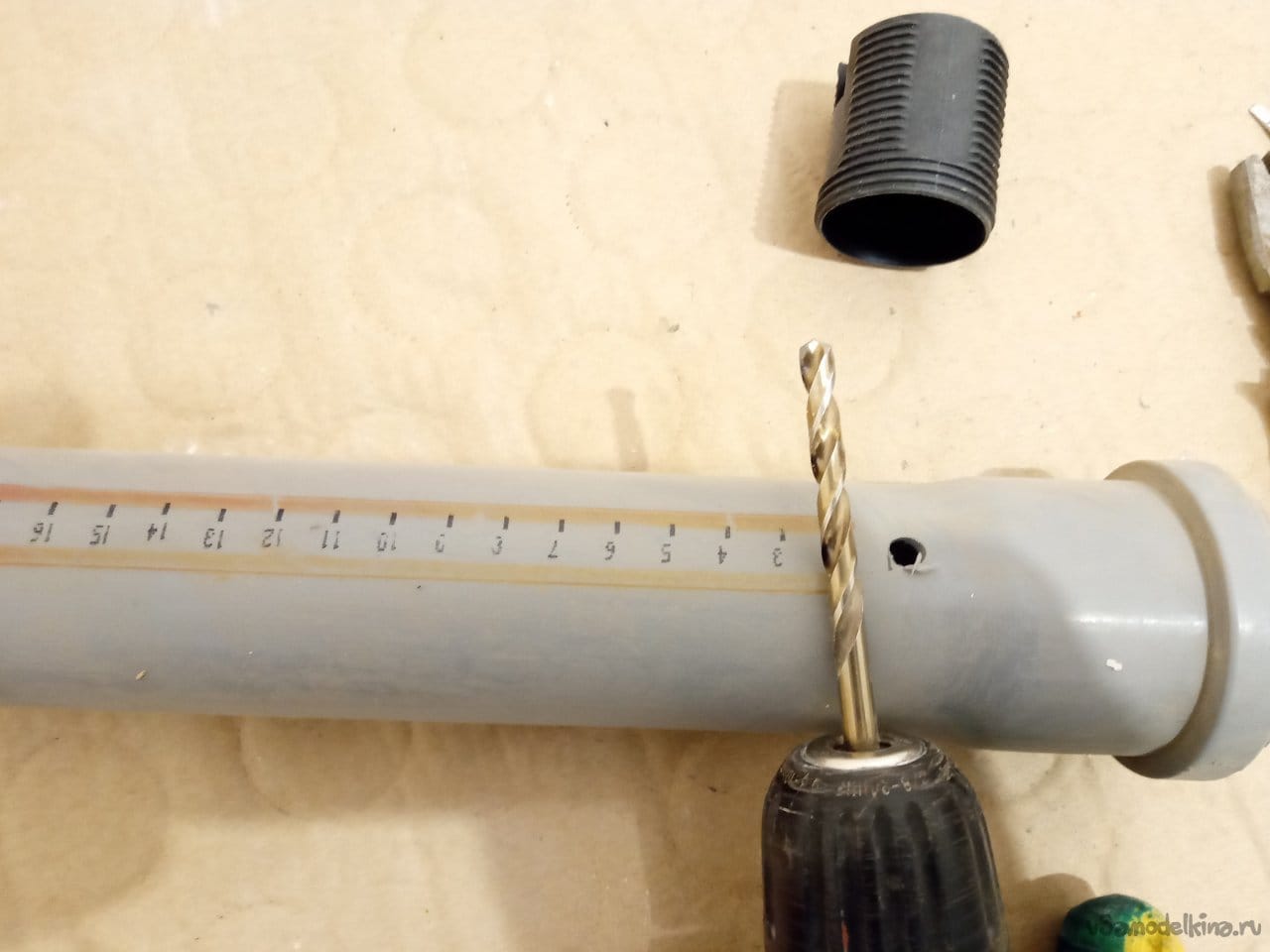 Having estimated the desired length, I I made just such a loop in front of the hole so that, in case of an accidental jerk, the cord does not break out of the cartridge. The loop will not go through the hole: 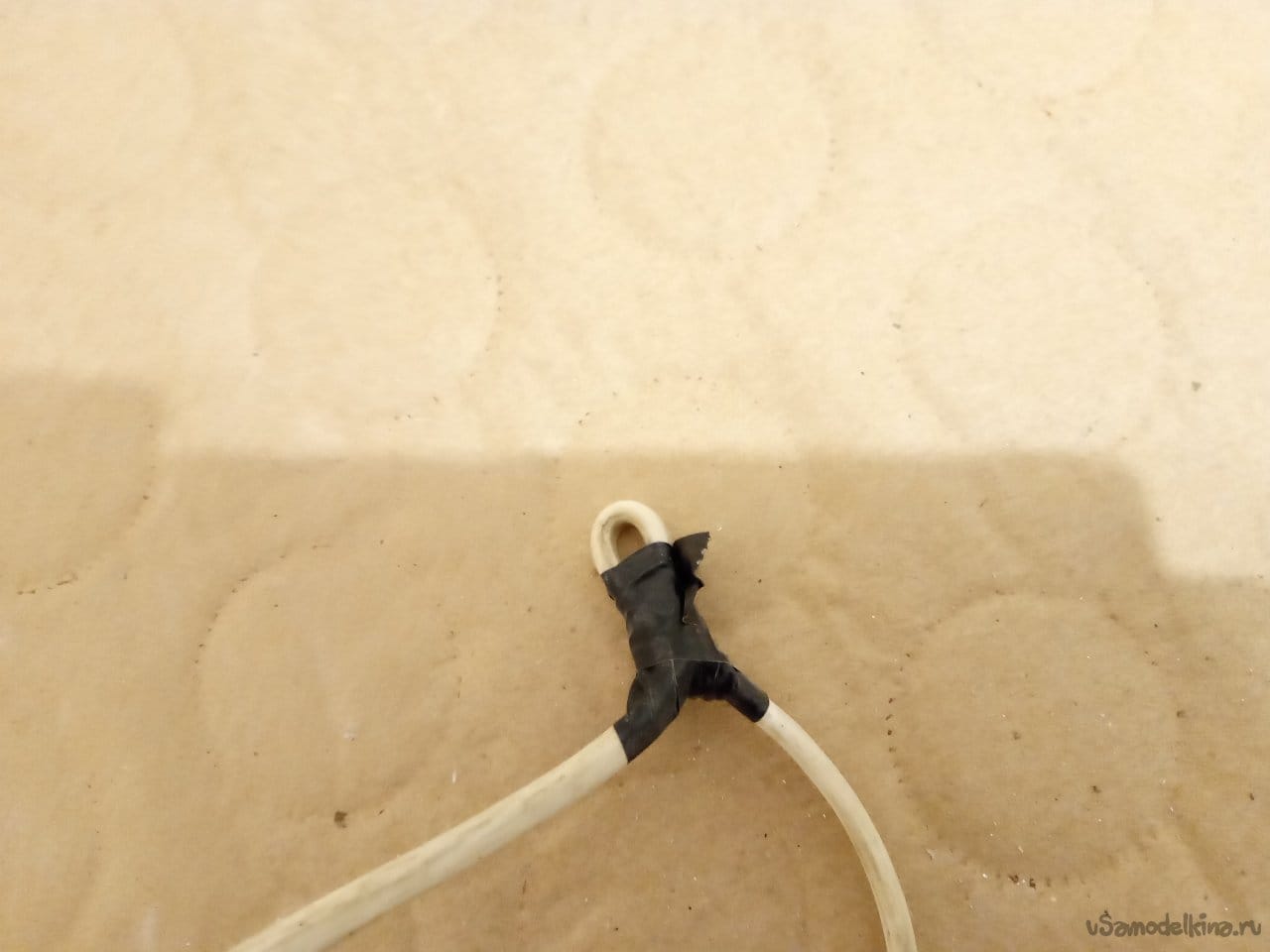 It remains to think about how to place the metal-plastic in the sewer pipe so that, firstly, it does not fall inside, and secondly, so that it can be pulled/sunk a little, thereby “finely” adjusting the height. Initially, I thought to simply bend the metal-plastic with a “snake” before pushing it into the pipe, but it does not have sufficient elasticity, and after several pulls/sinks, the snake straightened and the upper part sank under its own weight. Then I found a piece of steel, springy wire, bent it and tied it to the “snake”, which increased its elasticity:
Even at the stage of searching for the necessary components, in a box with plumbing I found just such a cuff-adapter from diameter 50 to diameter 20:
And I decided to put it on metal-plastic (I have it – with a diameter of 16 mm) and, after having made the “spring part” and inserted it inside, insert the cuff into the end of the sewer pipe. This will reduce the “walking” of thin metal in the pipe at the exit from it.
So I collected it: 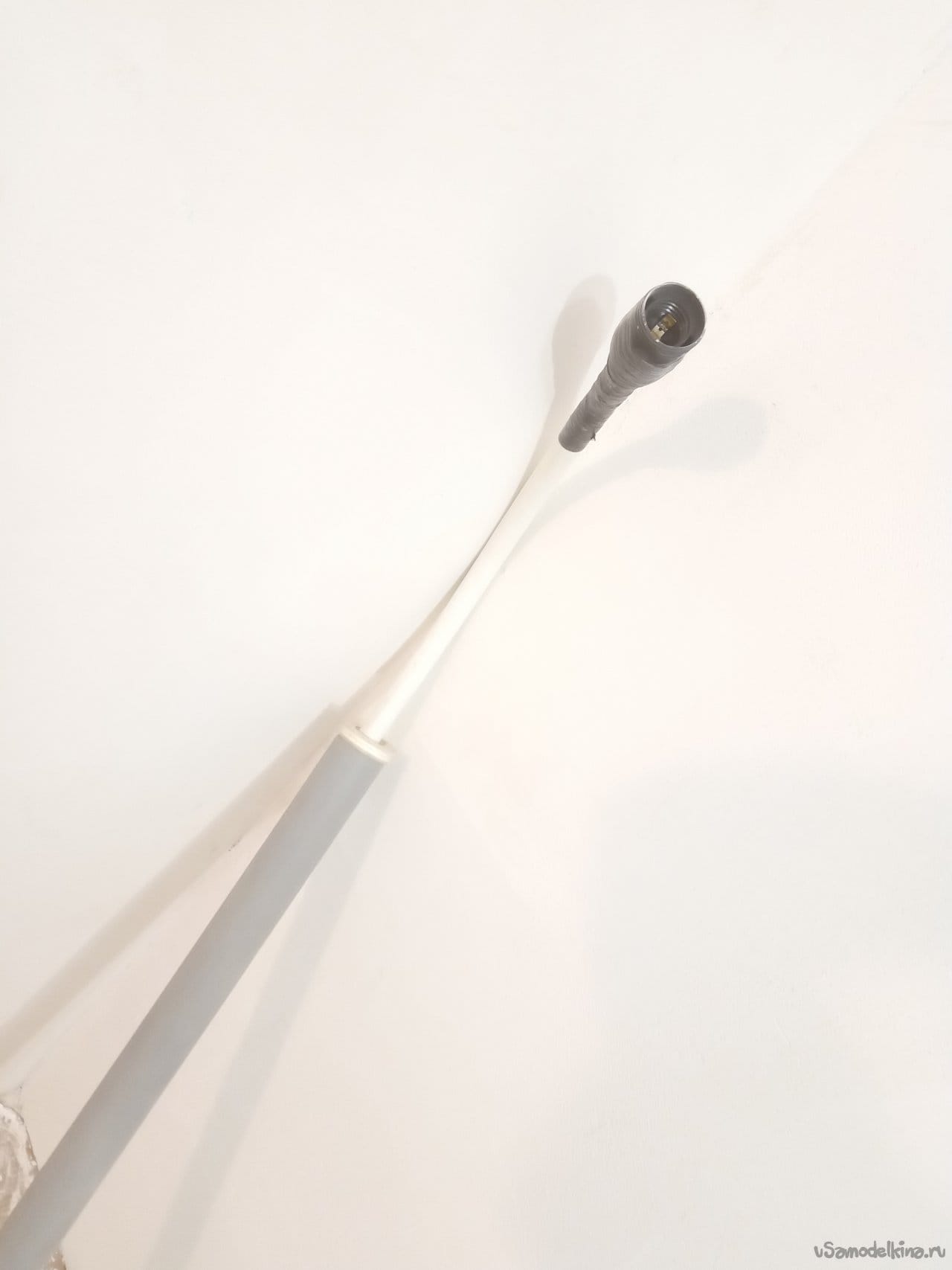 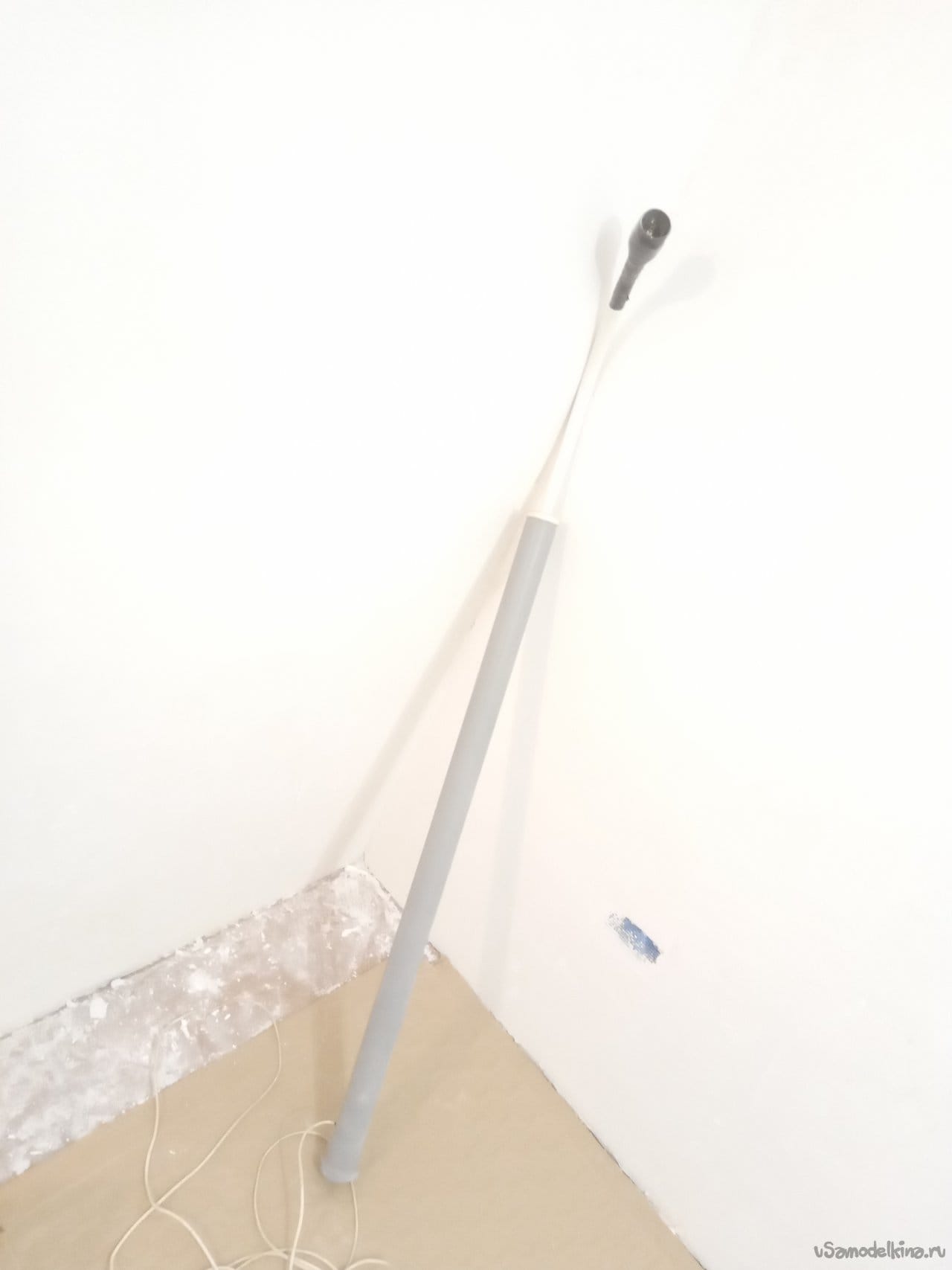 The metal-plastic insert, if necessary, can be pushed out or pushed in. The “spring element” perfectly holds it in any position. At the same time, it can be turned in any direction.
Now we need to somehow organize the storage of the cord when the lamp is not in demand. I hate it when the cord lies just next to it, coiled up in a ball, which necessarily unwinds when the device itself is moved and gets tangled in everything that it is possible to catch on.
The simplest option is two brackets on the pipe, similar to how we made in childhood “organizer” for fishing line on homemade fishing rods.
Brackets arched out of nails:
And tied them to the rack with household adhesive tape: 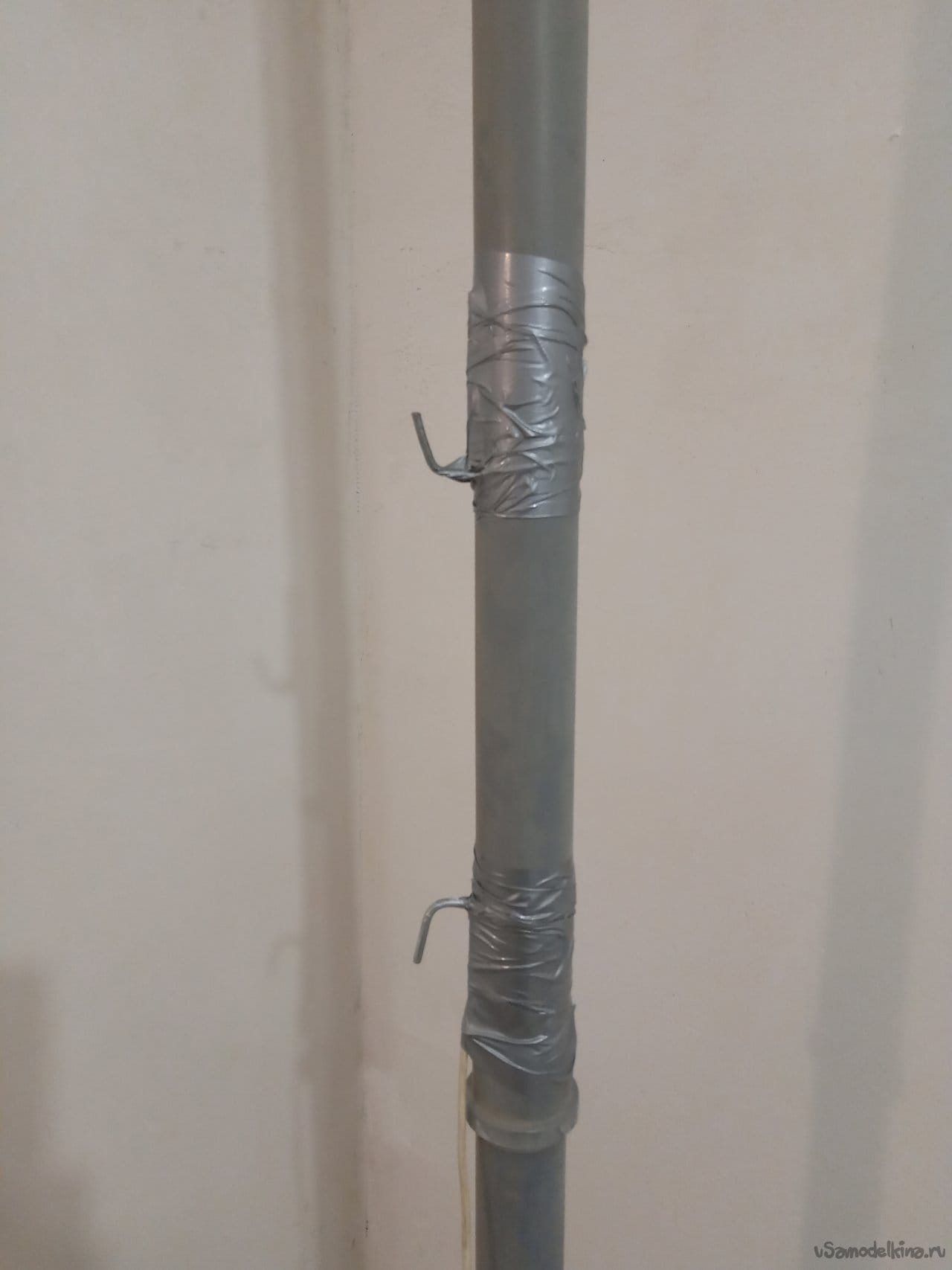 Now the cord can be easily wound and it won't get confused:
That's all. The lamp (if you can call it that) is ready!
At the time of this writing, it has already been tested in work. Very convenient indeed. You can highlight any desired section of the ceiling, and, most importantly, from the right side and at the right angle! And it is also very convenient that you can easily roll it to another place without getting off the “goat”.
And when I had a need to work with a ceiling of a different height, I simply replaced the lower meter pipe with one and a half meter. And it took a minute!

Sculpture made of wood and epoxy resin

Arched canopy over the entrance, not difficult and budget