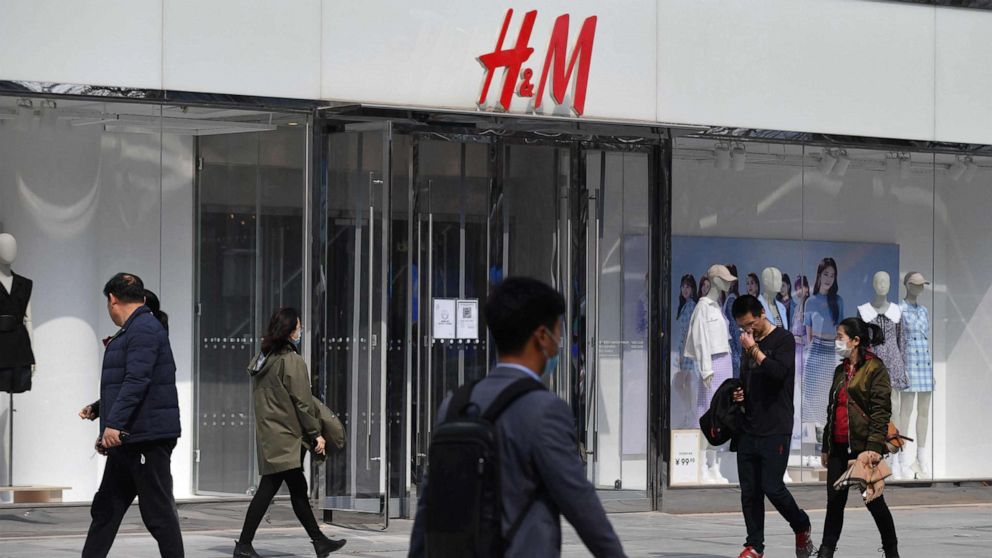 HONG KONG — Calls of boycott and anger have erupted in China against Nike and Swedish clothing giant H&M after Chinese netizens unearthed old statements from the brands taking a stand against cotton sourced from the northwestern Chinese region of Xinjiang over concerns of reports of forced labor involving the Muslim Uyghur minority.

Tensions between western countries and China have now spilled over into the realm of fast fashion and sportswear.

Nike and H&M’s statements, along with those of other international brands such as Adidas, Gap, New Balance and Zara parent company Inditex resurfaced soon after the United States, Canada, the United Kingdom and European Union jointly condemned China’s years-long crackdown on Uyghurs and sanctioned Xinjiang government officials.

China had vowed retaliation with its own sanctions against Western officials.

Patriotic users on Chinese social media platform Weibo are calling for the international brands to “get out of the Chinese market” for “smearing Xinjiang cotton.”

By Thursday morning Nike and H&M each lost two of their Chinese brand ambassadors. Chinese actor Huang Xuan announced that he was terminating his relationship with H&M and said that he “firmly opposed any attempt to discredit the country.” Pop idol Wang Yibo followed suit and dissolved his relationship with Nike on Thursday.

Searches for H&M began to yield no results by Wednesday evening on Chinese e-commerce sites like T-mall, JD.com and Pinduoduo. Wuika Times Square, a mall in Xinjiang’s capital of Urumqi, reportedly demanded its H&M outlet to remain closed until the company “makes a solemn apology to the people of Xinjiang.”

The huge and lucrative Chinese market is increasingly important for international brands as retail elsewhere in the world is still being battered by coronavirus restrictions. China’s commerce rebound and boomed for much of 2020 once it was able to get the pandemic under control within its own borders.

Last quarter alone, Nike’s earnings in Greater China exceeded its revenue in the U.S. and Canada by more than $3 million despite strong sales at home.

Online, fervently nationalistic patriots known colloquially as xiaofenhong or “Little Pinks” began posting memes creating Chinese state media with slogans like “I support Xinjiang cotton” and posters reading “The Chinese market mighty, but will not welcome those with malicious intentions.”

One response even paraphrased the tough words top Chinese diplomat Yang Jiechi exchanged with U.S. Secretary of State Antony Blinken in their heated remarks in Alaska last week. Instead of “The Chinese people won’t stand for this,’ it’s now “Xinjiang cotton won’t stand for this.”

The H&M statement that ignited the controversy appears to be at least a year old, issued in a response to a March 2020 decision by the global non-profit Better Cotton Initiative (BCI) to no longer source its “Better Cotton” product from Xinjiang over concerns of forced labor.

H&M China released a statement on Weibo late Wednesday saying the company “does not represent any political position. H&M Group purchases more sustainable cotton through a globally certified third party. The purpose is to support cotton farmers around the world to adopt more sustainable methods to grow cotton. H&M Group does not purchase cotton directly from any supplier. H&M Group respects Chinese consumers as always. We are committed to long-term investment and development in China.”

As the controversy spreads, Chinese domestic brands like the celebrities have decided to a pick sides: Beijing’s. Chinese sportswear brand Anta has doubled down on using Xinjiang cotton and announced they were going to quit the Better Cotton Initiative altogether.

“We have noticed the BCI’s statement. We are deeply concerned about the matter and is starting the process to exit the organization,” Anta said in its statement posted on Weibo.

“We have been purchasing and using cotton produced from China, including Xinjiang region, and we will continue to purchase and use cotton from China.”

Chinese netizens have also noticed that even before the current firestorm another domestic sportswear brand Li-Ning already had clothing tags that proudly stated that they using Xinjiang cotton sourced by the Esquel Group, whose Xinjiang-based subsidiary Changji Esquel Textile Co. Ltd. was sanctioned by the US last year.

On its final day in office, the Trump administration said China’s treatment of the Uyghurs constituted “genocide” and “crimes against humanity,” a designation the Biden Administration has maintained.

Beijing has repeatedly denied any human rights abuses in its policies in Xinjiang and recently has been more forceful in its pushback. In February, Chinese Foreign Ministry Spokesperson Wang Wenbin calling the genocide designation “the lie of the century deliberately fabricated by extreme anti-China forces.”

China produces 22% of the world’s supply of cotton and more than 80% of China’s cotton originates from Xinjiang, the region’s largest export.

Earlier this year, U.S. Customs and Border Protection announced that it would detain all cotton products produced in Xinjiang.

CBP officials and human rights experts estimate that somewhere between 1 million to 3 million Uyghurs, Kazakhs and others are being detained in what former U.S. Secretary of State Mike Pompeo called “internment camps” throughout China’s Xinjiang province. There are about 1,300 of these facilities scattered throughout the region and they’ve allegedly forced detainees to work without compensation in nearby factories, according to those same officials. The Chinese claim that these facilities are “vocational schools” to deradicalize individuals and alleviate poverty.

Xinjiang is home to many ethnicities, most prominently Uyghurs, who are linguistically and culturally distinct from the Han majority in China.

Since the fall of the neighboring Soviet Union, some Uyghurs’ demands for more autonomy, fairer treatment, and their underlying friction with the influx of Han Chinese population resettling in the province have led to episodes of revolt and ethnic violence. Uighur anger boiled over in July 2009 when riots erupted in the regional capital of Urumqi, 197 died (mostly Han Chinese) and over 1,600 were wounded in revolts and attacks over several days, followed by a wave of arrests by the authorities.

In the following years, China was hit by a series of terrorist attacks, including suicide car bombings in Urumqi and in front of Mao’s portrait in Beijing’s Tiananmen Square as well as a deadly knife attack at the Kunming Railway Station that killed 31 people. Chinese authorities blamed all these attacks on Uyghurs indoctrinated by “foreign extremist thought” and Xi launched the “People’s War on Terror” shortly after one Urumqi attack occurred during his visit to the city in 2014.

The Chinese have touted the success of their campaign, saying it has not had a single terrorist attack since 2015. In addition, they justify the existence of the ‘vocational schools’ and labor in cotton industry as a means of tackling generational poverty in the Uyghur population.

In late February, Chinese president Xi Jinping announced that Beijing had wiped out extreme poverty across the country.