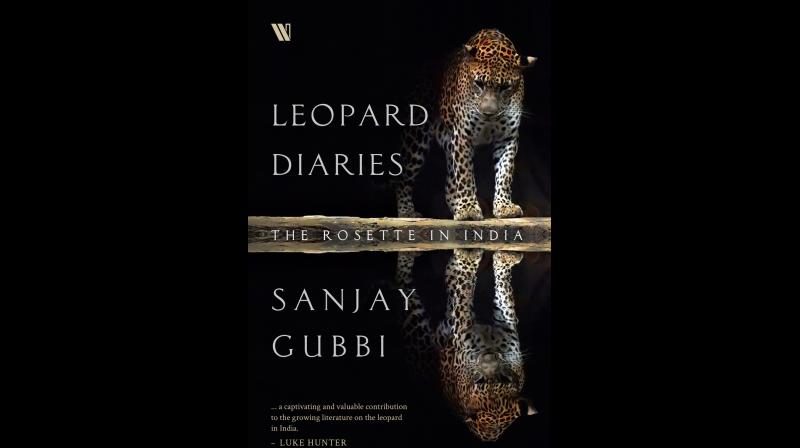 The leopard is perhaps one of the world’s most beautiful creatures. The spots on its body are even romantically called ‘rosettes’. However, in several countries, the leopard faces either ecological or local extinction—a worrying phenomenon.
In Leopard Diaries: The Rosette in India, Sanjay Gubbi, a scientist, conservationist and writer who has studied and documented the leopard for nearly a decade, gives a sneak peek into this fascinating creature—right from its food habits to how the young are reared. With a doctorate in leopard ecology and conservation, the self-taught conservationist has won several awards, including the Whitley Award (popularly known as the Green Oscars) in 2017. The author, who spent three years labouring to bring out this book, is also the recipient of the Co-existence Award, the Carl Zeiss Conservation Award.
Belonging to Tumkur District in southern Karnataka, which is part of the Deccan Plateau and is rich in dry area wildlife including leopards, Sanjay’s fascinations with the leopard began very early in life. “I grew up in leopard country. To me, leopard is a perfect carnivore. Its grace and agility and its stealth and camouflage abilities make it a captivating large cat,” explains Sanjay. “This has fascinated me immensely.”

However, despite its captivating beauty, leopards, which are found widely in India, are in trouble because of various threats. “Hence, if we need to find support for leopard conservation, we should reach out to the general public, policymakers, media and social media influencers,” points out Sanjay. “Besides, we need to get the attention of young conservation enthusiasts who are being misguided by ‘soap opera’, ‘reality show’ kind of conservation activities.”
Sanjay hopes is book will get a few wildlife biologists enthusiastic about engaging with real-world conservation. “Merely writing a nice scientific paper will not save wildlife. I hope the three years I put in authoring this book will help motivate people into wildlife conservation in whatever little manner possible,” he adds.

According to Sanjay, leopards didn’t receive due attention for decades, although there is some focus on this large cat these days. “Biologists from civil societies and government institutes have started to carry out studies to understand leopard populations although these are mostly focused on protected areas. However, leopards are found in big numbers outside the protected area network,” states Sanjay, whose study was the first in the country to undertake a comprehensive survey researching leopard populations in protected areas, reserved forests, agricultural landscapes and leopard habitats not protected under any laws. “I hope the study can be replicated in other parts of the country to get a good understanding of leopard numbers, so that it helps design management plans for their conservation.”

Leopard Diaries is based on Sanjay’s research, conservation work and observations from leopard habitats. His research had a multifaceted approach and includes camera trapping to understand leopard populations, occupancy surveys for understanding their distribution and drivers, studying human-leopard conflict, and policies towards leopard conflict. “It has taken my team and me nearly a decade and we intend to continue this in a much longer term,” he says.
The ecologist still believes that wildlife in India is still a matter of concern. In fact, according to him, changes are more sudden since the last decade.
“More and more wildlife habitats have been taken over by ill-planned development, laws and policies have been diluted, and this has reversed the centuries-old culture and tradition of a country that prioritised nature and wildlife conservation,” points out Sanjay.

When asked about what his future holds for him, Sanjay says, “Conservation is a lifelong journey and I hope to walk along that path as long as my legs take me.”
In particular, Sanjay wishes to see a network of protected areas across the Western Ghats in Karnataka all interconnected. That would mean one could get into the Bannerghatta National Park near Bangalore and walk out of Bhimghad Wildlife Sanctuary, which borders Maharashtra and Goa. “This will give a vast area for tigers, elephants, hornbills and dholes; moreover, many other smaller species will also find a chance for long-term survival. It will also help water flow in our rivers and streams, and I am sure it will give people a better place to live.”