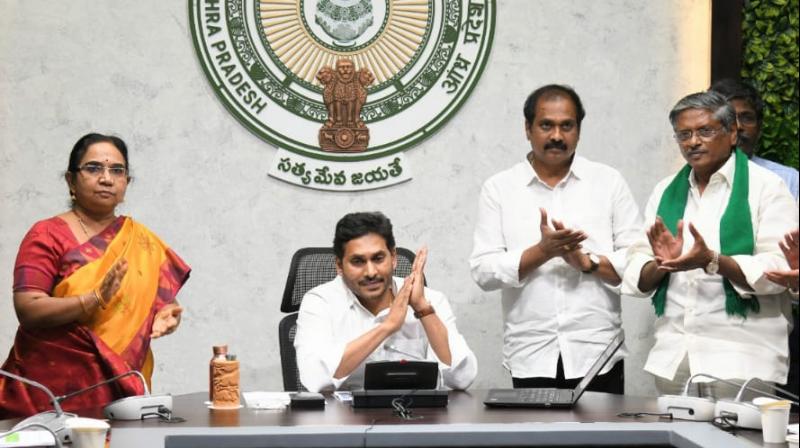 VIJAYAWADA: Chief Minister Y. S. Jagan Mohan Reddy has directed authorities to fill up all vacant posts of veterinary doctors in Andhra Pradesh.
Reviewing with ministers and senior officials working of animal husbandry, dairy development and fisheries departments at his camp office on Monday, the CM said veterinary doctors are essential for extending services as per schedule at the Rytu Bharosa Kendras (RBKs). He directed officials to provide quality fodder and medicines at RBK kiosks.

Jagan Mohan Reddy asked officials to fix Information Network for Animal Productivity and Health tags on cattle being offered to farmers under the YSR Cheyutha programme. He instructed collectors to clear insurance claims every three months and directed the release of Rs. 98 crore dues for the purpose immediately.

The Chief Minister gave a green signal for filling up 6,099 vacant posts of animal husbandry assistants in the state. He directed officials to make ready buildings for accommodating YSR integrated veterinary labs by June 1, 2021. He permitted the authorities to fill up new posts of 21 lab technicians and 21 lab assistants. He asked officials to ensure one call centre with one number for veterinary, agriculture and horticulture.

A proposal to launch a mobile veterinary ambulance service for livestock, similar to 108 ambulances, was discussed. Such a facility is already available in Tamil Nadu. Officials informed the CM that a similar ambulance will help move sick animals from villages to veterinary hospitals for treatment.

The CM also reviewed the Amul Pala Velluva programme to be launched in the Guntur district next week and in West Godavari from April onwards. He further instructed officials to fill up posts of village fisheries assistants and asked officials to lay stress on promoting cage culture in water bodies.

Jagan Mohan Reddy directed officials to take up works related to fishing harbours at Juvvaladinne, Uppada, Nizampatnam and Machilipatnam under Phase-1 and at Budagatlapalem, Kothapatnam, Biyyaputippa, Pudimadaka and Manchineellapeta in Phase-2.

Employees, teachers given 30 per cent hike in basic salary in Telangana