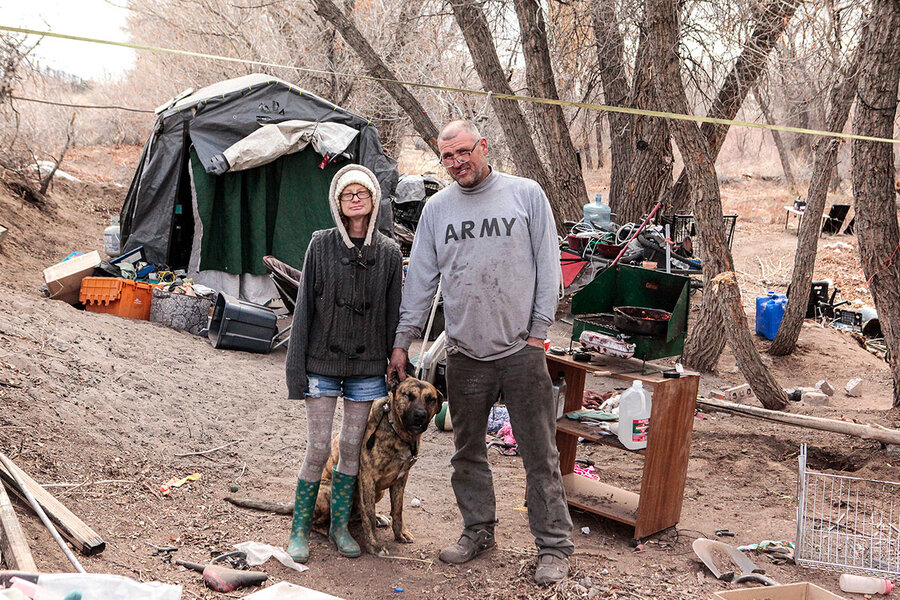 Last winter, Ricky Plunkett and Christi Buchanan woke up to find their tent completely frozen inside.

The couple, who are homeless, were camping near the Rio Grande on the outskirts of Alamosa. The temperature had plunged to -26 F, and they could hear the fabric of their shelter crackle as it froze.

“We woke up, and on the inside of the tent, it looked like someone just sprayed glass,” Mr. Plunkett says.

Changing attitudes is critical to solving complex problems, like homelessness. As hard as that can be, Alamosa, Colorado, is seeing some progress – among officials, at least.

They’re from Texas – a warmer climate. But the duo takes pride in weathering sub-zero winters on the floor of North America’s largest high-altitude desert, the San Luis Valley, high in the Rocky Mountains. Alamosa is the biggest community in the vast, remote valley, with about 10,000 residents.

Despite the brutal cold, the couple trekked to Alamosa two years ago to live in a temporary homeless shelter. They’ve since settled into a life spent mostly in a secluded spot near the Rio Grande that’s popular with other homeless campers. Both say they’re stuck in bureaucratic red tape trying to get IDs required for public housing.

Mr. Plunkett and Ms. Buchanan are a chipper couple who mostly want to be left alone. But this month, they found themselves at the center of Alamosa’s reckoning with homelessness.

Amid a national surge in homelessness during the pandemic, many towns in the Rocky Mountain region have faced their own crunch: Shelters have had to limit capacity at the same time as more people have become homeless. The result has been a spread of street encampments, stirring unease and anger among some residents.

“COVID has really opened people’s eyes that the status quo is not working,” says Kathleen Van Voorhis, director of housing justice at the Interfaith Alliance of Colorado.

On a recent Friday, more than two dozen local officials picked their way through the cottonwoods around the area where Mr. Plunkett, Ms. Buchanan, and others have been living. Alamosa County Sheriff Robert Jackson, county commissioners, the county public health director, and the local chief of police wanted to see the camps for themselves – and see how they’ll move the campers off the land, which is owned by ConocoPhillips and other companies.

County officials weren’t the only outsiders present. Staff from the local homeless services organization, La Puente (“The Bridge” in Spanish), sat with the couple to calm them during the unnerving experience.

Opinions ranged widely. County Administrator Gigi Dennis said the camps and surrounding refuse were “pretty shameful and disgusting.” Shanae Diaz, La Puente’s street outreach director and volunteer coordinator, wondered where the people would go if the county pushed them out.

Despite the differing perspectives, the scene reflected the start of an important shift in Alamosa’s approach to its housing and homelessness crises. After years of historically thorny relations – or outright silence – between county officials and social service providers, they’re starting to work together.

So far, much of the energy has focused on overcoming long-simmering resentments about unsheltered people and the network that serves them.

Residents say they’ve long noticed more homeless people like Mr. Plunkett and Ms. Buchanan arriving in town. They search for sustenance or a bed at La Puente’s transitional shelter and occasionally cause trouble. Some residents themselves fall into homelessness because of the town’s slim housing stock or due to mental health struggles, addiction, poverty, and more.

But Ms. Brooks is quick to note that 85% of La Puente’s clients come from within the San Luis Valley, which is about the size of Connecticut. She’s trying to push that message out to property owners who are hostile to La Puente and the people they serve.

Kent Ruark summed up the feeling on his daily walk with his dog Rodney. He has sympathy for local homeless people, although many other Alamosans think the average La Puente client is “a thief” or just worthless, he says.

“But you’re just a human who’s down on their luck,” Mr. Ruark believes.

La Puente typically accepts between 600 and 800 people into its transitional shelter each year. Suddenly last spring, with COVID-19 capacity restrictions, only 30 people could stay in the shelter at one time.

Homeless people quickly erected more illegal encampments than ever in the residential neighborhoods around town. By May, some property owners were furious.

Driven by a more ambitious perspective at City Hall, Ms. Brooks and the City Council proposed a plan: a “sanctioned” campsite for homeless residents with some amenities, including port-a-potties, Wi-Fi, and a water spigot. It’s a popular option in communities from Las Cruces, New Mexico, to Portland, Oregon.

When the City Council allowed the public to comment on the plan, dozens of residents phoned into a virtual meeting in early May.

“I feel like this homeless population is taking over our city,” Alamosa resident Karrie Kooiman said. One caller, Roberta Taylor-Hill, said “murderers” and “rapists” might be among the people living in the sanctioned camp.

After the meeting, the city established the encampment on a brush-filled parcel far away from any residences – and from La Puente’s popular grab-and-go meals.

Winter returned to the valley, and most homeless people fled the frigid weather. But not Chris Sandoval and Eileen Sandoval.

Earlier in the year, when the pandemic hit, the couple had been homeless in Colorado Springs, the state’s second-largest city. They trekked to Alamosa, where Chris was born, after a homeless shelter required that they live separately because they’re not legally married yet.

Ten months after the sanctioned camp opened, they’re the last of its residents, their campsite tucked into the deepest corner of the dusty site. They give the place mixed reviews. It’s a long walk across town to the Safeway where they panhandle. And arguments there were common, as were fires.

Ms. Diaz, La Puente’s street outreach chief, has built deep rapport with many chronically homeless Alamosans. She said one man detested a bully in the camp and torched his tent before leaving town. Eileen said she heard screaming in the night this winter and then the woosh of two other tents bursting into flames, although no one was burned.

The couple says they’ve been unable to get into the shelter at La Puente, which, a year after COVID-19 appeared, is still at its capacity under the virus restrictions. Although those may ease during the vaccine rollout, Alamosa usually sees an uptick in homeless residents during the spring and summer, so it’s likely that shelter beds will soon be in even higher demand.

And as the weather warms, La Puente staff expect more homeless people to return to illegal camps like the one where Mr. Plunkett and Ms. Buchanan live. It’s unclear whether county officials will move to break up these informal sites. If so, that could create another crisis, Ms. Diaz says.

Friends, family, and a future

City officials and La Puente staff are in talks about investing in the sanctioned campsite to make it more attractive. On the table: a full-time social worker living at the site to help with grievances and perhaps some permanent “tiny homes” designed by a local artist.

But that would be costly, and in Alamosa scarce resources guide every plan.

“When you have high poverty … [it] begets hunger, homelessness, and other crises that destabilize families. And then that same poverty strangles you from the resources that would naturally be available to fight that,” says Lance Cheslock, La Puente’s executive director.

Not only are homelessness and hunger far from resolved in Alamosa and other communities in the region, but it’s unclear whether the more humane perspective now championed by some local officials has spread among regular Alamosans. Ms. Brooks, the city manager, says community attitudes probably haven’t changed that much.

Chris would agree. He was panhandling at the Safeway about a month ago when three men jumped out of a car and beat him up, he says. Ms. Diaz says he was beaten so badly that he couldn’t walk.

He has since started work at a local Taco Bell, eager to save money for a place for himself and Eileen. The couple has no plans to leave Alamosa.

Both are from the San Luis Valley. It’s where they have friends and family and a future together.