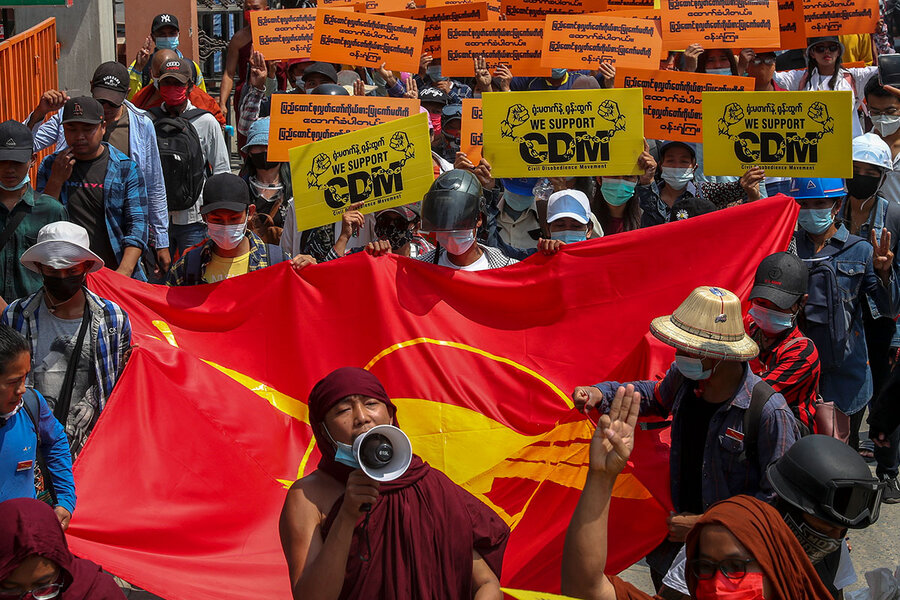 Peter, a young father, looked out at the sea of tens of thousands of peaceful protesters surrounding him in a sit-in at a market in his hometown of Mandalay, their bright red and yellow posters condemning the Feb. 1 military coup in Myanmar.

Moments later, security forces assaulted the crowd, firing tear gas and live rounds. “They arrived as early as possible and start brutally cracking down, shooting, beating, even firing on the street,” says Peter, using a pseudonym for his protection. “A few of our friends died, and a lot were arrested.”

Peter is Muslim. The friends he lost in the protest earlier this month were Buddhist. Despite Myanmar’s long history of discrimination and violence against Muslims by the Buddhist majority – tensions and fears the military junta seeks to exploit – today on Myanmar’s streets people are showing a powerful solidarity, activists say.

Religion has long been a divider in Myanmar – most tragically, in the persecution of the Rohingya. But the urgency of opposing a military coup has brought activists from different faiths together, protesters say.

After the coup, different religious groups “are more unified than ever,” Peter says, speaking by phone from Mandalay.

In diverse and deeply pious Myanmar, protests by religious groups have deep resonance in challenging the legitimacy of those who hold power. Today’s cooperation among different faiths in backing a broader, youth-led protest movement against the junta reflects a decade of efforts at interfaith peace building since the country’s opening to semi-democratic, civilian rule, experts say.

It has been challenging work in a country suffering devastating interreligious conflict, including a military campaign of killing, arson, and rape against Myanmar’s Muslim Rohingya ethnic minority that since 2017 has forced more than 730,000 Rohingya to flee into Bangladesh.

That crisis was fueled, in part, by Buddhist nationalists. Now, activists worry that the military will try to provoke further religious conflict to win support from the majority Bamar ethnic people, who practice Buddhism.

“Myanmar is a country with so many complexities and so much history of identity politics,” says Aye, a Christian activist in Yangon, who for protection asked to use a pseudonym and the gender-neutral pronoun “they.” “It’s so easy to say this Muslim person has raped this Buddhist woman or something that triggers mob violence. [The military has] done that really, really well over the years,” they add.

New networks involving Buddhists, Muslims, Christians, and other faithful are pooling resources and coordinating support for the protests in different parts of the country, Aye says. “They have the confidence to say democracy is for all of us.”

“The military miscalculated the strength and the groundwork that had already been laid, and didn’t think the people would be confident enough to come out against them so strongly,” Aye says by phone from Yangon, where they are active in protests.

Myanmar’s strong culture of giving – it is the second-most charitable country in the world after the United States – has seen an outpouring of donations to support informal health clinics and local markets, as the civil disobedience movement halts public services and businesses.

Christians are playing a bigger role than in past protests, says David Moe, a Ph.D. candidate at Asbury Theological Seminary, who grew up in Myanmar’s majority-Christian Chin state. “The coup is clearly unjust for the majority of Christian groups, even though in the beginning of the movement some people were hesitant,” he says. The Burmese Christian refugee community in the United States is actively raising funds to help support striking government employees, he says.

For its part, the military junta is working to sow divisions within the protest movement, Peter says, such as by claiming the National League for Democracy, the political party of civilian leader Aung San Suu Kyi that won a landslide election victory in November, was funded by overseas Muslim groups to promote Islam in Myanmar. Soon after the coup, the military raided the Muslim quarter of Mandalay, claiming to be hunting terrorists, he adds.

But such timeworn scapegoating tactics are proving ineffective, Peter believes. “People are more united, and they see the coup as the main problem,” he says.

Religious unity is particularly threatening to the generals who led the coup, because of the historically symbiotic relationship in Myanmar between Buddhism and the state.

“The health of each is thought to be dependent on the other,” says Susan Hayward, an expert in peace building and Myanmar at Harvard Divinity School. “So the state provides for the monastic community’s health and well-being, provides economic resources, helps to … oversee conflicts within the sangha [community of monks], and in return, the sangha provides forms of moral legitimacy, spiritual power, and religious legitimacy to the state.”

Some monks, especially in the older generation, side with the military. “They really believe they are the protectors of the country,” says Somboon Chungprampree, a Thai social activist and executive secretary of the International Network of Engaged Buddhists in Bangkok.

But the coup has undermined the military’s effort to cast itself as the guardian of the nation and Buddhism, especially as the public grows weary of strident nationalism and religious discrimination and identity politics.

“Today when we say … this person is a nationalist, it’s much more negative than positive,” says Aye.

In a potentially ominous development for the military, Myanmar’s influential, state-appointed Buddhist monks’ association, the State Sangha Maha Nayaka Committee, last week called on the military to halt its violence against the protesters, foreshadowing a possible break with the regime, according to a leaked document reported by the online news outlet Myanmar Now.

“That’s huge actually, because the Maha Nayaka … has tended historically to be very conservative and not issue statements or take actions that are oppositional to the state,” says Ms. Hayward. For example, it did not support the 2007 Saffron Revolution led by Buddhist monks.

If this powerful Buddhist association “is considering participating in the civil disobedience movement and breaks with the state military, that would be a historical anomaly,” she says. “It would send a very strong moral message to the military that has tried very hard to present itself as having Buddhist legitimacy.”

Protesting monks have drawn on religious symbolism to spiritually exile the military, turning over their alms bowls to signal they cannot accrue good karma by making donations, and that the monks will no longer perform Buddhist rites for them.

Mandalar, a Buddhist monk in Mandalay, exemplifies the younger generation of monks who are wholeheartedly backing the protesters against the coup.

Depending on the day, Mandalar may be helping to carry injured protesters to makeshift hospitals in monasteries, or seeking donations to pay for medicine, food, and water.

“Even last night, they were shooting machine guns and killed and injured many people,” he says on a call from Mandalay. “We have martial law. If you go outside, they will shoot. It’s a bad situation.”

Activists in Myanmar report that more than 300 people have been killed by the government since the Feb. 1 coup and nearly 3,000 have been arrested.

For Mandalar, his Buddhist faith and his activism complement each other – reflecting the strong connection in Myanmar between religion and community.

“When the people are suffering, how could we live in a peaceful way?” he asks, his voice rising with emotion. “We have to help the people get their rights and freedom. We don’t want to live in fear and danger. We are also part of the country and the family. If we deny the situation and don’t [get] involved, it’s a shame.

“No one should live under threat, in danger, in fear,” he says. “Not now, and not in the future!”