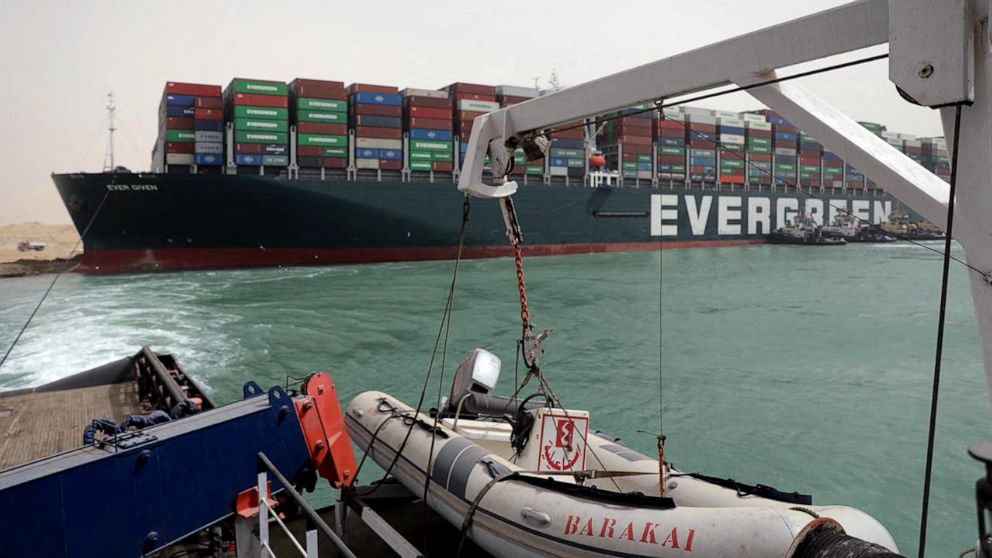 A quick end to traffic disruption in Egypt’s Suez Canal was unlikely Thursday, with efforts to pull a stranded, massive ship yielding little progress and the head of a newly hired rescue team saying it can take “days to weeks” to re-float the vessel.

Ever Given, a 224,000-ton ship registered in Panama that is 400 meters long and 59 meters wide, has been stranded since Tuesday morning after running aground due to a “dust storm” and bad weather conditions, according to Egyptian officials.

Eight tugboats, including one that’s 160 tons, have relentlessly tried to pull the ship with little success. Peter Berdowski, the chairman of a Dutch firm hired by Egypt to clear navigation in the vital waterway, said the strategy was ineffective.

“It is, in a manner of speaking, a very heavy whale on the beach,” Berdowski told Dutch program Nieuwuur on Wednesday. “The ship, with the weight it now has, can’t really be pulled free. You can forget it.”

Berdowski said another strategy would be removing water and oil from the ship to reduce weight and, possibly, offload containers. He admitted, however, it could take weeks to complete the task.

Egypt said it halted all navigation in the canal on Thursday, having briefly allowed 13 vessels in Port Said to move southwards on Wednesday only after realizing that rescue efforts were taking longer than initially estimated.

The Suez Canal Authority said in a statement: “The 13 vessels were expected to continue their transit through the canal according to projections on the time of completion of the floatation works of the grounding vessel. However, an alternative scenario had to be adopted; which entailed those vessels dropping anchor in the Bitter Lakes waiting area, until navigation can be fully resumed after the floatation of the vessel.”

The ship’s Japanese owner, Shoei Kisen Kaisha Ltd, said it apologizes “for causing a great deal of concern to the vessels scheduled to sail … and all parties affected by this accident. We are determined to keep on working hard to resolve this situation as soon as possible.”

Tracking maps showed more than 100 ships standing idle south of the stranded ship, blocking a strategic waterway that provides the shortest sea link from Asia to Europe by connecting the Mediterranean to the Red Sea.

Last year, 18,829 vessels passed through the canal in both directions.