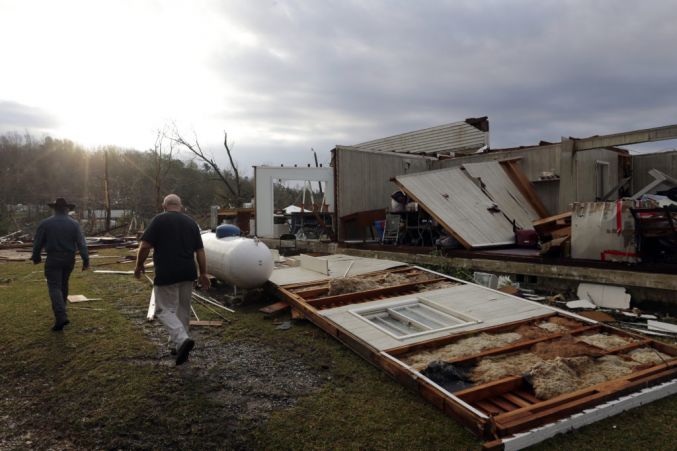 The tornado outbreak rolled into western Georgia early on Friday, and meteorologists said one large, dangerous tornado moved through Newnan and surrounding communities in the Atlanta metro area.

A day earlier, a sheriff in eastern Alabama said a tornado cut a diagonal line through his county, striking mostly rural areas.

“Five people lost their lives and for those families, it will never be the same,” Calhoun County Sheriff Matthew Wade said.

As many as eight tornadoes might have hit Alabama on Thursday, said John De Block, a meteorologist with the National Weather Service in Birmingham. Multiple twisters sprang from a “super cell” of storms that later moved into Georgia, he said.

Reports of tornado damage in the Newnan area began coming in shortly after midnight. Trees were toppled and power lines downed, knocking out service by the local utility.

“It’s still dark so it’s hard to assess all of the damage but we believe we have 30 broken poles,” Newnan Utilities general manager Dennis McEntire said. “We serve about 10,000 customers and about half are without electricity right now.”

Newnan police urged the public in a Facebook post to “get off the roads” while emergency officials surveyed the damage.

The bad weather stretched across the southern US, raising concerns of thunderstorms and flooding in parts of Tennessee, Kentucky and the Carolinas.

In Ohio, more than 100,000 people were without power early on Friday after thunderstorms delivered 50mph wind gusts to parts of the state. Forecasters reported peak gusts of 63mph in Marysville.

Some school districts from Alabama to Ohio cancelled or delayed class on Friday due to damage and power outages.

Authorities said one tornado carved up the ground for more than an hour on Thursday, travelling roughly 100 miles across Alabama. Vast areas of Shelby County near Birmingham — the state’s biggest city — were badly damaged.

Mike Oakley, mayor of Centreville, Alabama, told ABC 33/40 news that a local airport was hit. “We have airplanes torn apart like toys. We’ve got homes along here that are totally destroyed, trees down, power lines down. It’s pretty devastating.”

First lady Jill Biden postponed a trip to Birmingham and Jasper, Alabama, planned for Friday because of the severe weather, her office said.

“Thinking of everyone in Alabama and all of those impacted by the severe weather across the South tonight. My prayers are with the grieving families. Please stay safe,” she tweeted.

Alabama governor Kay Ivey had earlier issued an emergency declaration for 46 counties, and officials opened shelters in and around Birmingham.