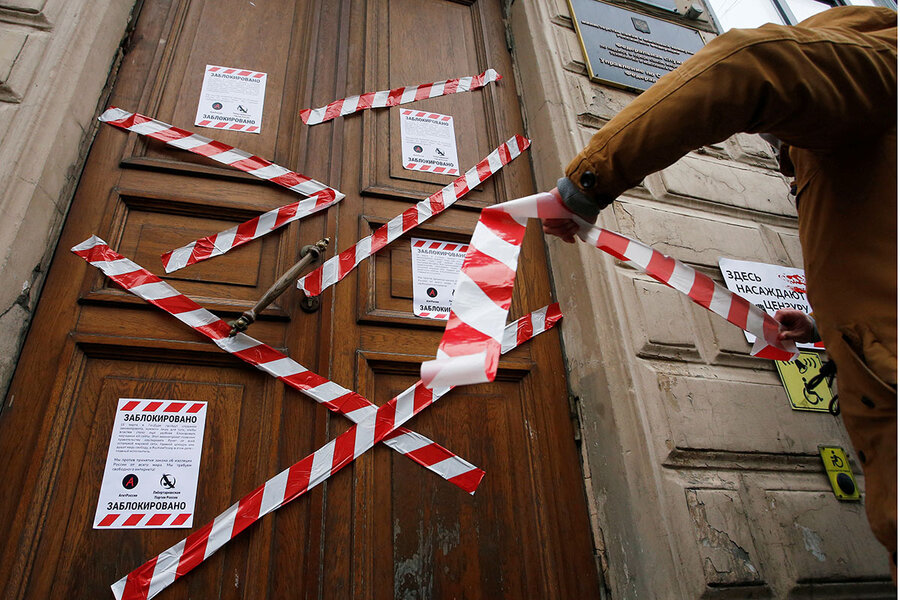 Russian communications watchdog Roskomnadzor is threatening to shut down the Russia operations of internet giant Twitter next month, in what is widely seen as an opening gambit to impose domestic content controls on foreign-based social media platforms.

Indeed, Twitter’s recent crackdown on U.S.-focused accounts – including that of former President Donald Trump, who was banned for inciting violence around the Jan. 6 riots at the U.S. Capitol – may have emboldened Russian authorities to demand the global microblogging service take similar action against content deemed illegal or disruptive in Russia.

When a society has been integrated with the rest of the world, even if not always comfortably, it is often unrealistic if not impossible to sever that connection.

But Moscow appears to have a broader design, outlined in a recent “sovereign internet” law, that would enable Russian authorities to completely disconnect the Russian digital space from the global internet, or to pick and choose which information streams are allowed in. Russian authorities deny that is the intention, except in an emergency. Nonetheless, a recent exercise that saw Roskomnadzor impose a 10% slowdown on Twitter’s domestic traffic over its refusal to remove about 3,000 posts that were deemed offensive, suggests that they may be working toward such a goal.

Experts say that Russia lacks the technological might and market clout that has enabled China to construct a “Great Firewall” to filter out undesirable content at will. An attempt by Roskomnadzor two years ago to shut down the messaging app Telegram for refusing to share its encryption keys with security forces ended in humiliating defeat. Today, Telegram is the most widely used messaging service in Russia, openly employed by Kremlin officials, state media, and opposition leaders alike.

More seriously, Russia is a country in which 80% of the population are now regular internet users, and they increasingly depend upon it for their educational endeavors, commercial needs, and news consumption, as well as social networking activities. Roskomnadzor’s recent internet muscle-flexing not only slowed down Twitter, but caused massive collateral damage domestically, including slowing down the Kremlin’s own website and those of leading Russian internet companies. The idea of creating a self-sufficient Russian cyberspace free of foreign influences might appeal to Russian nationalists, but would likely alienate millions of people who’ve grown used to unfettered access to the worldwide net.

“Russia is very much a country of the net, especially the younger generation,” says Mikhail Chernysh, an expert with the Institute of Sociology at the Russian Academy of Sciences in Moscow. “The idea of a sovereign internet is mostly defensive; in case the outside world cuts Russia off, we could keep functioning. So much these days, including the financial system, trade, and almost every form of exchange, depends on digital links. Russia has more to lose by cutting those connections than it could possibly gain.”

“It’s about controlling the media feeds”

Severing Russia from the internet would also crush the ambitions of the country’s growing IT sector, whose big champions like Yandex – often called Russia’s Google – and the Facebook-like V’Kontakte have big plans to expand around the world. In the world of Russian social media, foreign platforms like Facebook and Twitter do not have much market penetration, although they do tend to attract the most educated and opposition-minded part of the population.

“The Russian government has started with Russian companies, like Yandex, V’Kontakte, Odnoklassniki, and forced them to accept some content rules,” says Alexander Isavnin, a professor at Free Moscow University, an alternative university devoted to academic freedom. “These companies now cooperate and filter content as they are told. Russian authorities want to compel foreign platforms to behave the same way in the Russian market. Mostly they want to be able to prevent opposition leaders like Alexei Navalny from being able to instantly spread their messages.

“While only about 3% of Russians use Twitter, opposition leaders use it a lot and consider it to be the last bastion of free speech,” he says. “It’s about controlling the media feeds to people, not about protecting the internet and keeping it sovereign.”

Vladimir Putin recently slammed the influx of malignant content from outside the country, referencing messages that glorify drug use, suicide, and child pornography. “We all unfortunately know what the internet is and how it’s used to spread entirely unacceptable content,” he said, arguing that it should be governed by “moral laws.”

But experts say most of Roskomnadzor’s demands on Twitter relate to the opposition’s use of the platform during the recent spate of street demonstrations in support of Mr. Navalny, and particularly appeal to minors to take part in the protests.

Since Roskomnadzor’s failure to ban Telegram, new legislation has compelled Russian servers to install special equipment, known as deep packet inspection, that enables special services to monitor content, and to block or re-route traffic as needed.

Andrei Soldatov, author of “The Red Web,” a history of the Russian internet, says the main purpose of the sovereign internet laws is to control the domestic digital space, and possibly black out regions of the country if trouble breaks out.

“Russian authorities understand that the most explosive content is generated inside the country, not outside,” he says. “And it’s not necessarily things posted by opposition activists that pose the challenge. Nowadays, if an event happens in some region like, say, mass protests, there will be huge numbers of ordinary witnesses posting content about it directly to the web. The architecture that is now in place will enable authorities to isolate that region from the rest of the Russian internet to slow the spread of such information.

“It’s not about cutting cables anymore,” says Mr. Soldatov. “The goals are much more subtle.”

One solution to the global spread of misinformation and malicious content might be an international body that sets standards and enforces compliance across platforms, says Andrey Yablonskikh, a partner at the International Academy of Digital Communications in Moscow.

“At the moment there is no concept of global regulation of social networks,” he says. “Each country has its own laws and norms, which are different from everywhere else. So now we see these efforts to block networks or accounts on a piecemeal basis, and it’s often controversial. Until there is a global body to regulate this, social networks are going to keep experiencing these difficulties.”

In any case, Roskomnadzor’s efforts to intimidate Twitter are probably doomed to fail, say experts.

“Twitter isn’t very important in Russia, but if Roskomnadzor wants to move against other platforms, like YouTube, TikTok, or Facebook, there will be serious consequences,” says Sarkis Darbinyan, a lawyer and co-founder of Roskomsvoboda, a group that works for internet freedom.

“Russia is deeply integrated into internet commerce, and the largest Russian corporations depend on these networks for advertising,” he says. “And the social impact would be devastating. It might result in a further radicalization of Russian society, because even politically neutral people will be incensed by such measures. Russians are not ready to give up their favorite internet services.”