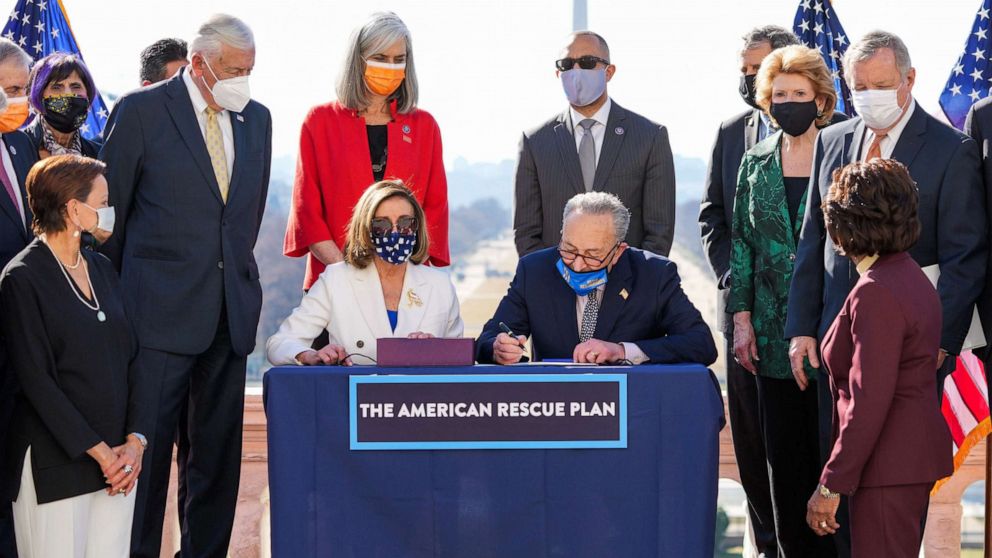 A sampling of the congressional agenda these days reads like something out of progressive dreams: A wealth tax, trillions in new infrastructure spending with climate-change protections built in, expanding background checks for gun purchases, abolishing the filibuster, statehood for the District of Columbia, and even the possibility of overturning a House election in Iowa where a Republican was certified as the winner by six votes.

Democrats, in full control of Washington for the first time in more than a decade, could conceivably do all of those things in the months to come.

There’s a decent chance they’ll accomplish none of them. While they can blame Republican obstructionism, they’ll also have to save some of the blame for themselves.

It’s not just that Democrats have the narrowest of majorities in the Senate and virtually no wiggle room in the House. It’s that, having won the majority, some Democrats are wary about what they do with it — and how best to keep it.

That explains part of the situation on the Senate filibuster, which is probably the single biggest impediment to the agenda of the Biden White House and its progressive allies. Over in the House, meanwhile, rank-and-file Democrats are warning about the consequences of the House voting to overturn an election that was certified by state officials.

“Just because a majority can, does not mean a majority should,” Rep. Dean Phillips, D-Minn., tweeted Monday.

The White House was able to count on party unity to carry its first big legislative item forward. But as plans round out for what comes next, concerns are growing about what such unity might cost them from here.

A visit from the commander-in-chief can spur legislative action and bring the attention of the nation to a specific issue or place. A presidential visit indicates that addressing a dire situation is a priority of the administration.

That’s why reporters have asked both President Joe Biden and Vice President Kamala Harris when they’ll travel to the southern border to personally view the conditions inside facilities holding unaccompanied minors seeking asylum.

Asked Monday in Jacksonville, Florida, when she’d make the trip, Harris said, “I have before and I’m sure I will again.” Biden similarly told reporters Sunday he’d visit “at some point.”

The non-committal answers come as White House officials still refuse to describe the situation at the border as a crisis, a term that lawmakers on both sides of the aisle have deemed appropriate.

While the administration has enlisted the assistance of the Federal Emergency Management Agency and Health and Human Services, Biden administration officials have faced fierce blowback over conditions at border facilities and the length of time children are being kept there.

Biden himself should expect to take more heat on the issue as he prepares to face White House reporters for the first time in a press conference Thursday and as a group of Democratic lawmakers tour an HHS facility in Texas. He’ll be expected to clear up the administration’s muddled messaging and provide a forward-looking solution.

“I think now the people of Missouri need a fighter in the United States Senate and they need somebody who’s going to go — as I will, as I am committed to do, to defending President Trump’s America first policies,” Greitens said in an interview on Fox News. Greitens’ enthusiasm for the political battle ahead comes with significant baggage — in 2018, he resigned amid allegations of sexual misconduct and blackmail.

Meanwhile, at a rally in Huntsville, Alabama, Brooks invoked past Trump endorsements before a cheering crowd. “How many times have you been burned by candidates who masquerade as conservatives while campaigning, yet govern as squishy RINOS when they govern,” Brooks, who was also joined by former Trump adviser, Stephen Miller, asked supporters. The congressman is now set to challenge another one of the former president’s supporters — former Trump-appointed ambassador to Slovenia, Lynda Blanchard.

Although the midterm elections are still more than a year away, Monday’s announcements signaled a tangible shift to the right in the current 2022 political landscape, while also resurfacing the need for Republicans to figure out how to balance the former president’s political legacy with the continuing “big lie” of election fraud that seems to be bleeding into the next campaign cycle.

ABC News’ “Start Here” podcast. Tuesday morning’s episode features ABC News’ Kayna Whitworth, who brings us the latest on a mass shooting at a Boulder, Colorado, supermarket. ABC News’ Anne Flaherty and Sony Salzman — the two break down the latest U.S. trial data from the Oxford/AstraZeneca vaccine and expanded eligibility in many states. ABC News’ Marcus Moore joins us from southern Mexico, where migrants from Central America are coming in large numbers as they journey to the U.S. http://apple.co/2HPocUL

ABC News’ “In Plain Sight” podcast. Riots, uprisings and protests rock the country in the summer of 1966 and despite their progress with civil rights legislation, the Johnsons can’t seem to move fast enough. And an increasingly unpopular war in Vietnam begins to overshadow just about everything else. Luci Johnson’s wedding in Washington, D.C., becomes the setting of dramatic anti-war protests, and Lady Bird herself is the target of a bomb threat. Feeling the urgency, Lady Bird is looking for ways to make beautification have more impact for the people who need it most. And she finds inspiration and an unlikely collaborator in San Francisco. But just as their most ambitious, controversial project is about to get underway, tragedy strikes. https://abcaudio.com/podcasts/in-plain-sight/

FiveThirtyEight’s Politics Podcast. Over the weekend protests against anti-Asian violence took place across the country in response to the killing of eight people — six of whom were women of Asian descent — in three spas around Atlanta. The protests also addressed the broader context of anti-Asian rhetoric and violence, which has increased since the start of the COVID-19 pandemic. In this installment of the FiveThirtyEight Politics podcast, the crew speaks with professors Jane Junn and Karthick Ramakrishnan about the attacks and how political participation among Asian Americans has evolved in recent decades. https://53eig.ht/2PflHQ6

Army turns to its youngest members to address cultural issues