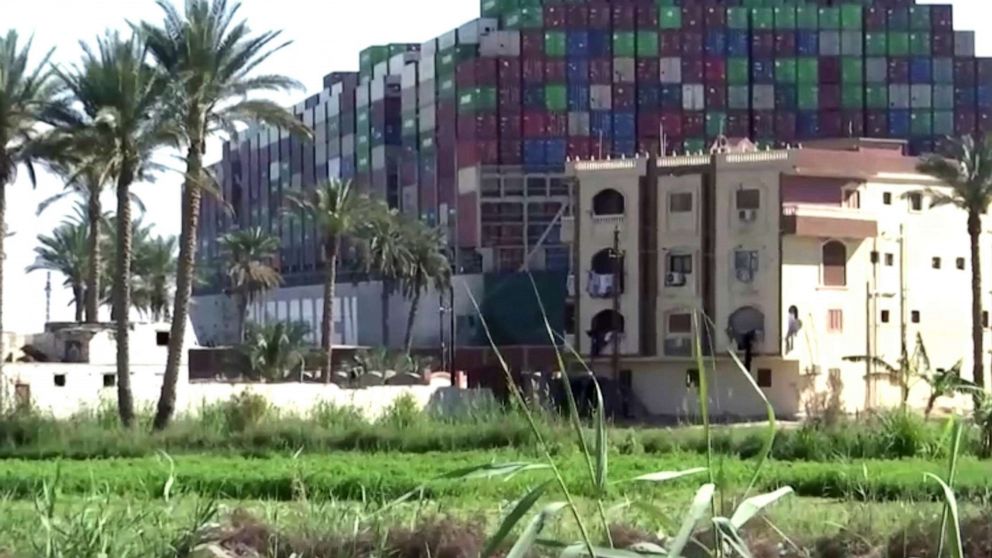 The blockage of the Suez Canal by a ship the size of the Empire State Building has stoked economic anxieties around the globe, that only escalate each day the critical maritime trade route remains closed.

Shipping industry journal Lloyd’s List estimated that the blockage is impeding approximately $9.6 billion per day worth of goods in container cargo alone. As containerized cargo accounts for just 26% of total traffic through the canal, the outlet estimates that the actual total value of goods being held up is likely much higher.

Ever Given, a 224,000-ton container ship registered in Panama, ran aground in the Suez Canal on Tuesday morning as it was en route from China to the Netherlands. As of Friday, hundreds of ships are now waiting to enter the canal from both sides. It’s unclear how long it might take to free the Ever Given.

About 12% of global trade passes through the Suez Canal, which connects the Mediterranean Sea to the Red Sea and creates the shortest maritime link for goods traveling from Asia to Europe. The impasse comes as an estimated 90% of global trade is transported by sea, according to the Organization for Economic Co-operation and Development.

As the blockage drags on for days, some are ringing alarm bells over how this could impact the economy and its increasingly connected global supply chains. The U.S. on Friday stepped in to offer assistance to Egyptian authorities in freeing the behemoth ship.

“I am aware of the implications of the temporary closure of the canal, and I ask for patience from stakeholders across the supply chain as everyone works to ensure that the ship, its crew, its cargo and the environment remain protected,” Kitack Lim, the secretary-general of the International Maritime Organization, said in a statement Friday.

Will this impact oil prices?

Approximately 1.9 million barrels of oil are routed through the Suez Canal each day, according to Lloyd’s.

White House press secretary Jen Psaki told reporters Friday that the U.S. could “see some potential impacts on energy markets from the role of the Suez Canal as a key bidirectional transit route for oil.”

She said the administration is watching market conditions closely and will “respond appropriately if necessary.”

Patrick De Haan, the head of petroleum analysis at Gasbuddy, told ABC News that the blockage so far is having a somewhat volatile role on oil prices.

“Yesterday oil cratered, and today it’s back to where it was before yesterday,” he told ABC News via email on Friday. “If the Suez Canal remains blocked for more than a few more days or over a week, we could likely see some disruptions in oil flows between the Middle East and Europe that could impact price globally, but it should not hamper flows of oil to North America.”

At worst, De Haan said that if the issue continues and “oil prices do see a sustained rally, the blockage could have a small and limited impact on gas prices, likely no more than a few cents per gallon on average.”

Oil demand has notably receded amid the ongoing coronavirus pandemic.

Will this impact consumers?

The impact that the impasse has for consumers — and the economy as a whole — will largely depend on how long it lasts, according to Jon Gold, the National Retail Federation’s vice president of supply chain and customs policy.

“The hope is that consumers won’t be impacted at the end of the day,” he added.

In addition to oil, Gold noted that a myriad of other goods float through the canal every day — including apparel, footwear, accessories and home goods.

“Many companies are looking at their risk-mitigation strategies and determining what they can do to ensure that their supply chains aren’t disrupted too much,” he said. “I think carriers are going to start looking to divert away from the Suez, around Cape Horn, to deal with that.”

While rerouting ships around Africa instead of through the Suez Canal can be costly, Gold predicts that “more times than not the retailer is going to absorb those additional costs, as opposed to pass them along to the consumer.”

James Baker, the containers editor for Lloyd’s List, similarly told ABC News, “It’s too early to tell how this will affect the consumer, if at all.”

Baker noted that the majority of container ships passing through the canal are headed from Asia to Europe, though some do go on to the eastern coast of the U.S.

Baker predicts manufacturing in Europe will likely be most impacted at first, as components such as car parts come from Asia to be assembled in Europe. If the blockage wages on, however, other sectors could start feeling the pinch.

Ultimately, Gold said, “It’s too early to tell what the economic impact is going to be,” but warned that the potential fallout is “going to grow the longer that the disruption is there.”

The economic anxieties stoked by a ship blocking a canal in Egypt also “highlights how connected we are to the global supply chain,” Gold added, “and how important the global supply chain is, and why we need to make sure we actually have 21st century processes in place so that we can address some of these issues when they arise, and quickly deal with them.”