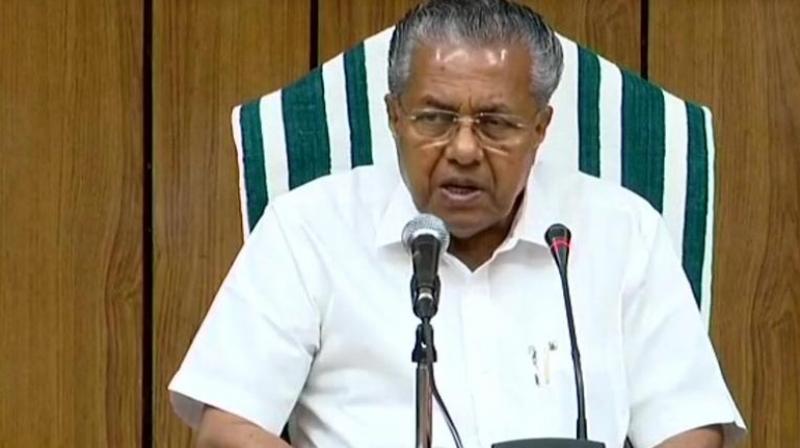 Thiruvalla: Kerala Chief Minister Pinarayi Vijayan on Wednesday strongly condemned the alleged harassment of a group of nuns by some Bajrang Dal activists in UP's Jhansi recently and urged the Centre to take action, saying such incidents tarnish the image of the nation.

In his letter to Union Home Minister Amit Shah, Vijayan sought strict action against those "who disrupt and impair the freedom of individual rights" guaranteed by the Constitution.

Citing reports, he said two postulants, who had recently joined a Christian congregation were travelling for the first time to their homes accompanied by two nuns and were "harassed and intimidated" by the Bajrang Dal activists.

The CM further said the nuns and the postulants were forcefully removed from the train by the police following a complaint from the Bajrang Dal members alleging that the two girls were being taken for forceful religious conversion.

"You would agree with me that such incidents tarnish the image of the nation and its ancient tradition of religious tolerance and practice."

Earlier, addressing the media in Pathanamthitta, Vijayan said the Constitution gives freedom to everyone in the country to believe and not to believe in any religion.

Everyone here has the right to live according to their faith, he added.

".. What happened yesterday was an encroachment on the freedom. Both these freedoms are fundamental rights of Indians. The nuns faced the violation of these rights during the train journey," he pointed out.

What happened in Uttar Pradesh should not have happened in the country and it is a "very serious matter."

Vijayan also attacked the ruling BJP in UP, saying the northern state is 'notorious' for such matters.

"Violence in the name of religion is on the rise in many parts of our country. Violence against women and marginalized groups are on the rise."

"Uttar Pradesh is notorious for such matters. All such illegal activities are taking place under the ruling BJP government there. It should also be taken seriously that all this is happening on an uncontrolled scale," Vijayan said.

He asserted that his government would not allow Kerala to become a breeding ground for communalism and secularism would be fully protected.

According to officials in Jhansi, the nuns were detained after local Bajrang Dal activists complained that two of the women were allegedly being taken forcibly for religious conversion.

The police said there was no basis in the complaint and all four women later took the next train to their destination in Odisha.

Expressing concern over the matter, Kerala Catholic Bishops Council had called for strong action against the culpritsinvolved in the incident.

The Congress and BJP had taken up the matter with Prime Minister Narendra Modi and Uttar Pradesh Chief Minister Yogi Adityanath, respectively.

Democrats confront limits of own powers: The Note