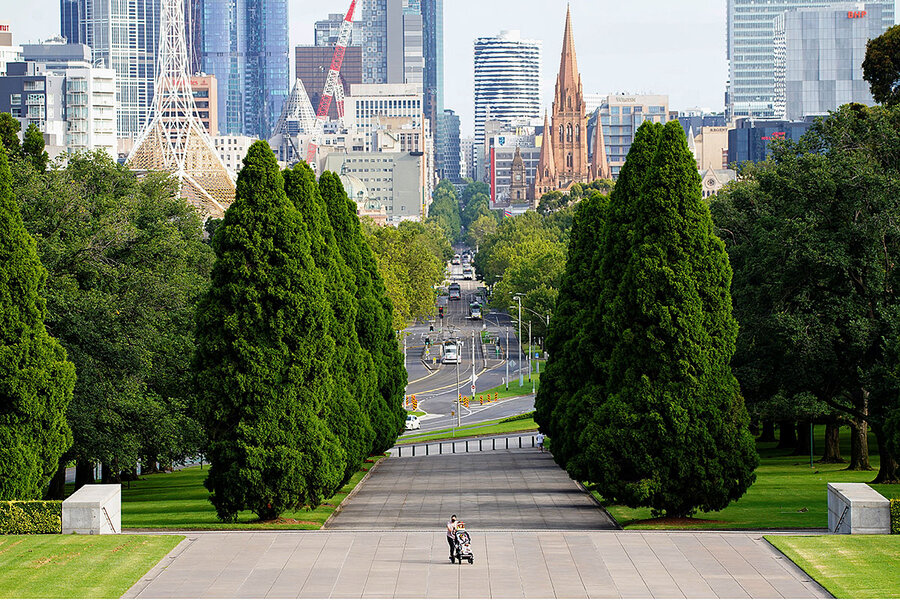 “During the time of the pandemic, obviously the state can take certain measures to restrict civil liberties, but it’s very important that those measures are necessary, lawful, and proportionate,” says Elaine Pearson, the Australia director at Human Rights Watch, based in Sydney. “It was neither necessary nor proportionate to arrest her in that fashion.”

From Australia to Zimbabwe, almost every nation in the world enacted restrictions during the pandemic. The wide spectrum of measures varied from country to country – and often within different jurisdictions within nations. Freedom of movement was hemmed in by various rules for curfews, travel, and public and private assembly. Some countries cracked down on speech and press freedoms. Others bypassed privacy in favor of track-and-trace measures and digital surveillance of those under quarantine.

For many citizens, sacrificing civil liberties was a necessary and worthwhile trade-off in the bid to “flatten the curve.” Now, civil libertarians are assessing the short-term and long-term ramifications of often unprecedented steps. At issue is whether governments bolstered a sense of partnership with their citizens or squandered trust. The balance between compulsion and cooperation may shape the response to future public emergencies.

“That tension is long-standing, liberty versus security. Are they complements or substitutes?” says Marcella Alsan, professor of public policy at Harvard Kennedy School, who studies public health and infectious diseases. “What’s interesting about the current situation, and particularly prior to the development of the vaccines – when all countries basically have the very same rudimentary toolkit of these NPIs, these nonpharmaceutical interventions – was basically, How willing were people to go along with these restrictions? What were they willing to sacrifice and what were they not willing to sacrifice?”

Ms. Alsan co-authored a November study that surveyed over 400,000 people across 15 nations about their attitudes toward civil liberties during the pandemic. More than 80% were agreeable to giving up some freedoms during a crisis. A closer look at the results, however, reveals gradations between citizens of different nations. Those surveyed in the United States and Japan were far less willing to relax privacy protections, sacrifice the freedom of press, and endure economic losses than those in China. Citizens in European countries occupied a middle ground between those two poles. Respondents in India, Singapore, and South Korea were more willing to suspend democratic procedures for the sake of public health.

According to Human Rights Watch, 83 governments restricted free speech and free assembly in the name of pandemic protections. Enforcement of those measures could be harsh. Youths in the Philippines were locked in dog cages following curfew violations, says Ms. Pearson. In India, police physically assaulted 10 journalists who reported that a COVID-19 roadblock in the southeast was preventing villagers from reuniting with their families. South Africa enforced a ban on cigarettes and alcohol by setting up roadblocks to search cars for contraband.

“Freedom House has been tracking a decline in [global] democracy for the past 15 consecutive years, and what we found is that COVID-19 has really exacerbated that decline,” says Amy Slipowitz, research manager for Freedom House, a U.S.-based nonprofit that tracks civil liberties worldwide.

However, some countries, including Sweden and South Korea, placed a high value on maintaining a fairly open society. Taiwan did so by forging a state-society collaboration. Prior to becoming one of the world’s freest democracies, the small island nation had been subject to martial law and single-party rule from 1947 until the late 1980s. That relatively recent experience colored the Taiwanese response to the pandemic. Taiwan’s Centers for Disease Control had legal authority to implement stringent measures, but it didn’t declare a state of emergency. Schools and stores remained open. In those instances when Taiwan did curtail liberties – including a track-and-trace program that included strict border controls – it employed a humane touch. Individuals placed under mandatory 14-day home quarantine received meal deliveries and trash disposal services. A hotline was set up for their mental health. And in response to concerns that those penned inside a digital fence could be watched by Big Brother long after the pandemic, the state promised to erase that cellphone data.

“The government recognized that, because the people’s freedom of movement is temporarily suspended, it is the responsibility of the government to take care of those individuals who had to be isolated for the sake of the public,” says Tsung-Ling Lee, an assistant professor of law at Taipei Medical University. “The government is seeking broad-based social support in that a lot of our measures that have to be implemented in the epidemic are relational.”

Taiwan’s government also favored persuasion over coercion. Case in point: its handling of one of the world’s three largest religious ceremonies, the Dajia Mazu Pilgrimage. Every April, tens of thousands join in a nine-day parade that originates at the Zhenlan temple and proceeds through a large swath of the island. Taiwan’s Centers for Disease Control has broad legal leeway to institute emergency measures such as prohibiting large public gatherings. Instead, the minister of health and welfare approached the temple’s chairman, a former opposition party member of the country’s legislature. The minister persuaded the temple to change its plans and delay the parade by several months. The temple went even further – it donated its parade budget to the Central Epidemic Command Center. In turn, the minister later appeared at a temple ceremony as a gesture of grateful appreciation to the worshippers.

“It’s better to foster a bottom-up approach toward where the boundaries should be versus having a top-down authoritarian approach of where the boundary should be,” says Ming-Cheng Lo, a professor of sociology and East Asian studies at the University of California, Davis, in a phone call from Taiwan.

Yet Ms. Lo observes that many Western publications – including The Wall Street Journal, The Atlantic, and National Review – have mused that China’s onerous clampdown on its citizenry might be the most effective response to COVID-19. Professor Neil Ferguson, a controversial former adviser to 10 Downing St. in its response to the pandemic, told the British newspaper The Times that he initially didn’t think it would be possible to follow the Chinese model of a stringent lockdown: “It’s a communist one-party state, we said. We couldn’t get away with it in Europe, we thought. … And then Italy did it. And we realized we could.”

Britain stands out in West

Britain has overseen one of the strictest lockdowns of any Western democracy. On Thursday, Parliament voted to extend the Coronavirus Act for another six months. A new restriction would fine English travelers £5,000 ($6,850) for nonessential travel. More contentious still is the government’s pandemic ban on outdoor gatherings of two or more people. Earlier this month, a nurse in Manchester was fined £10,000 for organizing a 40-person protest over pay for health care workers.

Now, a newly proposed bill would give police leeway to ban any protest if it creates a vaguely specified noise disruption. The British government has already set new precedents over the past year. Until now, the British police have traditionally had independent discretion over how to enforce “soft laws,” or government guidance. Yet during the pandemic the secretary of state for the Home Department breached that wall by briefing police on such matters. The new bill would give the home secretary power to define prosecutable behaviors.

“The historic policing norm in the U.K. has been what we call policing by consent,” explains David Mead, a professor of U.K. human rights law at the University of East Anglia. “Police are drawn from us. They are not agents of the government. They are just citizens in uniform with very few extra powers. … We have arm’s-length police control from governments so the home secretary can’t direct the police, even a junior officer, how to enforce the law.”

Mr. Mead is concerned that the proposed measures will lead to a real crisis in some state institutions, particularly the relationship between the police and the people.

In the state of Victoria in Australia, stringent enforcement of lockdown rules by police was one of the reasons for anti-lockdown protests such as the one that Ms. Buhler was arrested for promoting. Protesters were galvanized by scenes such as police surrounding a public housing building in Melbourne last July to enforce lockdown of its 3,000 low-income residents.

“The police in Victoria, had a very, very high degree of esteem and trust from the public prior to the coronavirus,” says Gideon Rozner, director of policy at the Institute of Public Affairs, a free-market think tank in Melbourne. “Of course police get up every day and put their lives on the line and serve the community. But I think that they were very let down by the government, who had them enforcing such absurdly punitive laws. … That’s very, very sad because we don’t want to have a situation in which there is mistrust of the police force. It’s not healthy for an orderly, civilized society.”

As is the case in so many countries – as well as states within the U.S. – Victoria has been sharply divided between those who feel that the government overreached and others who have favored strict measures. Mr. Rozner says some Australians believe that Ms. Buhler’s prosecution is justified for the greater good of maintaining public health. It’s a fraught issue for those on both sides.

Years from now, with the benefit of hindsight and some emotional distance, many countries may take account of their responses to the pandemic. After all, they’ll need to prepare for future public emergencies. Taiwan has already been through a similar process. The nation’s experience with the SARS outbreak in 2003 was characterized by infighting inside the government, political polarization, and cynicism among citizens that led to selfish actions such as keeping infected patients out of their communities.

For the most part, Taiwan hasn’t witnessed a replay of that behavior this time around. A Taiwanese society riven between those seeking reunification with China and those favoring continued independence found harmonious common cause. The two main rival newspapers emphasized the importance of societal collaboration and compassion. Ms. Lo, the Taiwanese sociologist, says that shared desire never to repeat that “traumatic” experience of the SARS outbreak ultimately led to the healing of civil society. It encouraged the Taiwanese to fundamentally reassess the boundaries between personal choice and civic duty during this emergency.

“To have that consensus, then eliminates the need, or at least minimized the need, of having to send police to patrol the streets to see if people who are under quarantine are actually breaking the rules,” says Ms. Lo. “Citizens deliberated among themselves and said, ‘This is a sacrifice that we should all make in order to protect the greater good of all of us.’”

Correction: This article has been updated to the correct the following quote by Prof. Marcella Alsan: “That tension is long-standing, liberty versus security. Are they complements or substitutes?”