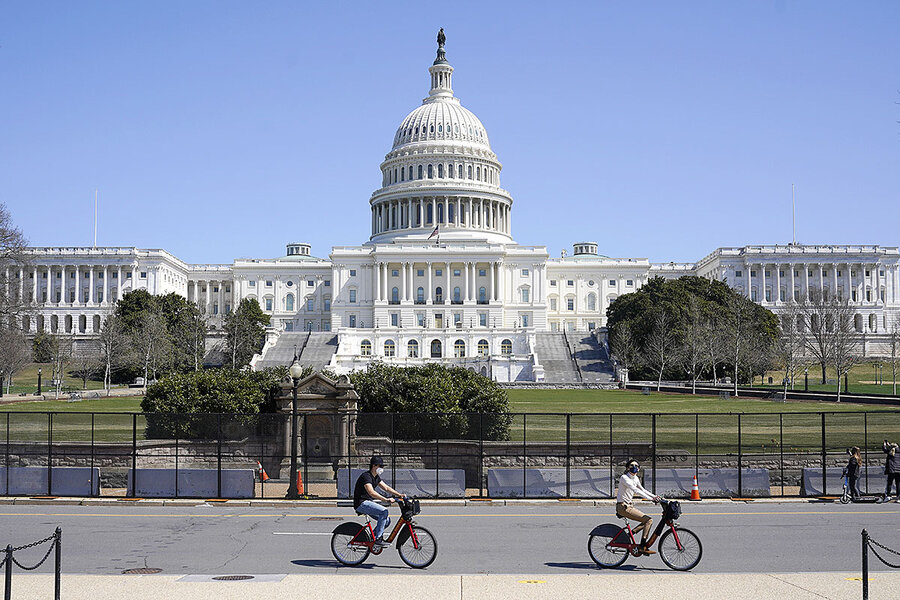 The only thing preventing Democrats from enacting their sweeping agenda on everything from gun safety to voting rights is a long-standing Senate procedure: the filibuster.

Amid a pandemic, crumbling infrastructure, racial injustice, two recent mass shootings, and one of the most contentious presidential elections in modern times, Democrats in Congress argue that America’s challenges are too urgent to wait for the elusive bipartisan consensus needed to overcome a GOP filibuster.

“[Republican Minority Leader] Mitch McConnell cannot have a veto over everything that Congress does. But that’s what the filibuster gives him,” says Sen. Elizabeth Warren, a Massachusetts Democrat. “He exercises that veto to stand in the way of core reforms that our nation needs – protect voting, fight climate change, put basic gun safety regulations in place.”

The filibuster effectively requires 60% support to get bills through the Senate. Does that make it an enforcer of broad consensus or an obstacle to basic lawmaking?

The Democrat-controlled House of Representatives just passed a pair of gun-safety bills, which have taken on more urgency after gunmen killed 18 people in Atlanta and Boulder, Colorado. It also pushed through two pieces of legislation to provide a path to legal status for unauthorized immigrants, and a sweeping voting rights bill. More legislation is in the works on infrastructure, climate change, and a federal minimum wage hike.

Even on issues like guns – where proposed steps are backed by a strong majority of U.S. voters – these bills have little hope of passage in the evenly divided Senate. Although Vice President Kamala Harris can cast a tie-breaking vote to give Democrats a 51-50 edge, on non-budget legislation they would need at least 10 Republicans’ cooperation, since the filibuster procedure allows debate on a bill unless or until 60 senators move to end it.

Most Democrats say that a Senate procedure not enshrined in the Constitution and used historically to thwart civil rights legislation should no longer be allowed to block the will of the majority, however small that majority may be. Republicans, whose leadership resisted pressure to end the filibuster when they held the majority, argue that scrapping the long-standing provision would destroy a key guardrail in the American republic. The effect would be permanent, they argue, ending the Senate’s unique role as an arena for consensus-building in an increasingly polarized country.

“We already have an institution that is instantly responsive to majorities. … The House [of Representatives] was designed to reflect the energy of the people,” said GOP Sen. Ben Sasse in a March 23 speech on the Senate floor, warning against a trend in both parties toward winner-takes-all politics that would send the country “pinballing” from one policy agenda to another depending on who was in power. “The Senate’s job is to enlarge and refine the House’s judgments and to try to build consensus that can last, so that the majority’s will can be advanced while the minority’s rights are also protected.”

Debate over principle of minority rights

The filibuster tends to be more of a thorn in the side of Democrats, who favor a more expansive role for government and feel a moral imperative to address national issues through federally funded initiatives. Republicans, by contrast, prefer a more limited role for the federal government and see it as the right and responsibility of states to address challenges within their borders.

The recent shootings in Atlanta and Boulder add urgency to Democrats’ calls to find ways around partisan gridlock, including ending the filibuster or restoring the “talking filibuster” popularized in Hollywood’s “Mr. Smith Goes to Washington,” in which a single senator would hold forth for as long as 24 hours – dissecting bills, reading the Constitution, or even reciting his favorite recipes for fried oysters.

“Two massacres in two weeks, as well as the heightened level of violence throughout our society especially over the last year, demonstrates that we have an undeniable gun violence crisis,” says Georgia Sen. Jon Ossoff, who says he is open to considering rule changes if they open the way for enacting legislation in the public interest. “I came to the Senate to legislate, not to be mired in gridlock.”

But it’s the issue of voting rights that most immediately and directly challenges the principle of the filibuster, since both issues are predicated on a need to protect minority rights.

“It is a contradiction to say that we must protect minority rights in the Senate while refusing to protect them in society,” says Sen. Raphael Warnock, whose win in Georgia’s January runoff election – together with Senator Ossoff’s – gave Democrats control of the Senate.

“Voting rights is not just another issue, alongside other issues. It is foundational.”

A source of gridlock

Last summer, at the funeral of John Lewis, the civil rights icon and longtime congressman, former President Barack Obama called for honoring his memory by passing more robust voting rights legislation – even if it took ending the filibuster, which he dubbed a “Jim Crow relic.”

President Joe Biden, in his first press conference since taking office, said Thursday he agreed with Mr. Obama’s phrase and voiced support for taking steps to “deal with the abuse” of the filibuster.

Although the filibuster debuted long before the Jim Crow era, and has been deployed against a wide variety of issues, it was used repeatedly to block civil rights legislation. In particular, Southern Democrats mounted a two-month filibuster over the 1964 Civil Rights Act, ending with West Virginia Sen. Robert Byrd holding forth for 14 hours and 13 minutes. In the end, some Republicans joined their Democratic colleagues to reach the two-thirds majority needed to invoke cloture, or an end to debate – marking the first time that the Senate had ever successfully done so on a civil rights bill.

Now, Democrats say it’s vital to again strengthen voting rights as GOP legislatures across the country move to enact more stringent voting laws that they say are necessary to protect election integrity in the wake of a massive spike in mail-in voting.

Earlier this month, the House passed the For the People Act, which seeks to expand ballot access with steps like requiring states to allow online voter registration, requiring states to finish purging ineligible voters from their lists at least six months before an election, and prohibiting states from requiring IDs, notarization, or witness signatures to obtain an absentee ballot. The bill passed 220-210, with no Republican support.

If Democrats scrapped the filibuster to clear the way for its passage, Minority Leader McConnell – invoking Thomas Jefferson’s warning that “innovation should not be forced on slender majorities” – vowed to use a series of other procedural moves to bring the Senate to a grinding halt and prevent Democrats from disregarding the will of tens of millions of voters.

“This chaos would not open up an express lane for liberal change,” he said in a March 16 speech. “The Senate would be more like a 100-car pileup. Nothing moving.”

“What you sow, you reap”

Since the 1964 filibuster of the Civil Rights Act, the threshold for invoking cloture has been lowered to 60 votes. But that’s still an extraordinary hurdle for the Senate’s 50 Democrats in today’s climate of party-line votes. Hence, the pressure on Democrats to get rid of the filibuster, which was first made possible in 1806 due to the deletion of a Senate rule. Used sparingly at first but with increasing frequency in the 20th century, it is today the main tool in Republicans’ pocket to block President Biden’s agenda.

Two Senate Democrats, Arizona’s Kyrsten Sinema and West Virginia’s Joe Manchin, have staunchly vowed to uphold it in at least some form, depriving Democrats of the 51 votes they would need to overturn it. Now filibuster “reform” has become a litmus test in some key 2022 battlegrounds, where Democratic candidates are already vowing to scrap the procedure if they’re elected.

But it’s not so long ago that Democrats themselves used the tool they now deem a Jim Crow relic. Sen. Tim Scott of South Carolina, a Black Republican whose police reform bill was blocked by a Democratic filibuster last year after they deemed it “weak tea,” pushes back against the idea that the procedure has racist undertones.

“I think they are using it when they want to in ways that they want to, and it’s inconsistent with anything that has to do with any history of race,” he says.

Even as the momentum grows for scrapping the filibuster, there’s a clear recognition of the danger of it backfiring politically – especially if Republicans retake control in 2022.

“If Democrats make the decision to blow up the Senate, and turn it into a partisan jackhammer, that will be an historic mistake,” GOP Sen. Ted Cruz told reporters, wagering that Democrats would come to regret the decision, just as they have Democratic Majority Leader Harry Reid’s decision to end the filibuster for judicial appointments and executive branch nominations in 2013, which later benefited Republicans.

“What you sow, you reap,” admits Sen. Bernie Sanders, the Vermont independent. “But I think that in this particular moment in American history, given the enormous crises that we face, we’ve got to act for the working families of this country.”

Idaho Legislature shuts down due to Covid-19 outbreak

At least 5 dead as tornadoes tear through Alabama

To fight pandemic, people gave up liberties. Will they get them back?