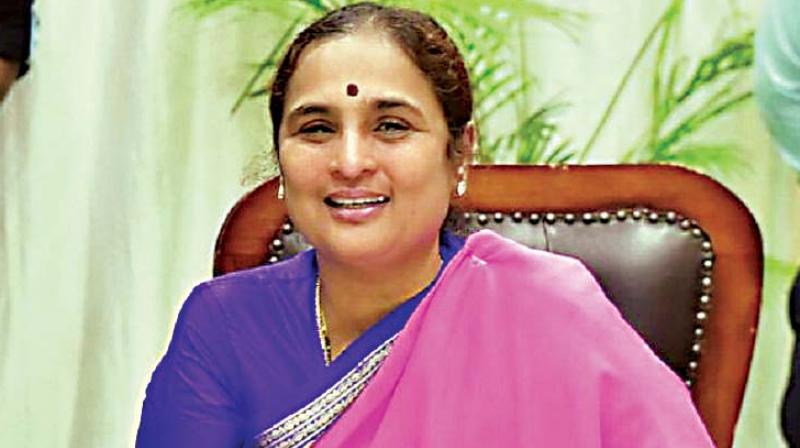 TIRUPATI: Former chief secretary of Karnataka, K. Ratna Prabha, is the BJP candidate for by-election to the Tirupati parliamentary constituency. She had worked in the AP and Karnataka cadre.

Sunil Deodhar, the national secretary of BJP and co-in-charge of party affairs in the state congratulated the former IAS officer through a tweet on his official twitter wall on Thursday.

As several retired bureaucrats were aspiring for party ticket, the BJP that entered into an alliance with Jana Sena has struggled hard to finalise its candidate.

A native of Prakasam district, Ratna Prabha served in various government departments and retired from the service in 2018 after serving 37 years in AP and Karnataka. Her father K. Chandrayya, her husband Vidya Sagar and brother Pradeep Chandra had also served as AP cadre IAS officers.

The 1981 batch IAS officer served as collector of several districts in Karnataka, as secretary of various departments and finally as chief secretary. She also served as secretary to the IT and communications department in AP.

Notably, she had won the Woman of the Year award from American Biographical Institute Inc, USA, for two successive years, in 1999 and 2000.

She is known for launching a literacy campaign in a big way as a pilot project in 1991. During her term as the additional CS, Ratna, a Dalit, played a vital role in paving the way for the legislation that gives reservations in promotions to SC/ST state government employees.

She joined the BJP in April 2019 in the presence of BJP state president BS Yeddyurappa in Kalburgi.

Meanwhile, CBI had framed charges against Ratna Prabha in the illegal assets case of YS Jaganmohan Reddy. CBI charged her for allegedly extending undue favours to Indu Tech Pvt Ltd in allotting land in her capacity as secretary to the IT and communication department.

However, the Hyderabad high court quashed the charges framed against her by the CBI in June 2014.

Dhoom dhaam enthralls one and all