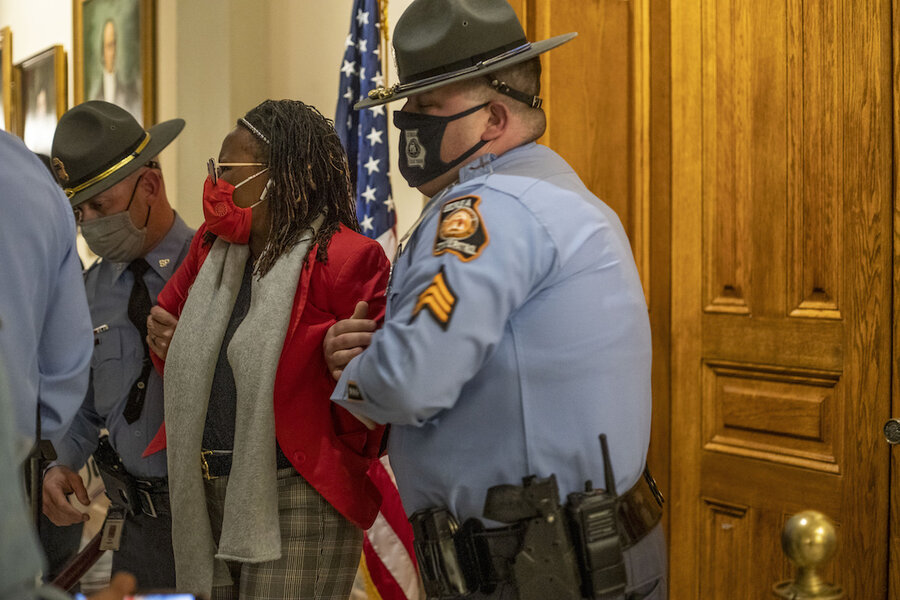 Georgia Gov. Brian Kemp drew protests Thursday as he signed into law a sweeping Republican-sponsored overhaul of state elections that includes new restrictions on voting by mail and greater legislative control over how elections are run.

Democrats and voting rights groups say the law will disproportionately disenfranchise voters of color. It is one of a wave of GOP-backed election bills introduced in states around the country after former President Donald Trump stoked false claims that fraud led to his 2020 election defeat.

President Joe Biden called such GOP efforts “un-American” and “sick” during a news conference Thursday. And a group of voter mobilization groups filed a lawsuit late Thursday in federal court in Atlanta challenging the new law.

The Republican changes to voting law in Georgia follow record-breaking turnout that led to Democratic victories in the presidential contest and two United States Senate runoffs in the once reliably red state.

“After the November election last year, I knew, like so many of you, that significant reforms to our state elections were needed,” said Mr. Kemp, who drew Mr. Trump’s ire after certifying Mr. Biden’s victory in Georgia.

Mr. Kemp signed the bill less than two hours after it cleared the Georgia General Assembly. The state House approved it 100-75, before the state Senate quickly agreed to House changes, 34-20. Republicans supported it, with Democrats opposed.

At his first news conference, Mr. Biden harshly criticized Republican moves to limit voting rights and vowed to do all he could with allies to stop the effort.

“We are witnessing right now a massive and unabashed assault on voting rights unlike anything we’ve seen since the Jim Crow era,” Ms. Butler added.

As Mr. Kemp delivered his remarks he was interrupted by a commotion before a livestream of the event cut out.

Democratic state Rep. Park Cannon, who is Black, was arrested by Capitol police amid a protest after knocking on the door of the governor’s office during his remarks.

Video captured by a bystander shows Ms. Cannon, who is handcuffed with her arms behind her back, being forcibly removed from the Capitol by two officers, one on each arm. She says “Where are you taking me?” and “Stop” as she is taken from the building.

Ms. Cannon was charged with felony obstruction of law enforcement, punishable by one to five years in prison, and with disrupting a session of the General Assembly. She was released late Thursday night.

An attorney for the Georgia lawmaker said authorities overreached in the case.

“This was a law enforcement overreach on all the charges, and my hope is that after examining the file, the district attorney will dismiss the charges,” Ms. Cannon’s lawyer, Gerald Griggs, said Friday. Mr. Griggs said he had already spoken to Fulton County District Attorney Fani Willis.

The Georgia law requires a photo ID in order to vote absentee by mail, after more than 1.3 million Georgia voters used that option during the COVID-19 pandemic. It also cuts the time people have to request an absentee ballot and limits where ballot drop boxes can be placed and when they can be accessed.

Democratic Rep. Rhonda Burnough said the bill is based on lies told by Republicans after November’s election.

“Georgians turned out in record-breaking numbers because they could access the ballot,” Ms. Burnough said. “Lies upon lies were told about our elections in response, and now this bill is before us built on those same lies.”

Democrats say the law is a power grab by Republicans who are threatened by Mr. Biden’s presidential victory in Georgia in November and the twin Democratic victories of U.S. Sens. Raphael Warnock and John Ossoff in January.

Republican Rep. Jan Jones said the provisions cutting the time people have to request an absentee ballot are meant to “increase the likelihood of a voter’s vote being cast successfully,” after concerns were raised about mail ballots not being received in time to be counted.

One of the biggest changes gives the GOP-controlled legislature more control over election administration. That has raised alarms about potential greater partisan influence.

The law replaces the elected secretary of state as the chair of the state election board with a new appointee of the legislature after Republican Secretary of State Brad Raffensperger rebuffed Mr. Trump’s attempts to overturn Georgia’s election results. It also allows the board to remove and replace county election officials deemed to be underperforming.

That provision is widely seen as something that could be used to target Fulton County, a Democratic stronghold covering most of Atlanta, which came under fire after long lines plagued summertime primary elections.

Republican Rep. Barry Fleming, a driving force in crafting the law, said that provision would only be a “temporary fix, so to speak, that ends and the control is turned back over to the locals after the problems are resolved.”

The law also reduces the timeframe in which runoff elections are held, including the amount of early voting for runoffs. And it bars outside groups from handing out food or water to people in line to vote.

The law does not contain some of the more contentious proposals floated by Republicans earlier, including limits on early voting on Sundays, a popular day for Black churchgoers to vote in “souls to the polls” events. It instead mandates two Saturdays of early voting ahead of general elections, when only one had been mandatory, and leaves two Sundays as optional.

A lawsuit filed late Thursday in the U.S. District Court in Atlanta by three groups – New Georgia Project, Black Voters Matter Fund, and Rise – challenged key provisions of the new law and said they violated the Voting Rights Act. There was no immediate response from Georgia officials.

Mr. Warnock said Ms. Cannon is a member of Ebenezer Baptist Church, where he is the pastor, and he visited her inside the jail before her release.

No evidence yet of federal hate crime in Atlanta-area spa killings, officials say

‘The truth matters’: Dominion Voting sues Fox News for $1.6B