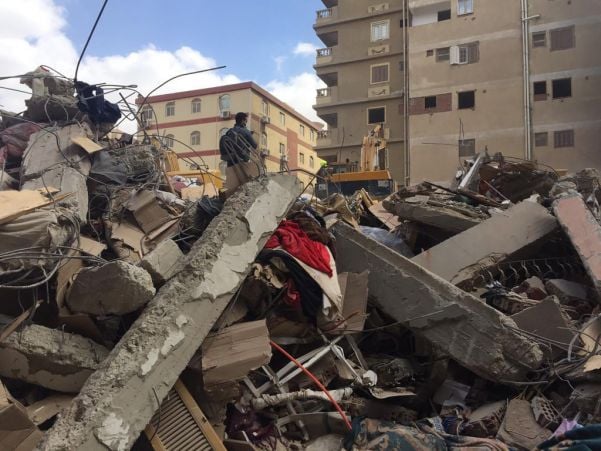 The death toll from the collapse of a nine-story apartment building in Cairo has climbed to 18 people, according to Egyptian state media.

The building collapsed in the Egyptian capital early on Saturday. State newspaper Al-Ahram said that search and rescue workers recovered the bodies over the course of the day.

Excavators could be seen digging through the debris in the el-Salam neighbourhood on Saturday morning.

Police cordoned off the area, keeping back the curious and people apparently looking for relatives in the building.

“They took four people out in front of me, who looked like they were almost gone,” said Mohamamed Mostafa, a resident of the neighbourhood.

At least 24 others were injured and taken to hospitals, according to a morning statement by Khalid Abdel-Al, the administrative head of Cairo governorate. The tally of those killed by his office stayed at nine as of Saturday evening.

It was not immediately clear what caused the building’s collapse. An engineering committee was formed to examine the structural integrity of neighbouring buildings, Mr Abdel-Al said.

Building collapses are not uncommon in Egypt, where shoddy construction is widespread in shantytowns, poor city neighborhoods and rural areas.

With real estate at a premium in big cities like Cairo and the Mediterranean city of Alexandria, developers seeking bigger profits frequently violate building permits. Extra floors often are added without proper permits.

The government has recently launched a crackdown on illegal building across the country, jailing violators and in many cases destroying the buildings.