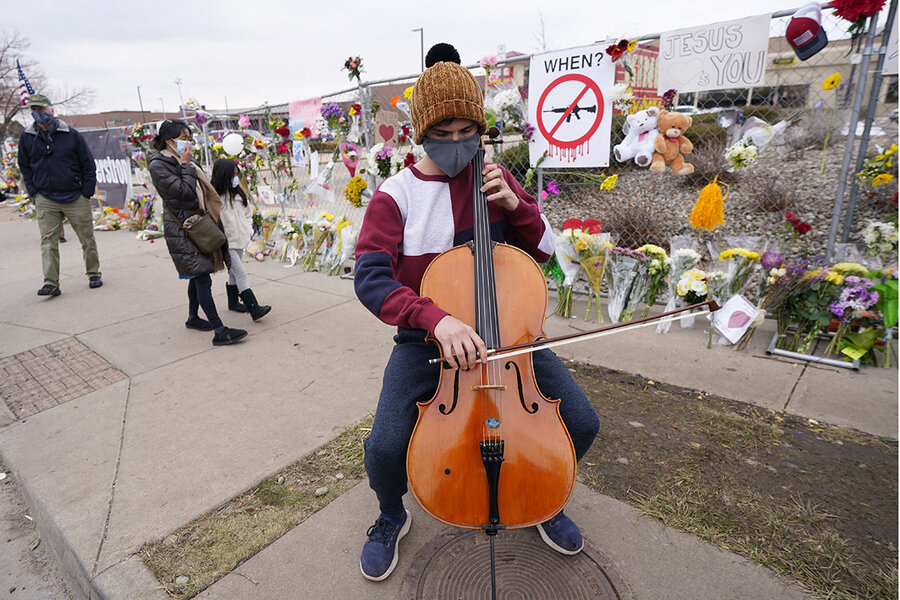 Sammie Lawrence IV was hungry on Monday before his shift as a marijuana trimmer in Boulder. Around 2:30 p.m., he was perusing the deli section of a local King Soopers grocery store when he heard several pops.

“Then I saw people running,” he says.

Mr. Lawrence realized what was happening: A shooter had entered the store to kill employees and grocery shoppers in what would become the country’s deadliest mass shooting of the year to date. Police now suspect Ahmad Al Aliwi Alissa of killing 10 people, including police officer Eric Talley, before he surrendered almost an hour later. A motive isn’t clear.

For Colorado survivors of mass shootings, Monday’s attack – and the immediate choosing of sides in the gun control debate – were sadly familiar. Healing is an individual journey, they say. For some, activism helps. For others, it adds trauma.

Mr. Lawrence says he joined others running to the back of the store, away from the shots. He helped escort an older man in a walker and others down a loading dock and to safety. Mr. Lawrence says he then roamed the strip mall around the grocery store, and when the shooting ended, he began to comfort traumatized survivors who, unlike him, had witnessed deaths.

Mr. Lawrence now has another struggle: grappling with his firsthand experience of surviving a mass shooting in his own community.

“I’m getting better one day at a time,” Mr. Lawrence says two days after the shooting. “I know I’m forever changed by this incident. I know I am.”

He joins the ranks of many Coloradans who have a personal link to a mass shooting, beginning with the Columbine High School massacre in 1999, who are forever changed, too.

Colorado is best known as an outdoor enthusiast’s paradise of grandiose mountain peaks, rich in Western history. But over the past two decades it also has become synonymous with that particularly American tragedy: the mass shooting. It’s not that Colorado is home to the most shootings – it ranks eighth among U.S. states, according to criminologist Jillian Peterson – but that it has endured so many high-profile ones. And that legacy is something that more Coloradans, particularly survivors, are wrestling with.

Recent elections have also solidified its transition from a purple state to a Democratic stronghold. That evolution has fueled political polarization that makes tackling societal problems like mass shootings even more divisive.

Thirteen victims died at Columbine in 1999 in a tragedy that brought school shootings to the national consciousness. Coloradans again watched the news horrified in 2012, when 12 victims died and 70 more were injured in the Aurora movie theater shooting. Both massacres rocked the country. Since Columbine, the state has had to grapple with a series of additional shootings, including at the New Life Church and a Planned Parenthood in Colorado Springs, at a Thornton Walmart in 2017, and the death of student Kendrick Castillo in a 2019 school shooting in another Denver suburb.

But the tragedy Monday also tore open political animosities between mass shooting survivors. Some told the Monitor they’re gearing up for renewed political battles to prevent the next tragedy, while others see history repeating itself in blame games and calls for gun control.

Denver resident Sara Grossman says she was already reeling when she heard about Boulder’s mass shooting. A gunman had killed eight people in Atlanta just days before.

Mass shootings renew personal grief for Ms. Grossman. Five years ago, she lost a close friend in the Pulse nightclub massacre in Orlando, Florida. She says she used to frequent that club before she moved to Colorado.

“I had no idea why, but the first couple of times I tried to go grocery shopping after I returned from [my friend’s] funeral in Orlando, I had such anxiety about going into large, enclosed spaces,” Ms. Grossman says. “It’s even harder when the thing that you’re actually anxious about comes through.”

From tragedy to activism

Jane Dougherty still remembers picking up her children from another school near Columbine High School on the day of the massacre, more than 20 years ago. Unfortunately, she would only become more tied to mass shootings as time wore on. She says she was raised in Aurora, a community turned on its head after the 2012 theater shooting. Later that year, Ms. Dougherty’s sister Mary Sherlach was killed in Connecticut’s Sandy Hook shooting.

She says she understands why Coloradans feel emotionally weary after so many tragedies.

Today, Ms. Dougherty is an activist with Everytown for Gun Safety, a group that has identified gun control as the avenue to limit gun violence. She channeled her grief after the death of her sister into determination, lobbying to push through historic gun control efforts in Colorado’s state legislature.

In the wake of the fierce political debate that year, voters removed two Democratic state senators from office in a recall election spearheaded by gun rights activists – an indication that Coloradans remained divided about mass shootings and gun controls.

But unlike those in Congress, Democrats in the state General Assembly continued to see more success enacting gun control legislation.

They passed a so-called red flag law in 2019 that allows authorities to seize firearms from people deemed dangerous to themselves or others. State Rep. Tom Sullivan, whose son Alex died in the Aurora theater shooting, sponsored the bill.

Capitalizing on a tragedy?

Gun rights activists framed the shooting Monday as the nail in the coffin for Colorado’s gun controls. And the longtime arguments about the nature of mass shootings have flared up again.

Several activists quickly noted this week that the red flag law didn’t stop Mr. Alissa from legally buying an assault weapon six days before the Boulder shooting, according to the Associated Press, despite his reported history of violence and instability. Neither did the mandated background check or other rules. Gun control activists, meanwhile, point out that a judge blocked Boulder’s 2018 ban on the sale of assault-style weapons and large-capacity magazines just this month.

“The corpses were not even cold before they started calling for gun control,” he says.

For her part, Ms. Dougherty isn’t deterred. She says her resolve to pass new gun control laws is only strengthened.

“You can either crawl back into your hole, or you get back up and keep working,” she says.

Top state Democrats may introduce an assault-style weapons ban during the ongoing legislative session, according to media reports. Currently, they have enough votes to pass laws without the assent of Republicans, who have generally opposed gun controls.

Columbine survivor Evan Todd is watching the renewed tension from his home in suburban Denver. He’s an outspoken proponent of guns as a deterrent to mass shootings, and he’s generally opposed to politicians revoking gun rights.

But he is concerned that survivors of the King Soopers massacre will suddenly find themselves thrust into the fierce debate about gun control.

They’ll quickly be asked to pick sides, he says, in a way that can be detrimental to their own healing journey. He remembers having microphones and cameras thrust in his face as a teenage survivor of a nightmarish mass shooting.

“Be careful taking time and taking care of yourself,” he says, as if speaking directly to survivors. “You’re not alone. There’s people out there, whether it’s in schools, families, churches, police officers – there’s always someone you can turn to when you’re going through difficult times, whatever it is.”

Ms. Grossman says political advocacy became a core part of her own healing process after losing her dear friend five years ago. But she cautions that the healing process can be “completely different” for individuals. “People deal with their own grief and their own anguish in totally different ways,” she says.

In Boulder, Mr. Lawrence becomes emotional when recalling his experiences inside the King Soopers Monday.

His immediate plans are to get himself into therapy. His mother flew out from Ohio to surprise him and help support him as he starts to heal. He’s beginning to cope with it all.

“I now understand what it was like for the kids in Aurora and Columbine,” Mr. Lawrence says. “I get it. And I wish I didn’t.”