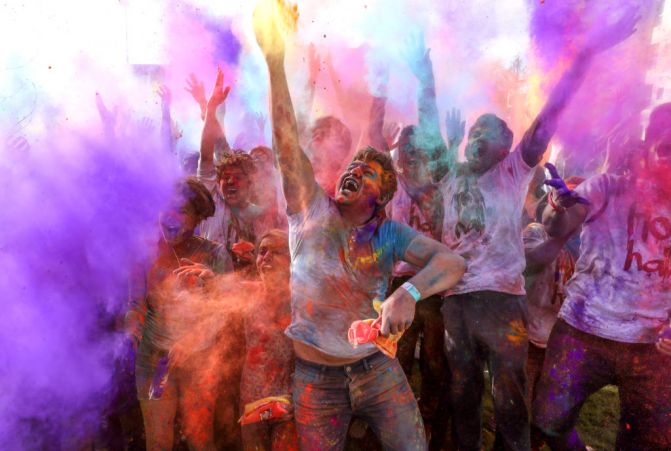 Marking the arrival of spring, Holi is a national holiday in India and Nepal, held to coincide with the last full moon day of winter, according to the Hindu lunar calendar. © PA Archive/PA Images

You’ve probably seen photos or videos online of huge crowds of people jubilantly throwing brightly coloured powder and paint at one another as part of Holi Festival (March 28nd and 29th).

But do you know why this glorious rainbow display happens every year? Or where the name comes from?

1. It’s a celebration of good triumphing over evil

Marking the arrival of spring, Holi is a national holiday in India and Nepal, held to coincide with the last full moon day of winter, according to the Hindu lunar calendar.

The religious origin centres around the legend of Holika (hence the name Holi). The sister of the demon king Hiranyakashipu, Holika was killed in a fire after she attempted to murder her nephew Prahlad, who prayed to the god Vishnu and was saved from the fire.

2. It starts with bonfires

Symbolising the fire that killed Holika, in India the festival starts the night before Holi with the lighting of bonfires (called Holika Dahan). People gather around the fires – sometimes topped with an effigy of Holika – celebrating the coming of spring (the heat of the flames is said to represent the onset of warmer weather).

Also known as the ‘festival of colours’, Holi honours the vibrant hues of spring, and the bright powders and colour waters symbolise flames as well, but there’s a deeper meaning behind why people cover each other with pigmented ‘abir’ powder and ‘gulal’ paste.

The colours act as a great leveller, making everyone equal (or equally messy) no matter their caste, culture or religion.

4. Food is an important part of the celebrations

No party would be complete without a delicious spread, and during Holi it’s all about sweet treats.

To fuel all that energetic paint throwing, big batches of desserts are served up, such as Gujiya, flaky pastry parcels filled with dried fruit, served with sugar syrup; malpua, deep-fried mini pancakes; and thandai, a sweet, milky drink flavoured with the likes of cardamom, saffron, fennel seeds and rosewater.

5. As is a certain stimulating drink

Bhang is the name of a traditional Indian cannabis-infused drink often consumed during Holi, mixed with creamy lassi or the aforementioned thandai.

While cannabis is technically illegal in India, the law banning the consumption of the plant neglects to mention the leaves, the part used to make bhang.

6. Nepal has its own Holi traditions

In Nepal, Holi begins when a ceremonial bamboo pole called a ‘chir’ is erected in capital Kathmandu. Strips of cloth are tied to the pole as good luck charms, and it is later burned in a bonfire.

As well as the usual paint and powder, in Nepal people also pelt each other with water balloons called ‘lolas’.

7. It’s celebrated all over the world

While the biggest celebrations take place in India and Nepal, people around the world gather each year to mark the festival, some for religious reasons, others just for fun, from Berlin to Barcelona, Singapore to Suriname (pandemic restrictions allowing).