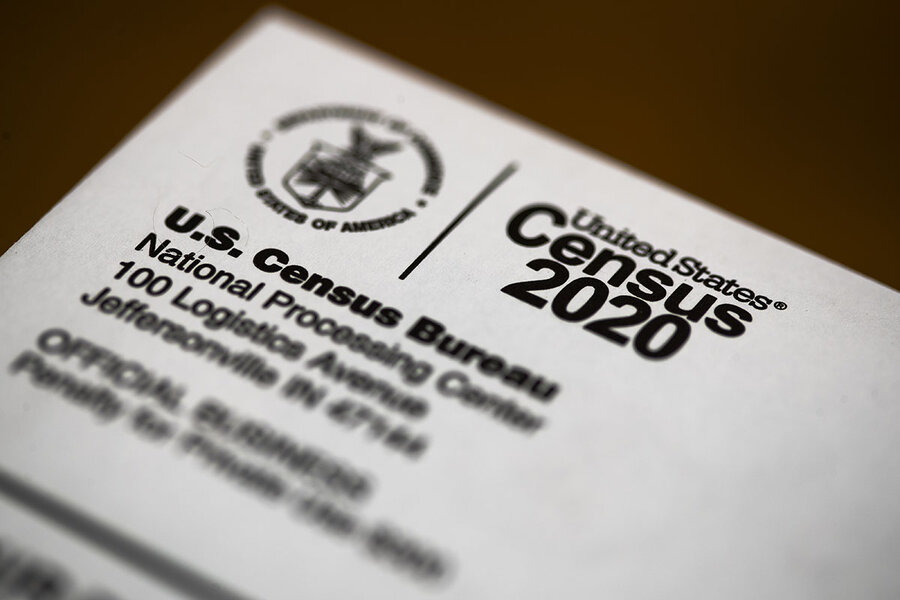 Just once a decade America’s political boundary lines get redrawn – and this year there’s an extra plot twist.

The problem: The pandemic happened to coincide almost precisely with the census timetable for counting America’s population, which determines each state’s share of the 435 seats in the U.S. House of Representatives.

On March 11, 2020, the same day the U.S. Census Bureau published a press release announcing that its survey of households was getting underway, the World Health Organization declared COVID-19 a pandemic. Not three weeks later, the Census Bureau announced that it would be delaying its field operations (a vital part of the process in which census workers follow up with hard-to-reach communities) to reduce the spread of COVID-19.

Census delays are creating hurdles this year for steps that are basic democracy: drawing new political maps, vetting their fairness in courts, and giving potential candidates time to mobilize for the next election.

At an already fraught time, amid deep political rifts and with control of Congress closely divided, the coronavirus pandemic is severely delaying the arrival of new population data to the states. The result could be delays in drawing district maps, potentially threatening normal routines such as candidates deciding to enter primary races for the 2022 elections.

Although the bureau eventually finished its count in the fall, it recently announced that states can expect to receive their data by the end of September – six months later than planned.

In some states with redistricting deadlines written into law, delay is more than just inconvenient – it’s illegal. Ohio’s Constitution, for example, mandates that the state Legislature agree on new districts by Sept. 30, the day the data is slated for release. At least two states – Ohio and Alabama – have already filed lawsuits against the U.S. Census Bureau for the delay.

With ​states scrambling to redraw maps ​on a tightened calendar, the process could potentially blow past filing deadlines for congressional primaries in almost every state​. W​atchdogs worry that ​politicians will rush out ​new maps drawn to favor their party, without​ the usual level of oversight against gerrymandering.

“There will be less time for challenges, and it’s likely that that will encourage some redistricting bodies to get greedy,” says Justin Levitt, a law professor at Loyola University who has written several papers on redistricting and manages the website All About Redistricting.

While the challenges are formidable, he is hopeful states can avoid a political train wreck. “I don’t think [the delay] has to be the disaster that some people have made it out to be,” says Mr. Levitt.

It’s not an exaggeration to say that the nation’s constitutionally mandated population count affects virtually every aspect of Americans’ lives, including how more than $675 billion of federal funds will be distributed for things like schools, hospitals, and roads.

Although the detailed census data that states need for redistricting won’t be available until the fall, on April 30 the Census Bureau will confirm which states stand to gain or lose seats. And by December the bureau had already given population estimates hinting at what the new House makeup will look like.

Texas and Florida, which have seen the greatest population growth in the past decade, are expected to pick up three seats and two seats, respectively. Five other states will likely gain one House district (Arizona, Colorado, Montana, North Carolina, and Oregon), while 10 states, including California and several in the Midwest, will likely lose a representative.

But all states (except for those with only one at-large district) must engage in redistricting, given that populations shift within a state and districts are intended to represent equivalently sized populations. And because new district maps can favor one party or the other – ultimately affecting control of Congress – the process is far from simple. Gerrymandering, the “packing or cracking” of certain populations to increase one party’s chance of winning, has plagued redistricting throughout American history.

Voters’ understanding – and corresponding disapproval – of gerrymandering has increased in recent years, with politicians from both parties arguing for reform. Since the last congressional maps were drawn in 2010, voters in at least four states have approved ballot measures or constitutional amendments that allow for a bipartisan commission, rather than the state legislature, to draw the districts.

“There is this spark of interest from the public that redistricting has never had in the past,” says Kathay Feng, national redistricting director with the organization Common Cause.

“It’s not just that legislatures should do the right thing, it’s that regular people are demanding it and that’s totally different.”

Still, citizens and outside groups have increasingly turned to the courts to rule against gerrymandering. After the 2010 census, for example, fewer than a dozen states redistricted without any legal objection to their maps. Citizens and outside groups typically have a full six months to litigate against gerrymandering, says Michael Li, senior counsel for the Brennan Center’s Democracy Program. This year, he predicts, the time for post-redistricting litigation has shrunk to two or three months.

“Litigation about maps is sometimes the only way you get fair maps,” says Mr. Li. “It’s a much shorter time period [this year], which means it’s much more likely that discriminatory things are left in place for the 2022 election.”

The view from Texas’ 6th District

That is, if 2022 congressional elections can even happen on time.

According to the Monitor’s count, the redistricting process took an average of 13 months following the 2010 census. States will have to beat that average this year, once the data arrive on Sept. 30, or the map-drawing process will surpass the primary election filing deadlines for congressional elections in all but three states.

And until they know the new maps, local party officials and organizers don’t know where to focus their resources.

If Texas’ 6th Congressional District, for example, an area south of Fort Worth and Dallas that currently looks like a bottom-heavy number 8, is drawn to include more of the cities’ suburbs, Democrats will have a fighting chance, says Kelly Blackburn, Democratic Party chair for Ellis County, Texas.

“But everything is at a standstill,” says Ms. Blackburn.

Politicians or potential candidates can’t launch campaigns if they don’t know what district they will represent.

“It creates a lot of uncertainty, especially knowing how precisely we expect them to gerrymander,” says Amanda Litman, executive director of Run for Something, an organization that helps young progressives run for office. “Your side of the street could be cut out of the district you are planning to run in.”

“The most successful first-time candidates are the ones who can start 18 months out,” says Ms. Litman. “The only resource in a campaign you can never get back is time.”

States could – and should – get a head start on mocking up potential district maps without the final data, say experts. In its press release announcing the delay, the Census Bureau suggested states could “begin to design” their new districts with census data published in the past two years.

And among the states with redistricting deadlines by law, officials should proactively ask local courts for a delay, says Mr. Levitt. California officials, for example, already appealed to the state’s Supreme Court and were granted an extension. And as several did for COVID-19, states should consider moving their primary filing deadlines.

Even before COVID-19, last year’s count was challenging for the Census Bureau. The 2020 count featured the bureau’s first attempt at a primarily digital census, and the Trump administration’s failed attempts to include a citizenship question taxed the bureau’s staff and resources.

But COVID-19 jeopardized the fundamental purpose of the decennial census: to document where and how Americans live.

“College students moved back in with their parents; older kids moved in with the grandparents to take care of them,” says Ms. Feng with Common Cause. “All these different living situations mean that even when the bureau could restart their field operations, they weren’t looking at living conditions that one might normally be in.”

Which is why several redistricting experts say the data delay, while stressful, isn’t inherently bad. The delay ensures that the Census Bureau will do the best count possible by double-checking against duplicates. So given the circumstances, the delay is a “very, very positive thing,” says Mr. Levitt.

“When you take a picture of [the U.S. in] April 2020, that picture looks very odd,” he adds. “It’s not clear how much the delay can fix that picture, but it means they are giving it a shot.”