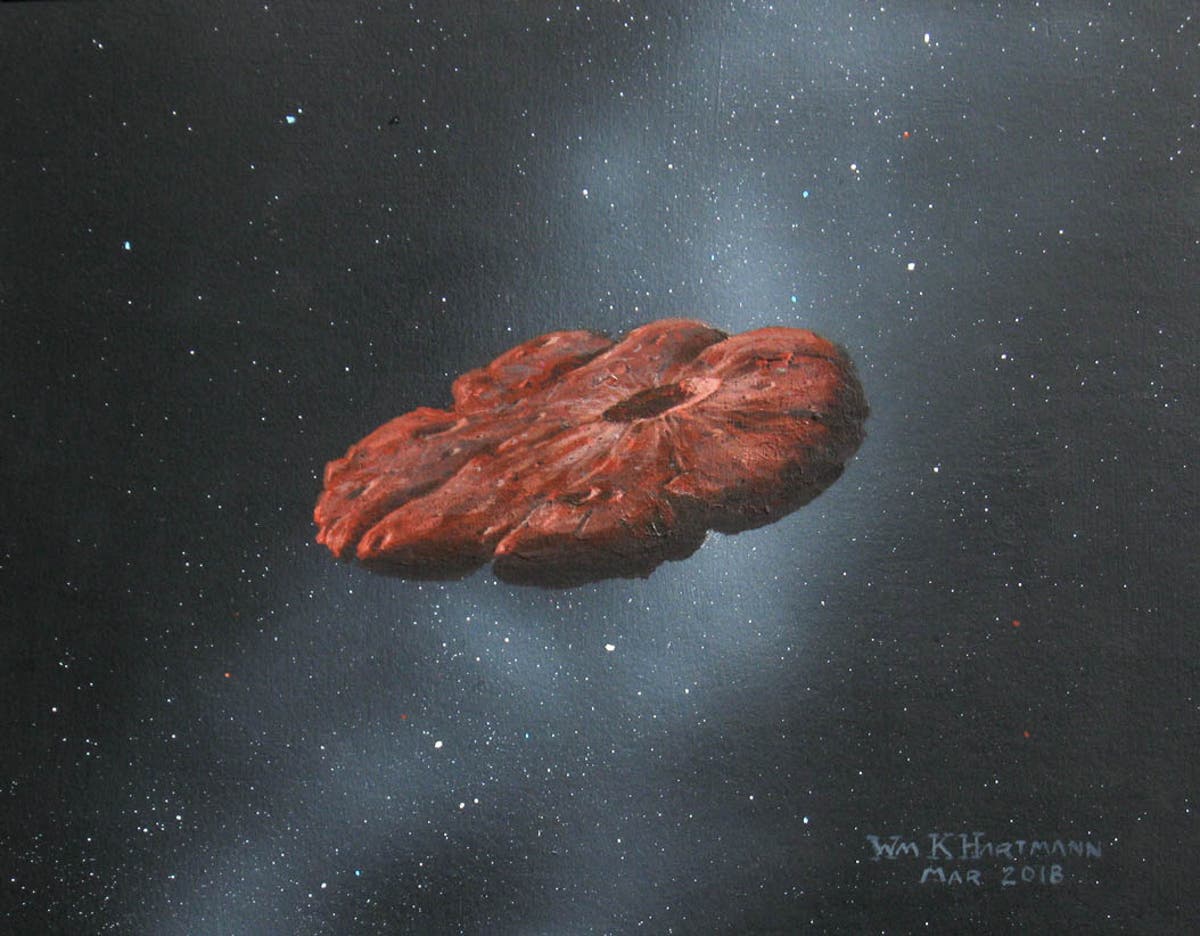 The first interstellar object to pass through the solar system has finally had its identity revealed.

‘Oumuamua, which means ‘scout’ or ‘messenger’ in Hawaiian, was originally spotted in 2017. The mysterious object was moving at 196,000 miles per hour, and while it looked similar to a comet there were aspects to it that simply did not add up.

While the strangely flat object moved like a comet, it appeared to have a surface made of solid nitrogen – similar to the surface of Pluto.

A new study, published as a pair of papers in the Journal of Geophysical Research: Planets, sheds more light on this theory.

is and we can reasonably identify it as a chunk of an ‘exo-Pluto,’ a Pluto-like planet in another solar system,” said Steven Desch, an astrophysicist at Arizona State University and an author of the new study.

“Until now, we’ve had no way to know if other solar systems have Pluto-like planets, but now we have seen a chunk of one pass by Earth.”

The scientists believe that ‘Oumuamua was knocked from the surface of a Pluto-like world half a billion years ago, rejected from its own solar system as it headed towards our own.

‘Oumuamua likely gained its flat appearance when its mass melted away as it flew close to our sun, according to Alan Jackson, a co-author of the study. More than 95 per cent of the comet’s body was reduced, he adds, making it more flattened than any other known solar system object.

“Being made of frozen nitrogen also explains the unusual shape of ‘Oumuamua. As the outer layers of nitrogen ice evaporated, the shape of the body would have become progressively more flattened, just like a bar of soap does as the outer layers get rubbed off through use,” Jackson said.

A number of other factors also indicated that ‘Oumuamua was no ordinary comet: it entered the solar system at a lower velocity than expected, indicating that it had not been travelling in space for a long period of time.

It also acquired a push from the Sun known as a ‘rocket effect’ that was greater than would usually be expected.

“That was an exciting moment for us,” Desch said. “We realized that a chunk of ice would be much more reflective than people were assuming, which meant it could be smaller. The same rocket effect would then give ‘Oumuamua a bigger push, bigger than comets usually experience.”

Finally, ‘Oumuamua also lacked a visible tail that is a key characteristic of most comets, implying that there was not gas escaping from the cosmic rock.

“We knew we had hit on the right idea when we completed the calculation for what albedo (how reflective the body is) would make the motion of ‘Oumuamua match the observations,” Jackson said. “That value came out as being the same as we observe on the surface of Pluto or Triton – bodies covered in nitrogen ice.”

When ‘Oumuamua was first detected its inexplicable origins led some to speculate that it was a piece of alien technology. While many will be disappointed that this is not our first official encounter with extra-terrestrial life, the discovery allows scientists to examine extrasolar systems in a new way.

“It’s hoped that in a decade or so we can acquire statistics on what sorts of objects pass through the solar system, and if nitrogen ice chunks are rare or as common as we’ve calculated,” Jackson said.

“Either way, we should be able to learn a lot about other solar systems, and whether they underwent the same sorts of collisional histories that ours did.”

Elon Musk sells NFT of his tweet with one bidder offering $1.1m