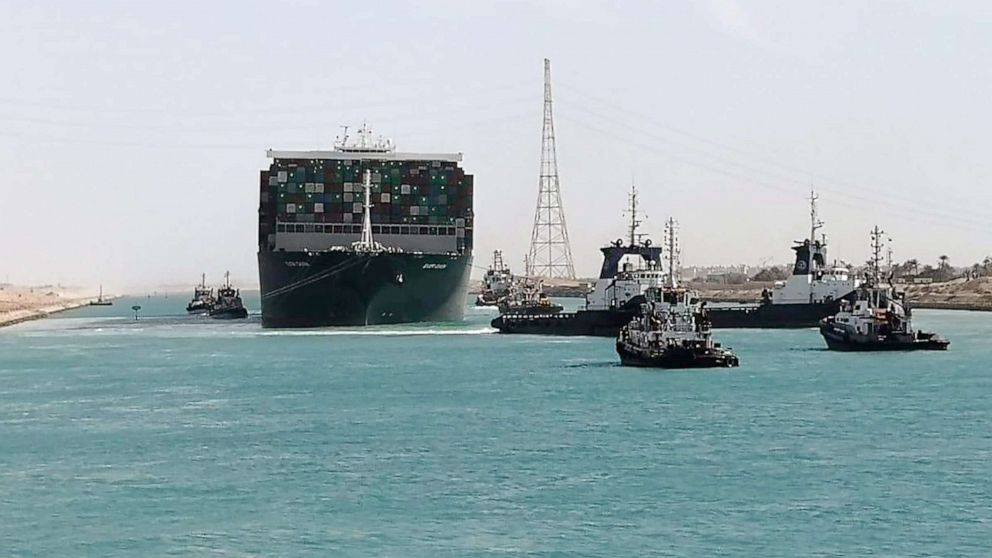 LONDON and CAIRO — The colossal cargo ship that became stuck on the banks of Egypt’s Suez Canal last week, blocking traffic through the crucial waterway, was finally freed from the shoreline by engineers on Monday afternoon, officials said.

The so-called Ever Given, a 224,000-ton, 1,300-foot-long container ship registered in Panama, was “successfully” refloated and its course straightened at around 3 p.m. local time, after engineers spent days trying to pull the fully laden vessel with tugboats, according to statements from Egypt’s Suez Canal Authority and Boskalis Westminster, the parent company of the Dutch salvage firm hired to extract the ship.

Some 30,000 cubic-meters of sand was dredged to help dislodge the Ever Given, along with the deployment of 11 harbor tugs and two seagoing tugs. The Suez Canal was no longer jammed as the massive vessel was towed to a location outside the channel for further inspection, according to Boskalis Westminster.

“I’m extremely proud of the outstanding job done by the team on site as well as the many SMIT Salvage and Boskalis colleagues back home to complete this challenging operation under the watchful eye of the world,” Peter Berdowski, CEO of Boskalis Westminster, said in a statement Monday. “The time pressure to complete this operation was evident and unprecedented.”

The Ever Given, which is almost the size of the Empire State Building, was on its way from China to the Netherlands when it ran aground last Tuesday morning near the southern end of the 120-mile-long artificial waterway that slices through Egypt’s northeast corner. The Suez Canal Authority said a sandstorm and high winds had caused poor navigation and low visibility.

Traffic came to a complete halt while the ship remained stuck sideways across the Suez Canal, one of the world’s busiest trade routes that provides the shortest maritime link for goods traveling from Asia to Europe by connecting the Mediterranean Sea to the Red Sea.

Shoei Kisen Kaisha, the Japanese company that owns the Ever Given, said in a statement last Thursday that it was working with local authorities in the North African country to resolve the situation, which was proving “extremely difficult.”

“We sincerely apologize for causing a great deal of worry to ships in the Suez Canal and those planning to go through the canal,” the company added.

As the blockage neared the one-week mark, there were growing concerns over how it could impact the global economy and supply chains. About 12% of the world’s trade volume passes through the Suez Canal, including approximately 1.9 billion barrels of oil per day.