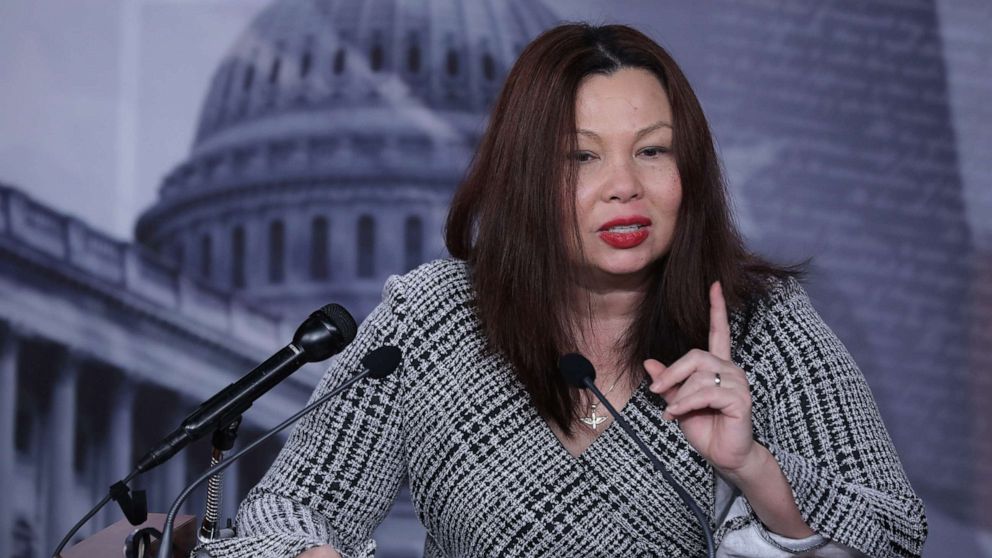 Duckworth had told White House officials in a private call Monday night with Senate Democrats that the lack of representation of Asian American Pacific Islanders in President Joe Biden’s Cabinet is “unacceptable” and said Tuesday that she would oppose all future non-diverse Biden nominees until the problem is rectified — something that could be a problem in the evenly divided Senate.

“There’s no AAPI representation in the Cabinet. There’s not a single AAPI in a Cabinet position. That’s not acceptable,” Duckworth, D-Ill., told reporters Tuesday, offering a rare criticism of the administration by a Democrat.

Hours later, a Duckworth spokesman issued a statement saying she was satisfied with the White House response.

“Senator Duckworth appreciates the Biden Administration’s assurances that it will do much more to elevate AAPI voices and perspectives at the highest levels of government, including appointing an AAPI senior White House official to represent the community, secure the confirmation of AAPI appointments and advance policy proposals that are relevant and important to the community. Accordingly, she will not stand in the way of President Biden’s qualified nominees—which will include more AAPI leaders,” spokesman Ben Garmisa said.

Sen. Mazie Hirono, D-Hawaii, had joined her fellow Asian American colleague in voicing concerns and said that she planned to support Duckworth in her objection to non-diverse nominees.

“I do share Tammy’s concern and disappointment along with AAPIs,” Hirono said. “I’m joining her in that, which means that we would like to have a commitment from the White House that there be more diversity representation in the Cabinet and in senior White House positions. And until that happens, (I) will be able to join her in voting no.”

The senators’ blockade could have had serious consequences for the administration as judicial nominees and scores of lower-level staffers have yet to be confirmed by the Senate.

For example, though the nominee to be head of policy at the Pentagon, Colin Kahl, is expected to be confirmed by the Senate Armed Services Committee on Wednesday — with the support of both Hirono and Duckworth — that’s where their support is expected to end unless they are satisfied with a White House response.

Hirono told ABC News that she also expressed concern about charts and polling data shown to Democrats Monday night by White House deputy chief of staff Jen O’Malley Dillon and senior adviser Mike Donilon. The senator said some charts, like one showing attitudes toward Biden, did not include AAPIs, while another set of data — showing support for the just-passed COVID relief plan — did. Hirono said she wanted to see “consistency” with “significant groups” like AAPIs included.

This all comes as the country grapples with a spike in hate crimes against Asians, punctuated by the shootings in Atlanta last week that left six Asian American women dead.

The two senators said they want to see a plan from the administration for increasing diversity of all kinds — not just AAPI — in jobs at the White House and when Cabinet positions and lower-level posts open up.

Both senators said they were put off Monday night by the answers they said O’Malley Dillon gave in response to their concerns.

Paraphrasing O’Malley Dillon’s response, Duckworth said, “Well, we consider a Trade Representative and the (Office of Management and Budget) director to be Cabinet level, because they sit around the table — and you have Neera (Tanden), and you have Katherine Tai.”

The Senate just confirmed Tai, who is Taiwanese American, but the U.S. trade representative is Cabinet level and not a member of the Cabinet. And the nomination of Neera Tanden, whose parents were from India, was pulled in the wake of controversial tweets and united Republican opposition. The OMB position for which Tanden was nominated is also just Cabinet level.

“To be told that ‘well you have Kamala Harris, we’re very proud of her you don’t need anybody else’ is insulting,” Duckworth continued.

Harris broke ground as the first Black and Asian American vice president of the United States.

When asked about threats from Duckworth and Hirono to block nominees until there are more AAPI appointments, Biden said Tuesday night, “We have the most diverse Cabinet in history. We have a lot of Asian Americans that are in the Cabinet and in sub-Cabinet levels.”

Duckworth, who was under consideration for a Cabinet post, said she had worked for six months to put forward “well-qualified” AAPI nominees, but none “even got a phone call.”

“At this point, they can … call me and tell me what the proposal is,” she said. “But until then, I am a no vote on the floor on all non-diversity nominees. You know, I will vote for racial minorities and I will vote for LGBTQ, but anybody else, I’m not voting for.”

The Biden administration does have a historically diverse Cabinet — including the highest number of Latinos and the first Native American to hold a top post, but the group of 15 Cabinet officers is the first in 20 years of Republican and Democratic administrations not to include an Asian American Pacific Islander.

One Democratic senator — a member of leadership — voiced hope that the standoff would soon end.

“I think it is objectively true that in terms of the top Cabinet positions that the representation is not there. I think it’s also true that the White House wants to fix this,” said Sen. Brian Schatz, D-Hawaii. “So, I think we’re going to be able to come to a resolution on a going forward basis, and you know, I’ve talked to both Mazie and Tammy about it, and we’ve talked to the White House, and I think there’s goodwill here. And so I think this is going to land in a good place, but every senator has a right to vote how they see fit and this is an appropriate use of a senator’s power.”

‘Strange and inappropriate’: Flood victim says Cuomo came onto her in her home