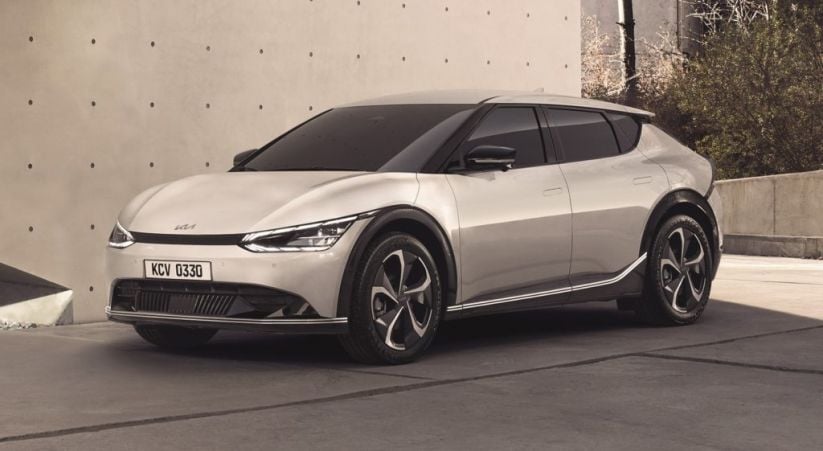 Kia new all-electric EV6 arrives in Irish showrooms this autumn, promising not just a family-sized plug-in crossover, but a high-performance version as well.

Built on the same new platform as its sister brand Hyundai’s upcoming Ioniq 5, the new EV6 is slightly longer and taller.

While there are obvious similarities between the cars given their common underpinnings, one way to consider the two cars is in comparison with arch-rival Volkswagen. Where the Hyundai Ioniq 5 is set to challenge the family hatchback VW ID.3, this Kia EV6 is targeting the more crossover-like ID.4.

Alongside being a rival to the VW ID.4 crossover, the Korean brand is promising something very spicy: a 585hp GT version capable of 0-100km/h in 3.5 seconds and a top speed of 260km/h.

The rear-wheel drive pairs the rear axle with a 160kW electric motor, while the all-wheel drive adds a further 70kW motor to the front axle.

For the high-performance version, those motors are replaced with a 160kW on the front axle and 270kW on the rear.

Kia promises real European driving flair from the new car and not just the usual electric car straightline speed. It credits the fact the EV6’s development included time spent in twists and turns of the famous Nurburgring.

Two interesting new features in the car include an active cruise control system, which taps into machine-learning technology to adapt its braking style to the way you normally drive.

A new vehicle-to-vehicle charging system (over V2V as they call it) lets you donate some of your battery charge to less fortunate electric car owners who have run out of power.

In design terms the EV6 measures in at 4.7 metres, with a wheelbase of 2.9 metres and bootspace of 520-1,300 litres, making it a sizeable family crossover, but it’s slightly lower to the ground than most of its rivals, giving drivers a slightly lower seating position than in the likes of the ID.4 or Tesla Model Y.
In keeping with its crossover claims, it can tow up to 1,600kgs in weight.

As it shares its powertrain and platform with the Hyundai Ioniq 5, that means it also features the same fast-charging systems. So it can take a charge from an operating voltage of 800 volts and when hooked up to a 350kW charger the battery power can increase from a 10 per cent charge to 80 per cent in just 18 minutes. Kia has done the maths on this and reckons you can get 100km of range out of the EV6 from this sort of charger in just 4 ½ minutes.

While this is certainly not Kia’s first electric car – its e-Niro and e-Soul models have been selling well in Ireland already – it’s the first car developed and built solely as an electric car. And it heralds a fleet of new cars. After this EV6 will come another six new all-electric models built on this e-GMP platform, along with four additional all-electric versions of existing models. In total Kia plans to offer 11 all-electric vehicles by 2026.

That commitment to sustainability features inside the car, where all “leather trim” will be made using vegan materials. Meanwhile, the interior also features recycle plastics – equivalent to 111 plastic water bottles.

Why the bad stuff sticks

Diversity’s Perri Kiely on bullying, growing up in the spotlight and online comments