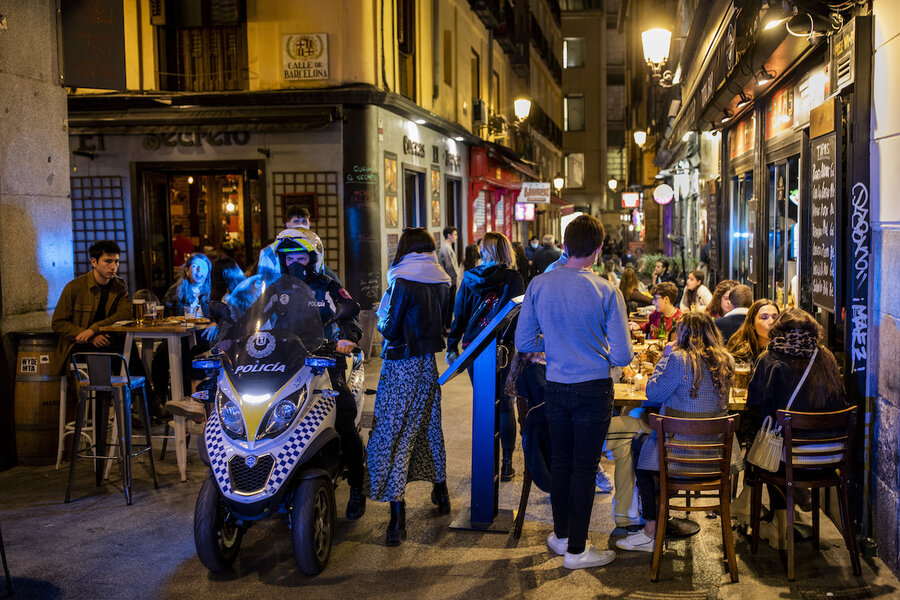 In Madrid, the real party starts at 11 p.m. after the bars close – and curfew kicks in.

That’s when young, polyglot groups of revelers from Italy, the Netherlands, Germany, and most noticeably, France, join their Spanish contemporaries in Old Madrid’s narrow streets to seek illicit fun. Most are in their early 20s, eager to party in the Spanish capital like they haven’t been able to do for months at home under strict lockdowns.

With its policy of open bars and restaurants – indoors and outdoors – and by keeping museums and theaters running even when outbreaks have strained hospitals, Madrid now has a reputation as an oasis of freedom in Europe’s desert of restrictions.

But as COVID-19 cases in the city continue to rise (while falling elsewhere in Spain), public health officials warn the pandemic costs may outweigh the economic benefits. According to El País, Madrid’s infection rates are worse than many other European capitals, such as Paris, Brussels and Rome, and far higher than Berlin’s.

Spain recently said it would extend a negative coronavirus test requirement in effect for arrivals by sea or air to include those entering from France by land. All tourists are told to wear masks and practice social distancing.

Other Spanish regions have a stricter approach to entertainment. Even sunny coastal resorts offer a limited range of options for the few visitors that started to arrive, coinciding with Easter week, amid a set of contradictory European travel rules.

“It’s a real privilege for me to go into bars because in France you can’t. Here I can go to restaurants, share time with friends outside of home, discover the city,” Romy Karel said. The Berliner flew to Madrid last Thursday from Bordeaux, the southern French city where she’s studying social sciences.

“I can’t remember when was the last time I did this,” she said.

The visitors are bringing some vital business to locals and giving politicians much to debate about before a polarized regional election. Isabel Díaz Ayuso, the regional president of Madrid who is running for reelection, is trying to attract votes beyond her conservative supporters by campaigning under the slogan of “freedom.”

Outside the capital, efforts to jumpstart tourism are drawing mixed results. In part, that’s due to a patchwork of rules at regional, national, and even European levels that curb domestic nonessential travel in many countries while leaving a loophole for those seeking a Spanish holiday.

Although Germany has banned all domestic tourism and discouraged travel abroad, the government allows trips to Spain’s Balearic Islands, which have a low infection rate. Bookings of flights and hotels followed even though many were disappointed to find on arrival that bars and restaurants were shut at night.

“In Germany, we have so many rules that coming here feels like freedom,” said Marius Hoffman shortly after he landed in the archipelago’s capital, Palma de Mallorca, this past weekend.

David Stock, another German traveler who visited Granada’s famed Alhambra complex this week, acknowledged the paradox of his government’s rules combined with Spain’s embracing of tourists.

“There are strange rules everywhere these days,” Mr. Stock said.

In France, hard-hit regions are curtailing free movement to a roughly six-mile radius from home. Together with the nationwide nighttime curfew and the total closure of bars and restaurants since last October, it’s proving too much for many, who look south for excitement.

France now accounts for one-fifth of all incoming flights to Madrid, while cellphone roaming data analysis has shown an increasing uptick of French mobiles in the Spanish capital since January – peaking around weekends.

When curfew begins, many of the fun-seekers head for underground gatherings advertised via messaging groups. Others recruit fellow party animals on their way back to their rented Airbnbs. Last weekend, police said they broke up more than 350 illegal parties, with some of the attendees hiding in closets or other “implausible” places.

Spain recently said it would extend a negative coronavirus test requirement in effect for arrivals by sea or air to include those entering from France by land.

Still, foreigners like Mr. Hoffman or Ms. Karel can fly direct from Munich or Bordeaux to beach resorts or cultural wonders in Spain, while Spaniards can’t travel across regions in the country to their second homes or visit relatives.

This rankles with many, such as Nuria López, a pastry shop owner in the Spanish capital.

“It’s unfair,” Ms. López said. “But it does help the economy in Madrid and we need that.”

Like her, many see the need to boost an industry that in 2019 accounted for 12.5% of Spain’s gross domestic product and employed nearly 13% of its workforce. The near-total halt of international travel, paired with last year’s first uncompromising lockdown, meant that the economy shrank 10.8% in 2020, the biggest drop since the Spanish Civil War in the 1930s.

So even as hospitals filled once again after Christmas, politicians resisted the pressure to follow other European countries in ordering full stay-at-home orders, closing schools, or most businesses.

Pablo Díaz, a tourism expert with the Barcelona-based UOC university, said pandemic fatigue, especially among younger generations, and a lack of a common European policy have meant that “tourism has found ways to establish direct corridors in an organic way where the supply and demand meet.”

The uptick in bookings ahead of Easter week, he said, “has been like a breath of fresh air for tourism.”

“But that doesn’t mean that the industry is going to come out of ICU any time soon,” he added.