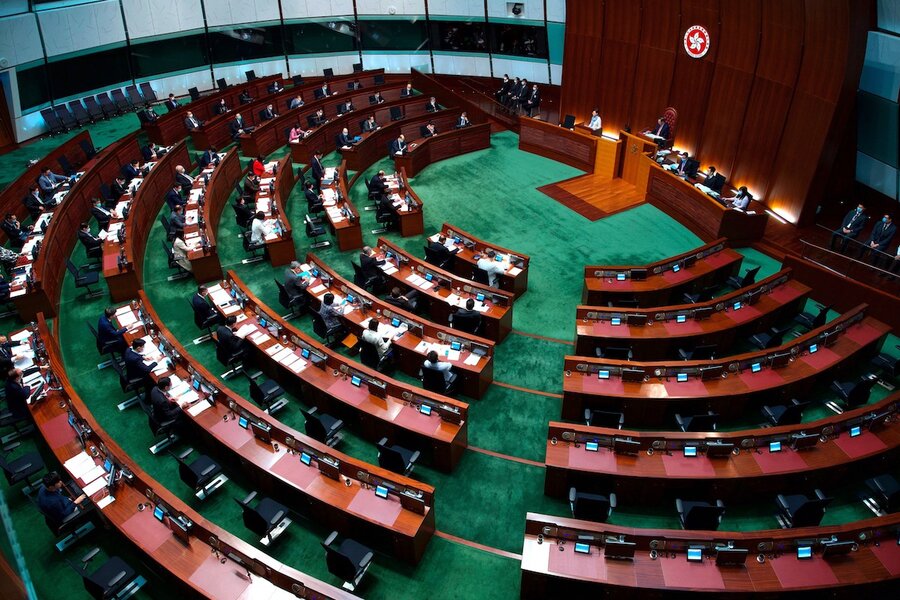 China has sharply reduced the number of directly elected seats in Hong Kong’s legislature in a setback for the territory’s already beleaguered democracy movement.

The changes were announced Tuesday after a two-day meeting of China’s top legislature.

The legislature will be expanded to 90 seats, and only 20 will be elected by the public. Currently, half of the 70-seat legislature – 35 seats – is directly elected.

The move is part of a two-phase effort to rein in political protest and opposition in Hong Kong, which is part of China but has had a more liberal political system as a former British colony. China imposed a national security law on Hong Kong last year and is following up this year with a revamp of the electoral process.

The crackdown comes in the wake of months of pro-democracy protests in 2019 that brought hundreds of thousands to the streets and turned violent as the government resisted the movement’s demands.

“They are going to get rid of opposition voices because under this new system, which is so oppressive and restrictive, I don’t think any self-respecting individual will want to take part,” Ms. Lau said.

China’s top legislature, the Standing Committee of the National People’s Congress, amended Hong Kong’s constitution to pave the way for the changes. The Hong Kong government is now tasked with revising its electoral laws and holding an election.

In the current 70-member legislature, voters elect half the members and the other half are chosen by constituencies representing various professions and interest groups. Many of the constituencies lean pro-Beijing, ensuring that wing a majority in the legislature.

The new body will have 20 elected members, 30 chosen by the constituencies, and 40 by an Election Committee which also chooses the city’s leader.

The committee, which will be expanded from 1,200 to 1,500 members, is dominated by supporters of the central government in Beijing.

A new separate body will also be established to review the qualifications of candidates for office in Hong Kong to ensure the city is governed by “patriots,” in the language of the central government.

The full National People’s Congress rubber-stamped a proposal in mid-March that authorized the Standing Committee to amend the Basic Law, the constitution that has governed Hong Kong since the former British colony was handed over to China in 1997 under a “one country, two systems” framework that promised it semi-autonomy for 50 years.

Hong Kong leader Carrie Lam said at a news conference Tuesday that the new committee to vet candidates will consist of a few government officials who are also trusted by the central government.

Ms. Lam dismissed concerns that the changes will affect plans for the city to achieve universal suffrage and allow residents to vote for their leader.

“I may as well say this very categorically that the central government is very sincere to give Hong Kong people so-called more democracy, that is, universal suffrage,” Ms. Lam said.

She blamed pro-democracy lawmakers for objecting in 2014 to a proposal that would have allowed residents to vote for the chief executive on the condition that Beijing would vet the candidates.

“As we move ahead with the current set of improvements in place, then in accordance with Hong Kong’s actual situation and in an orderly and gradual manner … I’m quite certain that we will still have universal suffrage in selecting the chief executive,” she said.

“We just need to act in concert, and make sure that we are not moving away from this very fundamental concept of ‘one country, two systems,’” she said.

The political opposition in Hong Kong – which has sought more democracy – sees the changes as part of a broader effort to keep them out of office.

Mr. Lo said members of the Democratic Party are still discussing whether they plan to run for election.

“All those changes will affect how we discuss and affect how our party members think about the election system, and whether or not we will fun for election in the future,” he said.

In part, it comes down to the definition of patriots. The opposition tried to block legislation by filibustering a key legislative committee for months and disrupting legislative proceedings.

Beijing, which prioritizes political stability, sees these actions as interfering with the governing of Hong Kong and wants to keep these actors out of government.

A statement by Beijing’s Hong Kong and Macau Affairs Office said the Hong Kong national security law provided a solid legal foundation to safeguard national security and that the electoral reforms provide a “solid institutional guarantee” of the city’s “one country, two systems” framework and ensure that only “patriots” rule Hong Kong.

The statement also said that with the electoral changes, the relationship between the city’s leader and the legislature will be smoother, and the “various deep-seated contradictions and problems that have plagued Hong Kong for a long time” will be more effectively resolved.