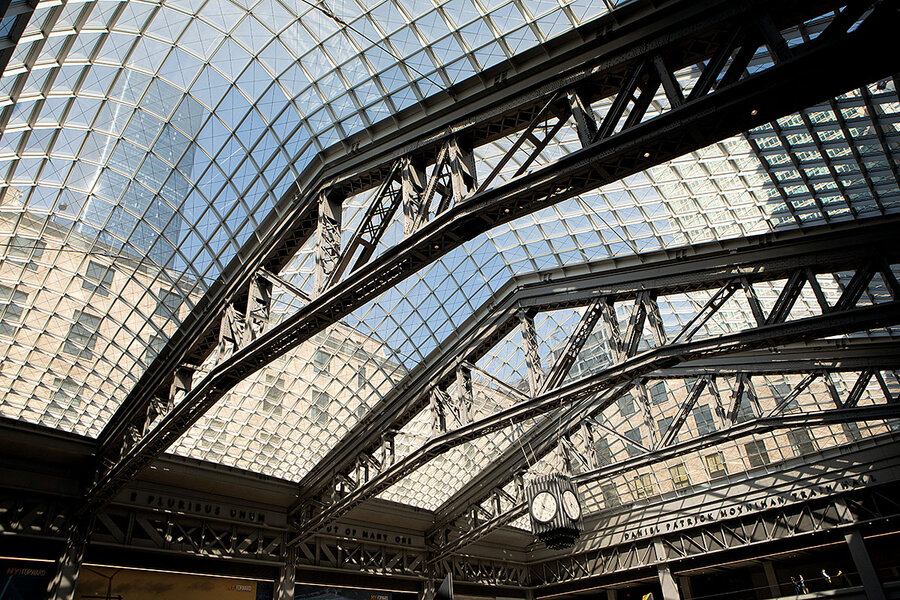 Addisalem Zimbi has worked at a food kiosk in the Moynihan Train Hall every morning since it opened on Jan. 1. Three months later, she is still awed by its architecture. And she’s not the only one. Travelers emerge into the sun-filled atrium with surprised looks. “Some people didn’t even know about it. They are shocked and are like, ‘Where am I?’” says Ms. Zimbi, laughing.

The idea to transform the mail-sorting hall of the James A. Farley Post Office, originally designed by McKim, Mead & White in 1914, into an extension of the overcrowded Pennsylvania Station was first proposed by U.S. Sen. Daniel Patrick Moynihan in the 1990s. After years of wrangling, development began in 2016. It opened ahead of schedule, in the middle of a pandemic, to a subdued city.

The $1.6 billion hall, designed by Skidmore, Owings & Merrill, is a marvel of steel, glass, and marble, complete with art installations. A stained-glass triptych by Kehinde Wiley, which features break dancers leaping over the heads of unsuspecting passersby below, evokes Michelangelo’s “The Creation of Adam.” “The Hive,” an upside-down cityscape by Elmgreen & Dragset, is equally arresting. A retro-style waiting area, with cozy curved booths, features nine reconstructed photographs of the original Penn Station (demolished in the 1960s) by Stan Douglas. And the centerpiece: the sun shining through a 92-foot-high vaulted skylight, glinting off century-old steel trusses.

In New York’s new Moynihan Train Hall, travelers find splendor, whimsy, and even a bit of awe, adding credence to the idea that the journey can be as inspiring as the destination.

For all its splendor, the facility does not yet solve Penn Station’s overcrowding in normal times. For now, it serves only Amtrak and Long Island Rail Road passengers.

Yourina Janvier, a security guard, appreciates the hall’s beauty, but hopes for more. “If they can do this here, then they can do it over there too,” she says, gesturing toward the busier side of Penn Station.

We’ve been experimenting with the presentation of our photo essays online and in the Monitor Daily. What do you think? Share feedback with the photo team at [email protected]

In Pictures: Standing outside and looking in