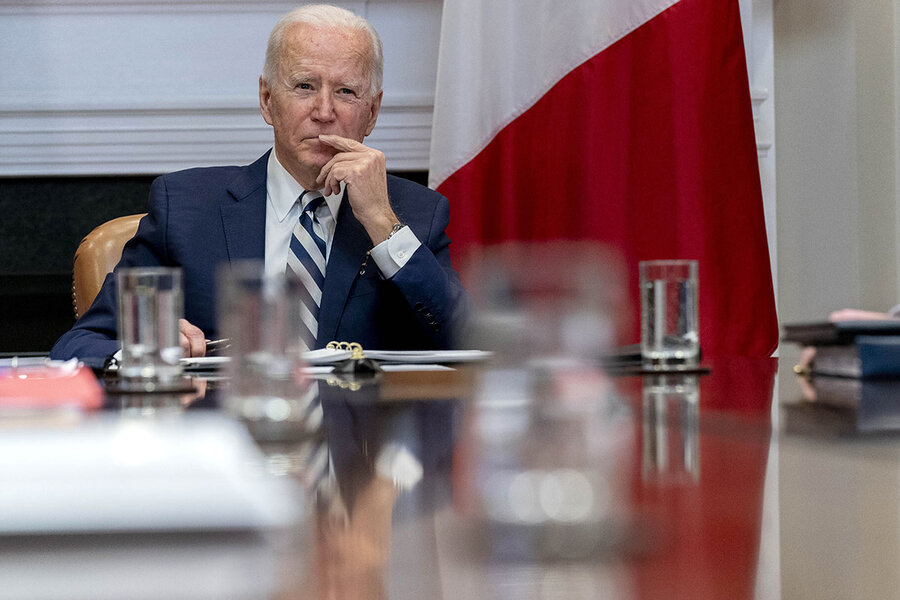 “I predict to you [that] your children or grandchildren are going to be doing their doctoral thesis on the issue of who succeeded, autocracy or democracy, because that is what is at stake,” Mr. Biden replied to a question on competing with China at his first White House press conference on Thursday.

Adding that China’s heavy investment in new technologies and infrastructure both at home and abroad underscore how its intention is to “own” the future, Mr. Biden said it is up to the U.S. and allied democracies to demonstrate the utility and superiority of their system.

By “we” Mr. Biden says he means America and its like-minded allies – a point he emphasized at his press conference by noting he would take up the autocracy-democracy challenge later the same day in a virtual summit with the leaders of the 27-member European Union.

Yet as willing as European allies may be to join with the U.S. when it means broadly asserting Western values, analysts of transatlantic relations say, there is still “wariness” about engaging in a Cold War-type ideological battle. That reluctance has been even stronger, they add, at any suggestion of extending the battle to the economic arena.

At least until very recently.

As China has shown a growing willingness to extend to Europe the brand of coercive economic diplomacy it has honed in less-powerful developing countries, European leaders and policymakers appear to be awakening to the realization that economics will be inseparable from the broader ideological struggle with an autocratic China.

“In Europe they’d like to keep things clean and neat, pursuing deeper trade with China while maintaining their principles and the norms of the international system, but they’re finding that things don’t stay neat and separate like that,” says Heather Conley, director of the Europe, Russia, and Eurasia Program at the Center for Strategic and International Studies in Washington.

America’s European allies are comfortable uniting to support Western principles such as democratic governance, others say, but far less enthusiastic about framing that promotion in the confrontational terms of a new cold war.

“On the European side, there’s a strong sense that the values piece of this question of dealing with China, and even some systemic reordering of relations based on values, is something that has to be signed up to … and coordinated” with the U.S., says Andrew Small, a senior transatlantic fellow in the Asia Program at the German Marshall Fund of the United States in Berlin.

“But there is a degree of trepidation about the framing of this, and caution on Europe’s part about anything that looks excessively confrontational,” he adds. The Europeans “are not willing to see this turn into another cold war, or something so adversarial that it rules out the two sides working together.”

Indeed, America’s European partners – and perhaps none more than Germany – resisted the growing suggestions over the four years of the Trump presidency of a dawning geopolitical battle that would once again put Europe at the center of a fight with powers like China and Russia.

“They have the memory of the Cold War and they don’t want to once again be the terrain where two great powers struggle for superiority,” says Ms. Conley. “They want to preserve the room to maneuver independently.”

But at the same time, China’s recent willingness to employ its growing assertiveness toward Europe has prompted a growing openness to some European version of taking on China, Mr. Small says.

Until very recently, America’s European allies have been even less enthused about any actions that might upend the EU’s critical trading relations with China and economic ties more broadly.

Indeed, the EU in December finalized an as-yet unratified trade and investment deal with China, even as the Trump administration was imposing sanctions and other punitive measures on Beijing over everything from Hong Kong and treatment of China’s Uyghurs to alleged economic espionage in the U.S.

Blinken: No need to choose

Secretary of State Antony Blinken appeared to acknowledge Europe’s aversion to any generational confrontation with China – and the reality of a global economy where China is too big to simply ignore – when he reassured allies during a trip to Brussels last week that they would not have to choose between the U.S. and China.

The U.S. “won’t force allies into an ‘us-or-them’ choice with China,” Mr. Blinken said at NATO headquarters. Adding that “countries can work with China where possible” on issues such as climate change, he echoed the Biden administration’s “compete, cooperate where we can, and confront when we must” approach to China that broadly mirrors the EU’s own policy statement on China.

But European perceptions of China have shifted dramatically just in recent months, analysts say. And that shift has come not because there’s a new U.S. president calling for a robust transatlantic response to an autocratic China, but because China in recent weeks has shown Europe its authoritarian and imperious side.

For example, the Chinese government has sanctioned senior European parliamentarians and European nongovernmental organizations and think tanks that dared to condemn the use of forced labor in China’s western Xinjiang province to harvest cotton for garments and other products destined for Europe. Moreover, China has in recent days encouraged consumer boycotts of European fashion brands that voice concerns over reports of forced labor in cotton production in Xinjiang. It had previously threatened to retaliate against European companies in China that acted on human rights concerns raised by European governments.

“More people are coming to realize they’re going to have to make some choices concerning China,” says Mr. Small, who is also associate senior policy fellow in Europe-China relations at the European Council on Foreign Relations in Brussels.

As China sanctions European officials and targets companies like the giant Swedish retailer H&M, “another question becomes, ‘Are these big choices really being placed on us by the U.S., or in fact more by China in the way it is framing these issues?’” he adds.

As China ramps up promotion of its development and governance model on a global scale, the question for some analysts is no longer if the Western democracies will unite to challenge China, but how extensive the united front will be.

Or it could “go deep,” he adds, which would mean much greater coordination among Western allies, including Japan, of supply chains; tech norms and development in areas like data sharing, artificial intelligence, and privacy; and perhaps even some alternative from the democracies to China’s Belt and Road infrastructure development initiative, as President Biden has proposed.

One factor that analysts say will determine the choices America’s allies make will be just how reliable a partner they see in Washington, which after decades of steadfast leadership has more recently seesawed between internationalist and more nationalist policies and outlooks.

The Western democracies’ battle with China “is going to require some choices in Europe, but it will also require a steadiness from the U.S.,” says Ms. Conley. “The allies can’t be expected to buy into a U.S.-led ideological battle if in Washington the pendulum is swinging every four years.”

Chauvin trial: Why Minneapolis activists are looking beyond the verdict