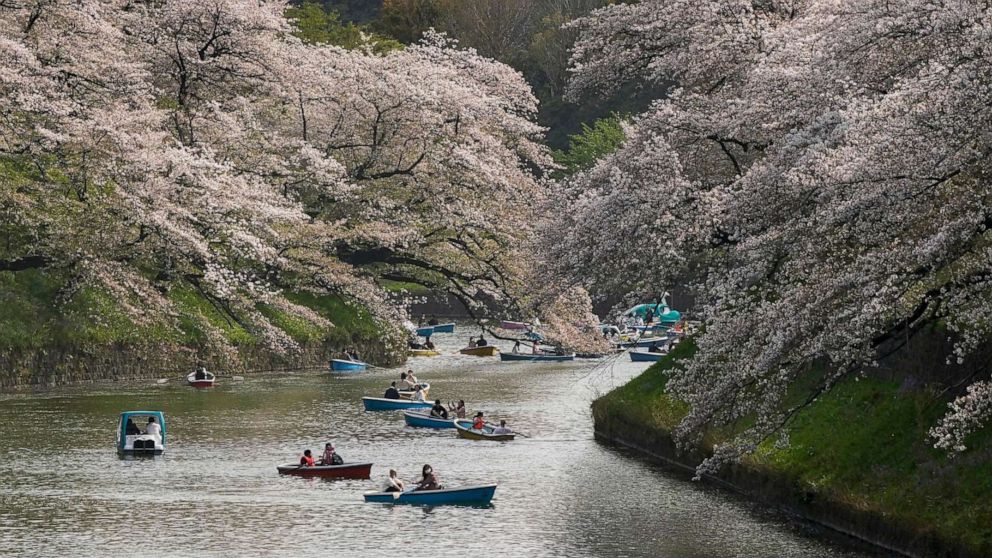 Climate change may be causing cherry blossom trees around the world to blossom much earlier than they had in the past.

The famous blossoms in Kyoto, Japan, peaked on March 26, the earliest date in 1,200 years, according to data collected by Osaka University.

The flowerings have been occurring earlier and earlier in recent decades, according to the records, which go back to 812 AD in imperial court documents and diaries.

The previous record was set in 1409, when the cherry blossom season reached its peak on March 27.

The emergence of the blossoms is often a sign that spring is in full bloom. Kyoto has experienced an unusually warm spring this season.

The average temperature for March in Kyoto has climbed from 47.5 degrees Fahrenheit in 1953 to 51.1 degrees Fahrenheit in 2020, according to the Japan Meteorological Agency. Japan’s national newspaper Mainichi reported Wednesday that decreased human activity stemming from the COVID-19 pandemic did not decrease carbon dioxide levels in surrounding areas and that carbon dioxide levels in Japan continued to rise in 2020.

While the blossoms, or “sakura” in Japanese, only last a few days, their bloom is of cultural and economic significance in Japan. Friends and family get together to see them and social media becomes flooded with images of cherry blossoms.

The data set for cherry blossom season in Japan is especially valuable because it goes back so far.

“In Kyoto, records of the timing of celebrations of cherry blossom festivals going back to the 9th Century reconstruct the past climate and demonstrate the local increase in temperature associated with global warming and urbanization,” according to a 2009 paper published in the scientific journal Biological Conservation.

The data suggest the peak blooming date in Kyoto has gradually been moving from mid-April to the beginning of the month.

The data collected by the Japan Meteorological Agency since 1953 also shows that the record for the earliest peak of cherry blossoms was set in Kyoto and in more than a dozen other cities, The Associated Press reported.

“We can say it’s most likely because of the impact of the global warming,” Shunji Anbe, an official at the observations division at the Japan Meteorological Agency, told the AP.

Earlier blooming has occurred in Washington, D.C., where cherry blossoms reached their peak on March 20, according to the city’s Cherry Blossom Watch.

The legacy of the trees goes back to 1912 when more than 3,000 trees were presented as a gift from the mayor of Tokyo. Today, the trees are meant to symbolize the friendship between Japan and the U.S.