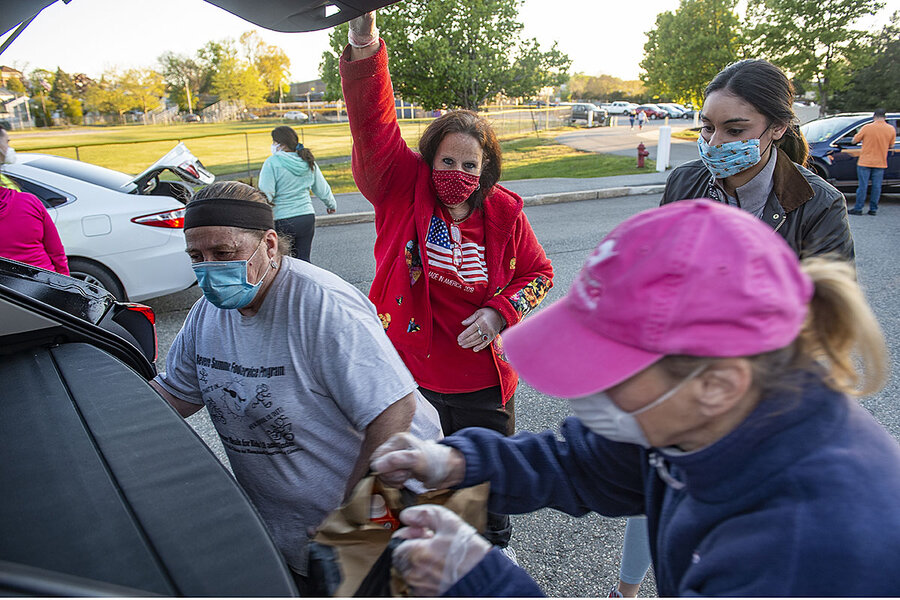 Before the pandemic, rates of food insecurity in the United States had been declining during the longest economic expansion in the country’s history. The percentage of households that were food insecure for at least some portion of the year had dropped from 14.9% in 2011 to 10.5% in 2019, according to the U.S. Department of Agriculture (USDA).

But within those households, that still represented 35.2 million Americans worried about a low-quality diet or even when they would get their next meal.

And now, over the past year, the pandemic has multiplied the number of people who face food insecurity in some way.

The pandemic has increased the number of people facing food insecurity in the U.S. Yet it has also prompted heightened awareness of the problem and opened new doors toward solutions. First in a series on hunger in America.

Beyond hunger itself, researchers say the ripple effects can range from poorer health to challenges for children with school or emotional development.

Yet the U.S. produces more than enough food for everyone – raising questions about why the problem is so persistent and what can be done to address it.

Why are so many people food insecure?

Food insecurity is a complex problem, and commonly viewed as one that is mainly borne by people living in poverty. But although it’s often intricately linked to poverty, they are two different things, says Chris Barrett, an agricultural economist at Cornell University.

“So the mapping between food security and poverty – where poverty here means low income – is imperfect because ultimately they’re both getting at the core idea of what is people’s quality of life,” says Dr. Barrett. “And if you think about what defines someone’s quality of life, well, it’s defined by a lot of different things.”

The pandemic has thrown many more Americans into precarious situations, where their income or work opportunities are reduced – and perhaps also their access to family, social networks, community organizations, shops, and transportation.

Who is hungry in the United States today?

In a census survey in March, nearly 18 million people reported “sometimes” not having enough food to eat, and 5 million said they “often” didn’t have enough.

That combined total of 23 million – 1 in 14 Americans – is for just a two-week period in March, representing a huge increase. (The USDA’s pre-pandemic figure of 35 million was for people affected at some point during an entire year.)

As unemployment surged to 14.7% in April last year, demand at food banks also jumped across the country. A Pew Research Center survey found that about 17% of Americans have gotten food from a food bank. Researchers at Northwestern University estimated that food insecurity more than doubled during the pandemic, affecting up to 23% of all households. Although unemployment has diminished since last spring, census surveys continue to show high levels of food insecurity.

What is being done to tackle food insecurity?

In the U.S., three federal nutrition assistance programs address the issue: the Supplemental Nutrition Assistance Program (SNAP), the National School Lunch Program, and the Special Supplemental Nutrition Program for Women, Infants, and Children (WIC). According to the USDA, 58% of food-insecure households participated in one or more of the three federal programs in the month prior to December 2019.

SNAP, which used to be known as the Food Stamp Program, is the largest and also one of the most vital nutrition assistance programs for low-income Americans. Eligible households receive an electronic benefit transfer card that they can use to buy food. According to the Center on Budget and Policy Priorities, 38 million people used SNAP in 2019 – that’s 1 in 9 people. Numbers are expected to be higher during the pandemic; preliminary data showed that the number of Americans receiving SNAP benefits was 14.9% higher in April 2020 than in April 2019.

For food-insecure children, the National School Lunch Program enabled free or reduced-price meals in 2019 for an average of 29.6 million children each school day. And the WIC program served an average of 6.4 million low-income women, infants, and children under the age of 5 every month in 2019.

Apart from the federal programs, other core resources for food-insecure people are food banks and pantries.

How has the pandemic affected responses to food insecurity?

At the federal level, emergency policies were put into place, such as increased funding for SNAP and allowing the benefits to be used for online grocery shopping. Other initiatives include the Farmers to Families Food Box Program (to purchase and distribute agricultural products to food banks and nonprofits) and the pandemic electronic benefit transfer (P-EBT), which provides families with vouchers to purchase groceries to replace lost school meals when school buildings were closed.

The pandemic has also caused the private sector, nonprofits, and individuals to find new solutions or rethink approaches to these challenges – and there is potential for some of these changes to stay beyond the pandemic.

“There’s been a huge enhancement of awareness around the private food assistance systems,” says Dr. Barrett. “That’s really awakened people to how close … many of our neighbors are to the margin. … Many in the food bank and food pantry system have seen an increase in donations, and more people wanting to volunteer.”

Indeed, across the country, communities have stepped in to plug the gaps, mobilizing to support their residents with grassroots solutions like community fridges and mutual aid initiatives.

“The increased awareness, I think, will pay off over time in helping people who have depended on that system get back on their feet,” says Dr. Barrett.

The turbulent ride of post-church America

Jessica Walter, star of ‘Arrested Development’ and ‘Archer,’ dies at 80