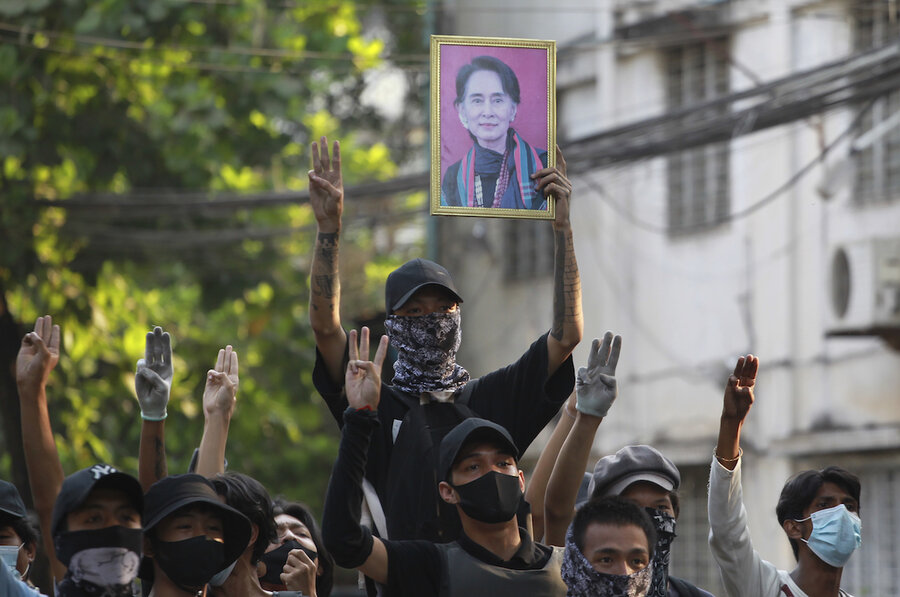 A group of opponents of Myanmar’s military government declared the country’s 2008 constitution void and put forward an interim replacement charter late Wednesday in a major political challenge to the ruling junta.

The actions were taken by the Committee Representing Pyidaungsu Hluttaw (CRPH), an underground, self-styled alternative government established by elected lawmakers who were not allowed to take their seats when the military staged the coup in February and ousted and detained civilian leader Aung San Suu Kyi. The CRPH, which represents the National Parliament, made the announcements on social media.

The moves, while more symbolic than practical, could help woo the armed ethnic militias in the countryside to ally themselves with the mass protest movement against the military’s seizure of power in February.

The 2008 constitution, implemented under army rule, ensured the military maintained its dominance during the country’s decade of progress toward democracy, such as by reserving it a quarter of the seats in Parliament and retaining responsibility for state security. The junta that seized power from the civilian government Feb. 1 cites emergency provisions in the charter as giving its takeover constitutional legitimacy.

The CRPH presented a Federal Democracy Charter as an interim constitution. It aims to end Myanmar’s long history of military dictatorship as well as meeting the longstanding demands of its myriad ethnic minority groups for greater autonomy in their regions.

The proposals are politically significant because the protest movement against military rule has been seeking an alliance with the armed ethnic minority groups and would like them to form a federal army as a counterweight to the government armed forces.

Largely peaceful demonstrators in cities and towns have been facing armed police and soldiers. At least 536 protesters and bystanders have been killed since the coup, according to Myanmar’s Assistance Association for Political Prisoners, which counts those it can document and says the actual toll is likely much higher.

The CRPH has sought to be recognized as Myanmar’s sole legitimate government body. Foreign governments and international organizations have not yet granted it formal status, but some have acknowledged it as a stakeholder that must at least be consulted. The junta has declared it treasonous.

At a United Nations Security Council meeting the U.N. special envoy for Myanmar, Christine Schraner Burgener, painted a dire picture of the military crackdown and what could happen if it escalates. She urged the Security Council to “prevent a multidimensional catastrophe in the heart of Asia.”

China, a permanent Security Council member with veto power, has called for dialogue previously, but Ms. Schraner Burgener noted the junta has limited engagement with the outside world. “If we wait only for when they are ready to talk,” she said, “a bloodbath is imminent.”

Myanmar’s junta announced earlier Wednesday it is implementing a unilateral one-month ceasefire, but made an exception for actions that disrupt the government’s security and administrative operations – a clear reference to the movement that has held protests against it daily.

The protest movement focuses on civil disobedience, including work stoppages. Medical staff and railway workers have been among those involved and have been targeted by security forces in response.

Several of the major groups – including the Kachin in the north, the Karen in the east, and the Rakhines’ Arakan Army in western Myanmar – have publicly denounced the coup and have said they will defend protesters in the territory they control.

The Kachin Independence Army, the armed wing of the Kachin Independence Organization, attacked a police station in Kachin state’s Shwegu township before dawn Wednesday, according to local news outlets The 74 Media and Bhamo Platform. The attackers were reported to have seized weapons and supplies and wounded one police officer.

The Kachin have staged a series of attacks on government forces in their territory since the coup, saying the latest round of fighting was triggered by government assaults on four Kachin outposts. After one Kachin assault in mid-March, the military retaliated with a helicopter attack on a Kachin base.

Wednesday’s Kachin attack came after fresh conflict in eastern Myanmar, where Karen guerrillas seized an army outpost Saturday. Myanmar’s military followed with airstrikes through Wednesday that killed at least 13 villagers and drove thousands more across the border into Thailand, according to the Free Burma Rangers, an established humanitarian group that provides medical assistance to the area’s villagers.

The conflict in eastern Myanmar spread the crisis to neighboring Thailand, where an estimated 3,000 Karen took temporary shelter. Most had returned by Wednesday.

Meanwhile, an outside visitor was able to see Ms. Aung San Suu Kyi, the ousted civilian leader, for the first time since she was detained during the coup. She spoke by video link with one of her lawyers, Min Min Soe, according to the online news site The Irrawaddy.

Ms. Aung San Suu Kyi, who is thought to be held somewhere in the capital, Naypyitaw, has been detained on several minor criminal charges, and the army said it is investigating more serious allegations of corruption against her. Her supporters dismiss the legal actions as politically motivated, aimed at discrediting her and preventing her from returning to the political arena, where she is the country’s most popular figure.

“She is in good health,” said her lawyer, according to the report. “she even urged us to stay healthy. She was smiling and looked relaxed.”

An unconfirmed report late Wednesday by the online news service Khit Thit Media said the government has filed six serious new charges against her, including treason and corruption, but as of Wednesday night, there was no official announcement.

How Beijing is tightening its grip on Hong Kong’s legislature