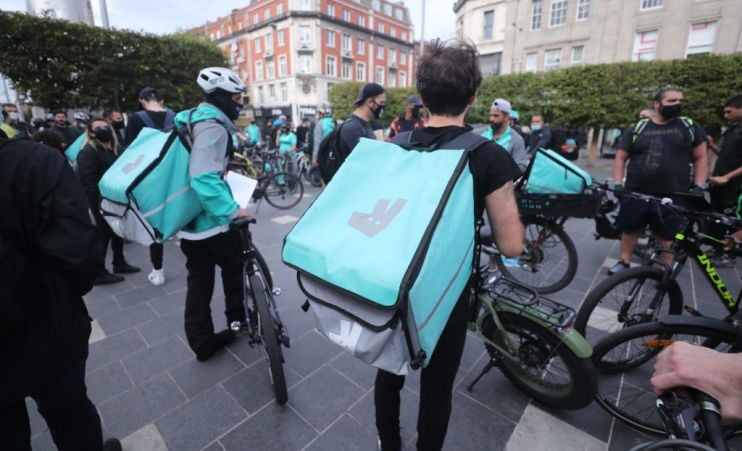 Billions were wiped off the value of the takeaway delivery firm on its first day of trading. Photo: PA

Shares in Deliveroo closed down 26.3 per cent on its first day of trading on the London Stock Exchange, having earlier seen falls of 30 per cent during its highly-anticipated launch.

Around £2 billion (€2.35 billion) was wiped off the value of the takeaway delivery firm as City traders balked at the flotation.

The company opened trading below 270p per share, having said it would launch its shares as a publicly-listed firm at 390p earlier on Wednesday morning.

Prior to trading, Deliveroo had also confirmed that it would be valued at around £7.6 billion, at the bottom of its previously announced range of between £7.6 billion and £8.8 billion.

However, this sank sharply from 8am as City analysts raised further concerns about the business.

🔔 Today is Deliveroo’s first day as a publicly traded company 🔔
And while the ringing of the stock exchange bell sounds pretty amazing, these are the bells that sound the sweetest to us…#DeliverooIPO pic.twitter.com/yGnAXbPwud

The cold opening to trading, which did not recover, came after a number of leading UK fund managers said they would reject the listing amid concerns over workers’ rights issues and its shareholder structure.

Danni Hewson, financial analyst at AJ Bell, said: “Anyone thinking Deliveroo might rise phoenix like from the flames at the end of its first day of trading will be sorely disappointed.”

She added: “Deliveroo is not the first company to experience a rocky start.

“Uber stocks fell more than 7 per cent on its debut but, if you’d kept your nerve, you’d be up 20 per cent today.

“Facebook had a torrid year or so as a listed business but if you’d hung on from those initial lows your investment would be up by more than 10-fold today.”

The company said it would raise around £1 billion through selling shares to new investors, with a further £500 million worth of shares to be sold to existing backers.

Deliveroo said it plans to invest the funds into continuing its growth trajectory and fuelling its innovation efforts.

Will Shu, founder and chief executive, said: “I am very proud that Deliveroo is going public in London, our home.

“As we reach this milestone I want to thank everyone who has helped to build Deliveroo into the company it is today, in particular our restaurants and grocers, riders and customers.

“In this next phase of our journey as a public company we will continue to invest in the innovations that help restaurants and grocers to grow their businesses, to bring customers more choice than ever before, and to provide riders with more work.

“Our aim is to build the definitive online food company and we’re very excited about the future ahead.”

Last week, some of the UK’s largest fund managers, including Legal & General and Aviva, said they would reject the flotation, highlighting issues related to its business model, workers’ rights and regulatory concerns.

Firms have also raised concerns over the share structure, which will see Mr Shu have 20 votes per share, compared with one per share for other investors, giving him a majority position at shareholder votes.