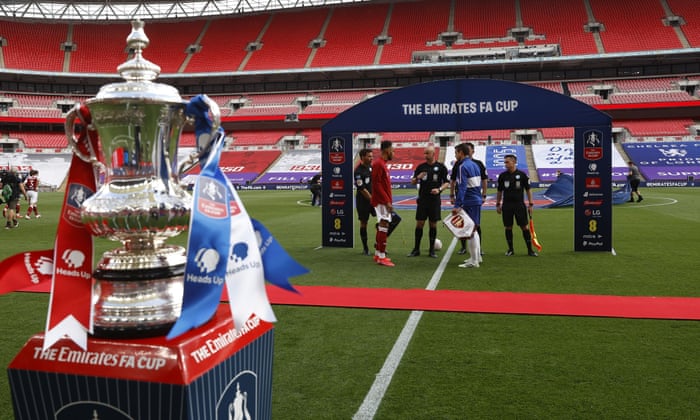 Boris Johnson has given firm backing to the use of Covid passports with pilots for large events planned for this month.

Johnson, who has faced criticism from his own party over the proposed use of Covid certification in small venues such as pubs and restaurants, has noticeably warmed to the idea in recent weeks.

Government sources have suggested the certificates could be used by businesses as a way to relax social distancing measures inside venues. An interim report into the measure is due to be published on Monday but local residents near Wembley have already been invited to apply for tickets to attend the FA Cup semi-final on 18 April between Leicester and Southampton.

Brent council said each attender had to return a negative lateral flow Covid-19 test 24 hours before attending the game and show proof to gain entry. They will also need to take a PCR home test after the event.

Speaking on a visit to Middlesbrough, Johnson said a certificate could be used to prove a person was safe in a number of different ways – not just vaccination. He suggested businesses would welcome the idea.

On Thursday, Keir Starmer expressed scepticism about the idea, saying the “British instinct” could be against them.

In an interview with the Daily Telegraph, he said he would not make any formal decision before studying government proposals, and talked up the need for cross-party consensus.

“I think this is really difficult and I’m not going to pretend there’s a clear black and white, yes/no easy answer on this. It is extremely difficult,” Starmer said.

But while he said the idea of vaccination certificates for international travel appeared inevitable, he suggested public opinion was likely to be against the idea of a domestic version.

“My instinct is that … [if] we get the virus properly under control, the death rates are near zero, hospital admissions very, very low, that the British instinct in those circumstances will be against vaccine passports,” Starmer said.

While his stance remains far from categorical, it will buoy libertarian-minded Conservative MPs, who will hope that if Labour opposes domestic vaccine passports the idea could be defeated in parliament. The Liberal Democrats have already said they will vote against them.

Michael Gove, the Cabinet Office minister, who is leading deliberations on the policy, met a series of MPs this week before the publication of the interim findings of the panel on vaccine passports, which is due on Monday. As well as the FA Cup semi-final there will also be a pilot on 25 April at the Carabao Cup final between Manchester City and Tottenham which is set to have a limited number of fans of the clubs.

Gove is generally seen as a strong supporter of the Covid passport scheme. But officials and ministers are said to be divided between whether the certification should apply only to mass events, for which there is broad support, or additionally to smaller venues, which is more controversial.

The plan is to make the certification available on a modified NHS app, which would detail whether a person has had a vaccination, or a recent test, or has antibodies to the virus, having previously tested positive.

Another aspect of the plan being considered is whether making vaccination a condition for pub entry could boost vaccination rates among younger people, when the programme moves to offer them jabs in the coming months.

Israeli elections: Trump no longer the centerpiece of Netanyahu’s bid for power