I've always loved listening to music, but I've never had a music center. Here's a paradox. At that time, when everyone was buying music centers, I bought my first PC, connected an amplifier to it, picked up CDs from friends, relatives, and acquaintances. A lot of music appeared on the computer, the need for a music center practically disappeared. The only thing missing was a receiver and a remote control.


Now the music center is not as relevant as it used to be. Almost no one arranges noisy discos at home for holidays such as a birthday. They mainly listen to music using portable wireless speakers and headphones. They buy active acoustics for the TV at most.
This “musical center” I collected for the dacha, for my father's birthday. In fact, one sleepless night was spent assembling.
The basis of the music center car radio, purchased by ad. 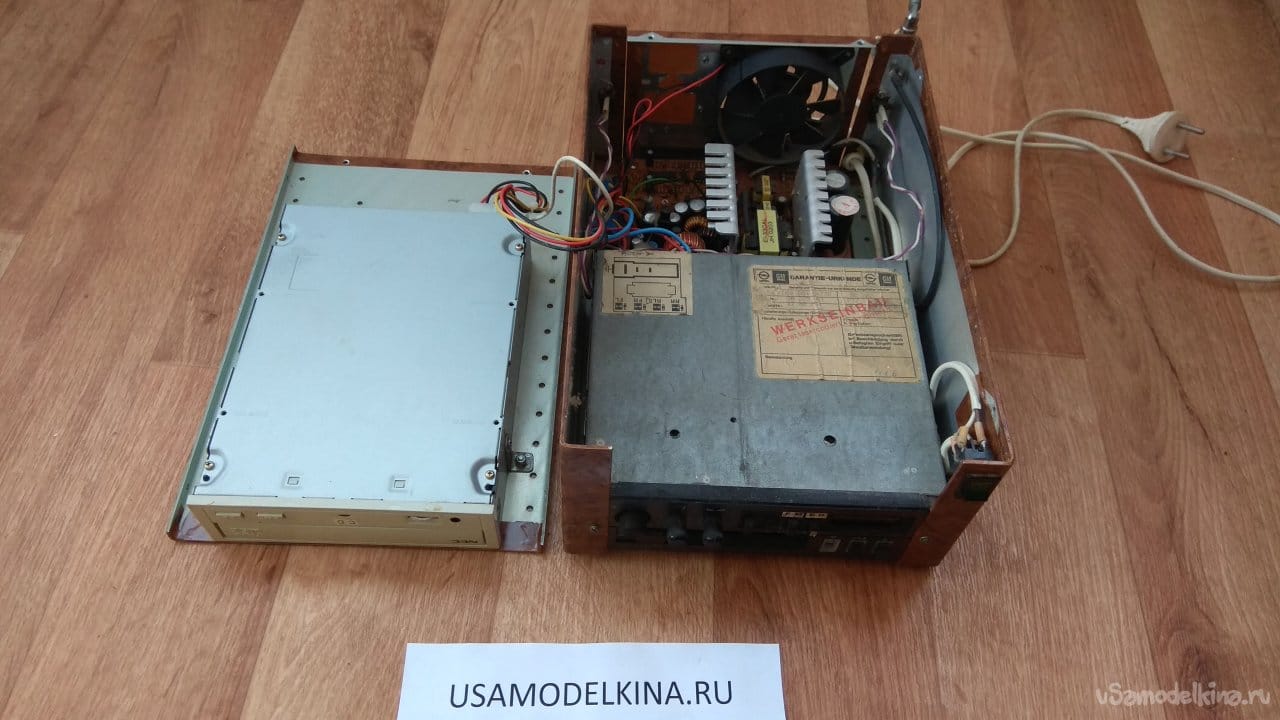 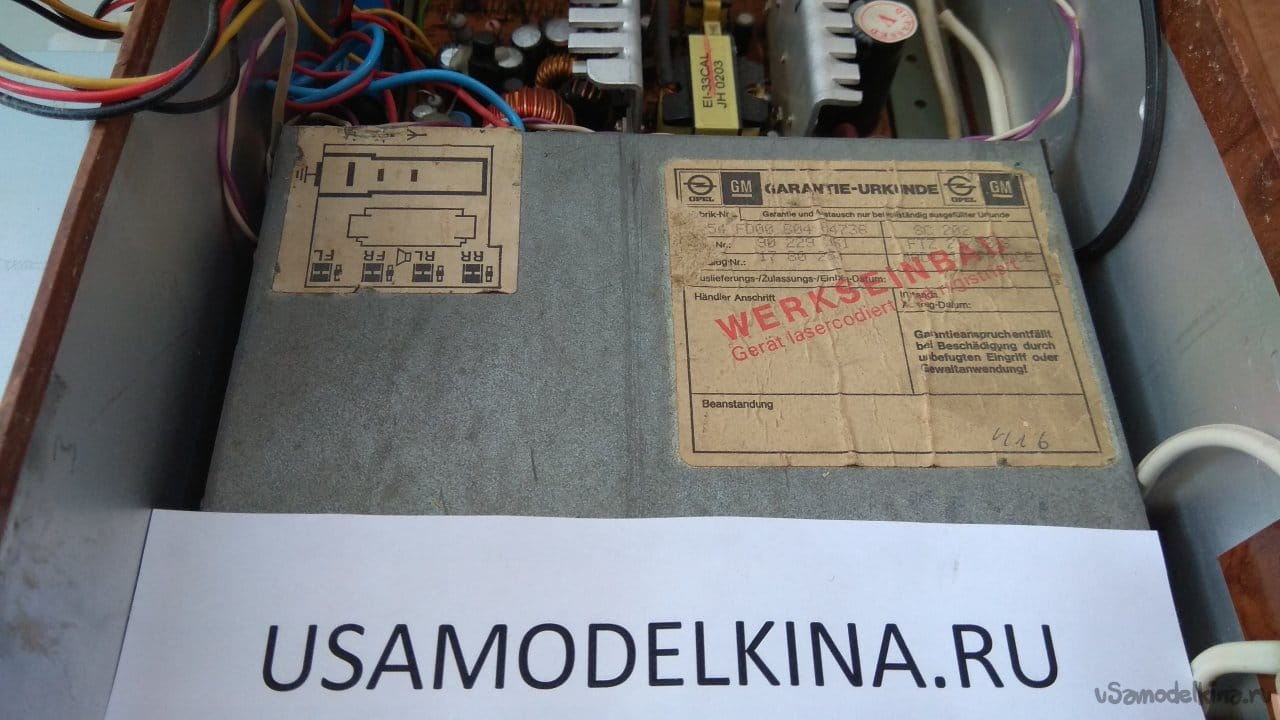 A new CD drive with buttons was purchased to play CDs. 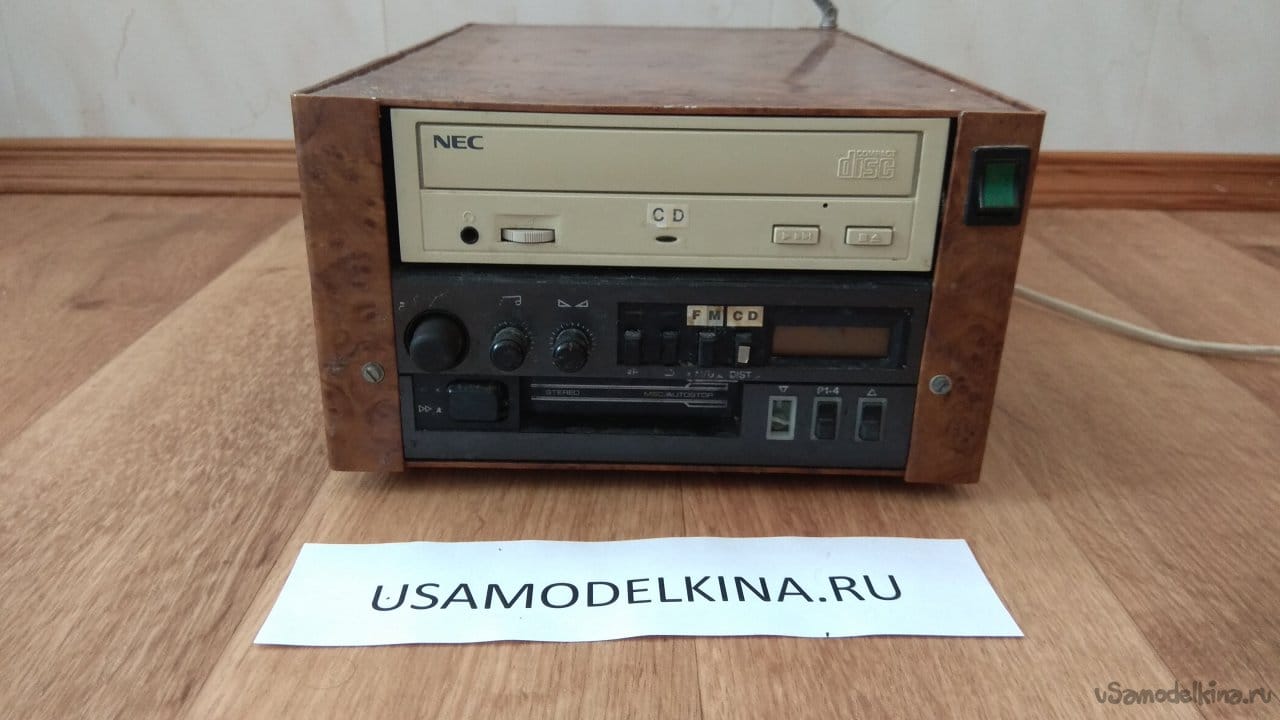 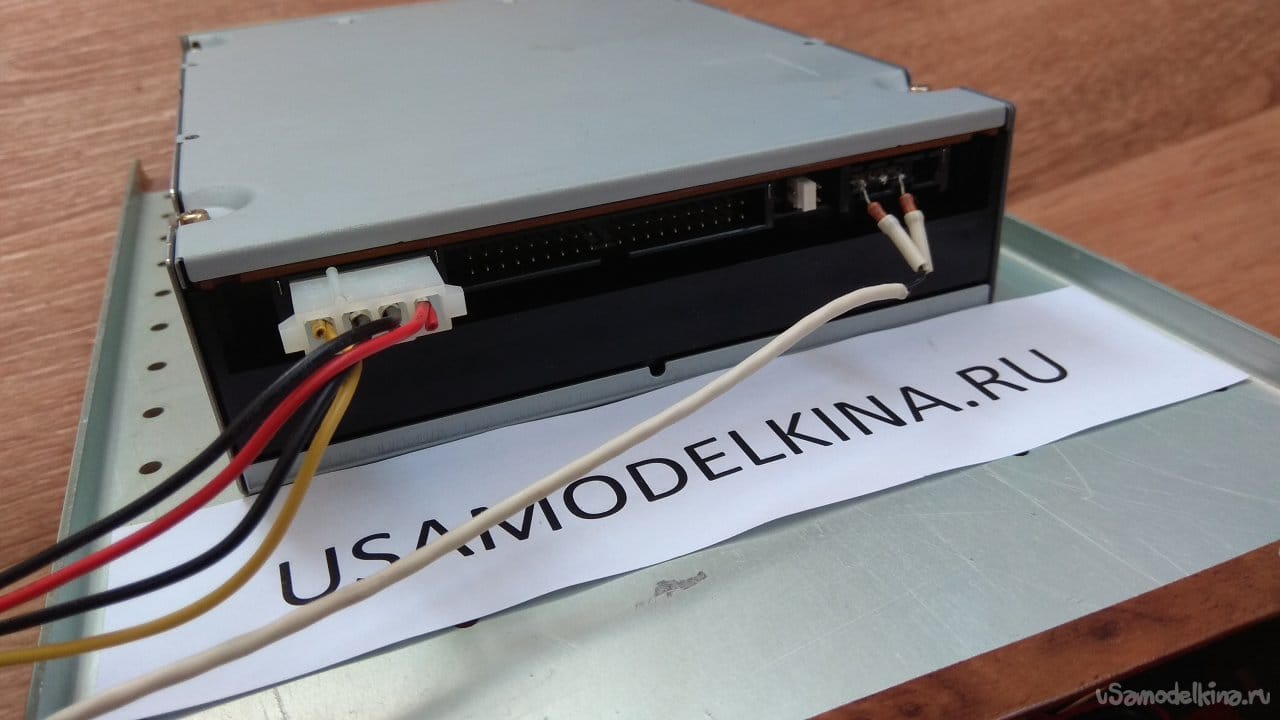 If anyone does not know, these drives can work autonomously, without connecting to a computer and play audio discs. The second button is for switching to the next track. There were drives with a large number of buttons that allow you to fully control playback, but I have not seen such ones live. The front of the drive has a headphone output with volume control.
Initially, a transformer power supply with a simple linear stabilizer for 12V was used to power the music center. It was very hot, although it had a radiator in the entire rear wall, a consequence of the increased voltage from the 17V transformer and an additional 5V stabilizer for the CD drive. Subsequently, the transformer power supply was replaced with a used ATX computer power supply, which immediately solved all the problems. It really had to be repaired after a couple of test turns, the duty room burned down due to a dry condenser. 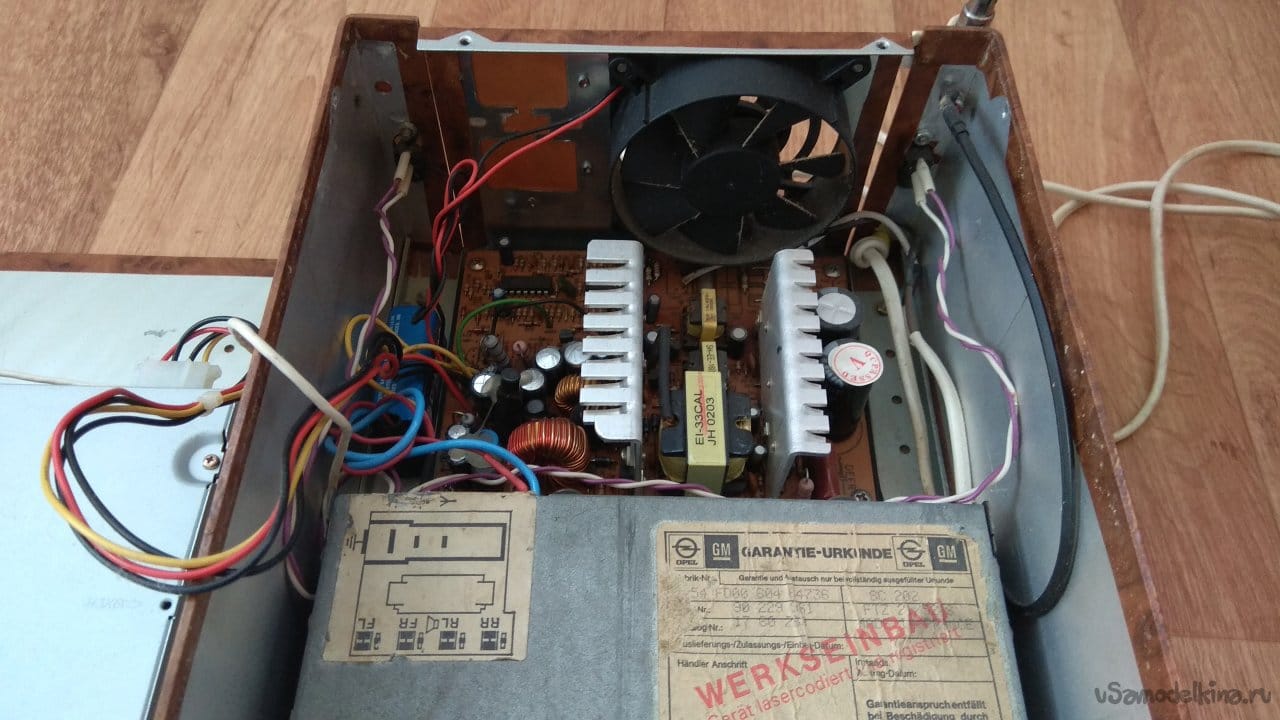 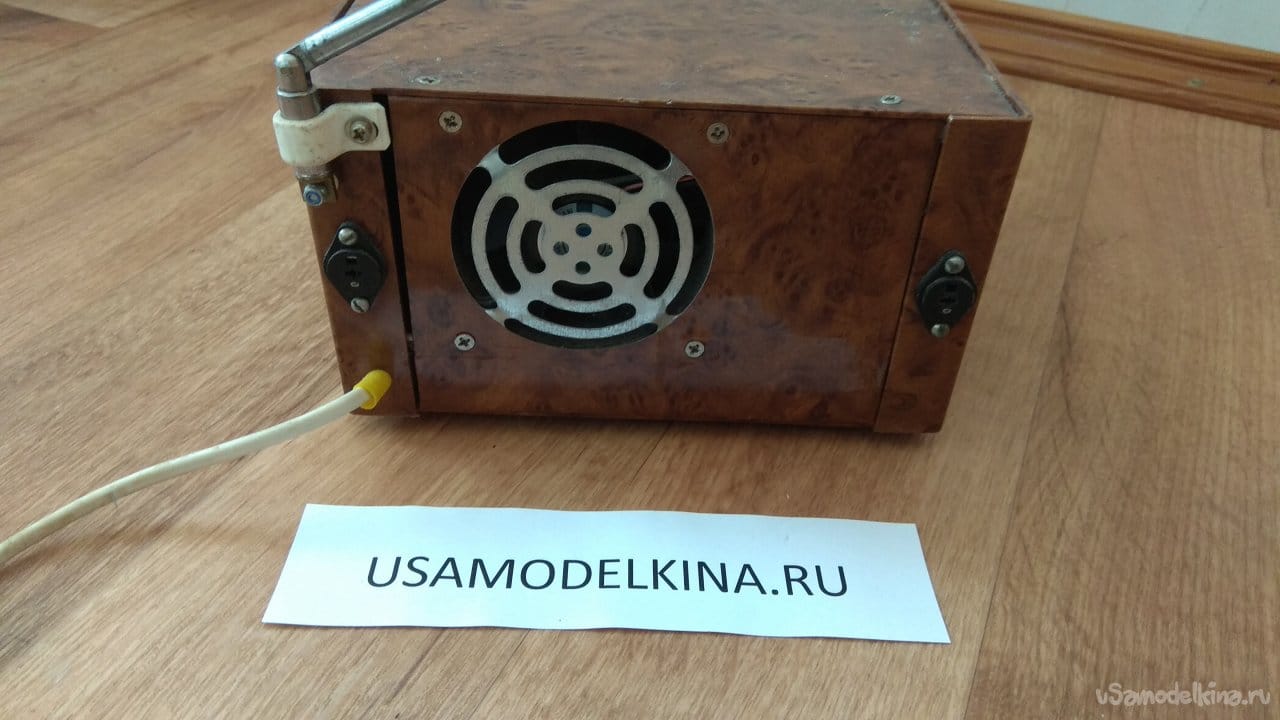 A significant part time to build the music center was spent on building the body, the eternal pain of all radio amateurs. Now you can buy a suitable case in a store or order on Aliexpress, and mostly plastic. At the same time, the cases were made from any material at hand: plywood, fiberboard, foil-coated textolite, sheet metal, and so on, whoever had what.
The body of my homemade product was made of sheet aluminum from decommissioned equipment. After cutting, adjusting all the parts, drilling holes and cutting threads in them, I pasted over the body parts with a self-adhesive film imitating wood.
The car radio made a line-in for connecting the audio output of the CD drive. One of the buttons on the car radio was used to switch the amplifier inputs. To save the tuner's settings, a 9V battery of the “Krona” type is used. Power from the battery through a diode decoupling and a voltage limiter on a zener diode connected directly to the tuner controller microcircuit. 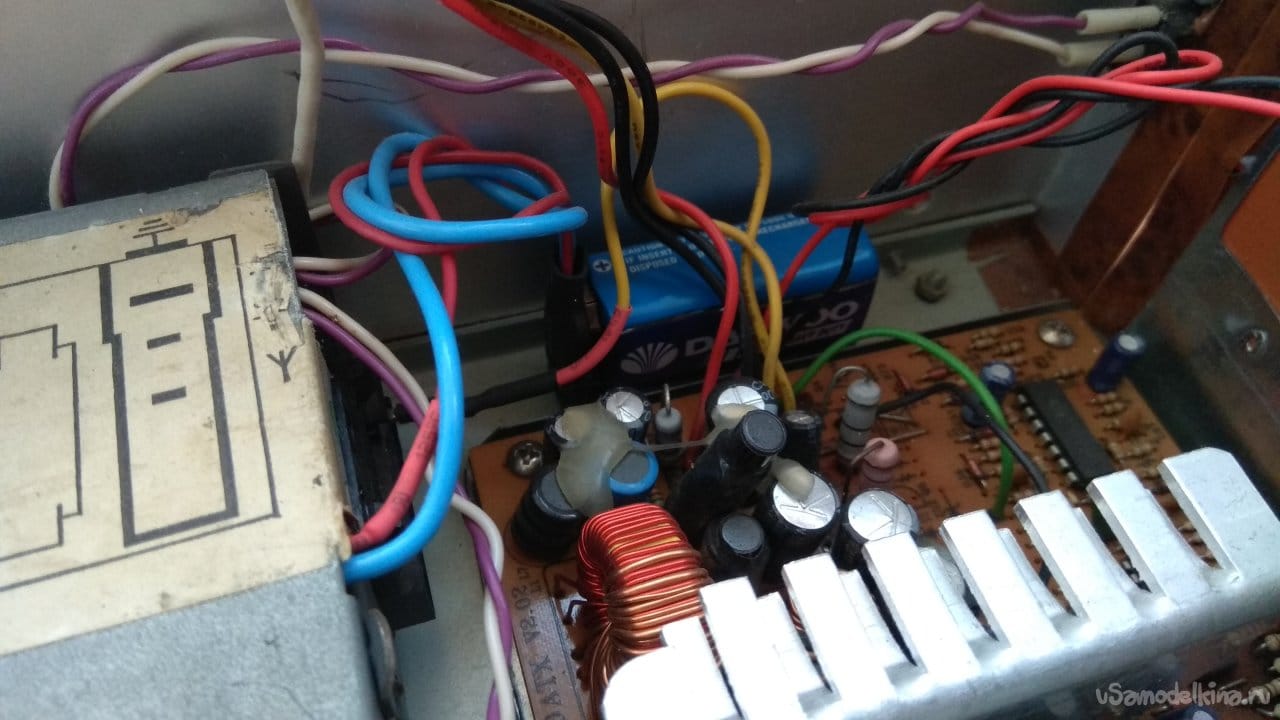 Speakers for homemade music center on the speakers 8GDSH-1-4. Material plywood 10mm, top covered with mahogany veneer. The right one is a little battered by time, stands all year round on the corner balcony. Frost and sun destroyed the varnish.
kitchen. Now, alas, it is not in demand.