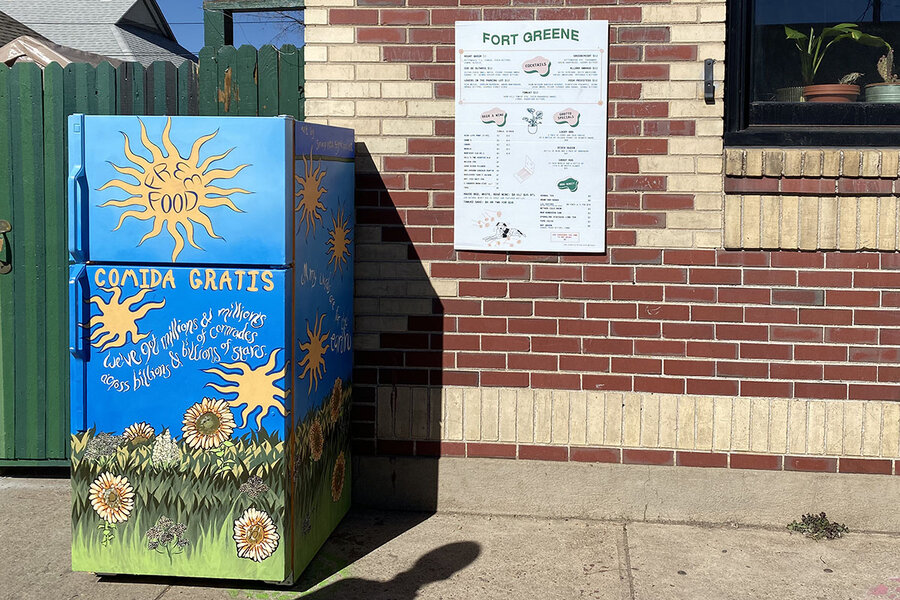 Taylor Stack, her roommate, and two new friends slowly wrestled the refrigerator up 12 steps to street level and into the waiting truck in a Boulder, Colorado, neighborhood.

The fridge was old and bulky, and a darting dog didn’t help. But it was beautiful – painted light blue with large, bright suns shining on a field of sunflowers. Its final destination: a Denver sidewalk, where it would offer free food to the neighborhood.

“It felt really empowering for us to be able to do it,” recalls Ms. Stack, who works at a shelter for unhoused people in Denver, “just folks coming together, supporting one another, and getting something done.”

Can meeting a neighbor’s need help stabilize an entire community? That’s what some in the community fridge movement are aiming for. Second in a series about hunger in America.

The pandemic has shined new light on America’s hunger problem. Last summer, researchers at Northwestern University estimated that food insecurity doubled due to the economic slowdown. Food insecurity was a problem for up to 23% of all households and around one-third of Black and Hispanic households. And since the pandemic began, 35% of lower-income adults have gotten food from a food bank, according to a Pew Research Center survey.

As lines at local food pantries stretched around the block, community fridges emerged as a grassroots response – neighbors feeding neighbors. Similar to Little Free Libraries and Little Free Pantries, only bigger, community fridges let anyone give and take food freely, which is especially helpful in neighborhoods where access to fresh produce is limited.

The concept first appeared in Germany around 2012. Then the pandemic spurred its appearance in cities across the United States. Now, there are more than 160 new community fridges throughout the country, according to the spreadsheet used by Freedge, a food-sharing facilitator.

Although the fridges face a unique set of challenges – upkeep, food safety, and a place to plug in – they have become an emblem of mutual aid, a concept that has become popular during the pandemic. Mutual aid is different from charity, say activists, because instead of forming a one-way relationship, it builds cooperative networks based on solidarity. And although some experts feel the fridges hide more important questions about how to solve hunger, the community relationships they are forming could serve as a bridge to longer-term solutions.

“Meeting the need that’s right in front of us”

To Mark Bucher, the appeal of a place to provide free meals was simple: an opportunity to care for others. So when schools closed last March, he called around. “What’s the plan?” he asked. As a restaurant owner in Washington, D.C., he wanted to help make sure no child went hungry in his community. “I had been seeing some news stories about community fridges,” he says, “and I’m like, ‘Maybe I can fill these with meals.’”

Because some sidewalk fridges have been shut down due to city health codes and permit requirements, Mr. Bucher approached the Department of Parks and Recreation at the outset, which quickly agreed to a partnership. Mr. Bucher’s program, Feed the Fridge, now stocks 19 fridges in community centers around the city. Donations to the program go to local restaurants in exchange for meals for the fridges.

“It’s a way of presenting these meals to those that are in need in a dignified manner,” says Delano Hunter, director of the Department of Parks and Recreation. “I know there’s a time and place for policy,” he says, but “we just want to focus on meeting the need that’s right in front of us.”

For their part, the community centers are happy to distribute the meals to those they serve, no questions asked. “They probably won’t tell you they’re hungry, but it’s going on everywhere,” says Sebrena Rhodes, who coordinates a community center for children in Ivy City, a low-income area of Washington. Every day she gives out fresh meals from the center’s Feed the Fridge refrigerator. “They combat hunger but they’re also helping the restaurants, and so that’s a win-win situation,” Ms. Rhodes says.

Not everyone agrees. Some say that community fridges, like other forms of emergency food distribution, can’t address the real problem behind hunger – poverty.

“The food distribution system has never worked for people in under-resourced communities,” says Rae Gomes, executive director of the Brownsville Community Culinary Center. She believes community fridges are a “feel-good” response that doesn’t encourage people to think about why poor people are hungry in the first place.

Andy Fisher agrees. To him, the problem is the way the U.S. understands hunger.

“I think that we’ve made a decision as a society to separate out hunger from poverty,” says the author of “Big Hunger: The Unholy Alliance Between Corporate America and Anti-Hunger Groups.” By treating hunger as a technical problem to be solved by handing out food, Mr. Fisher says, we ignore the conditions that create hunger – like unemployment, low minimum wages, high costs of living, and medical bills. Community fridges may be a sign of “neighborliness,” he says, but they don’t solve these problems.

Diane Hatz understands these critiques. Ms. Hatz is the founder of East Village Neighbors in New York, which organized a community fridge last spring. “A fridge is a Band-Aid and a stopgap,” she says. She wants to see long-term solutions to the country’s hunger problem, but for now, she believes the fridges revitalize and rebuild communities that have become fractured.

Like Mr. Bucher and other organizers, Ms. Hatz expects her fridge project to continue and grow beyond the pandemic. And she feels that fridges are a first step in helping neighborhoods take ownership of the local food system. “I’m hoping they serve as a bridge,” she says.

Miles away in Denver, Ms. Stack has similar hopes. She says the fridges show “what can happen when you actually invest in a community.”

Previously, she had been considering leaving Denver. “I felt a complete lack of community before COVID,” Ms. Stack says. But when she joined Denver Community Fridges, she met dozens of people working to support their neighbors. “During a time when the government hasn’t been taking care of us in a way that we need,” she says, “we, as individuals, have stepped up in communities across the country to take care of one another.”

She is no longer thinking about leaving her community.

What you should know before planning a post-vaccine gathering

Maine legislator being investigated for Weinstein backdrop on Zoom