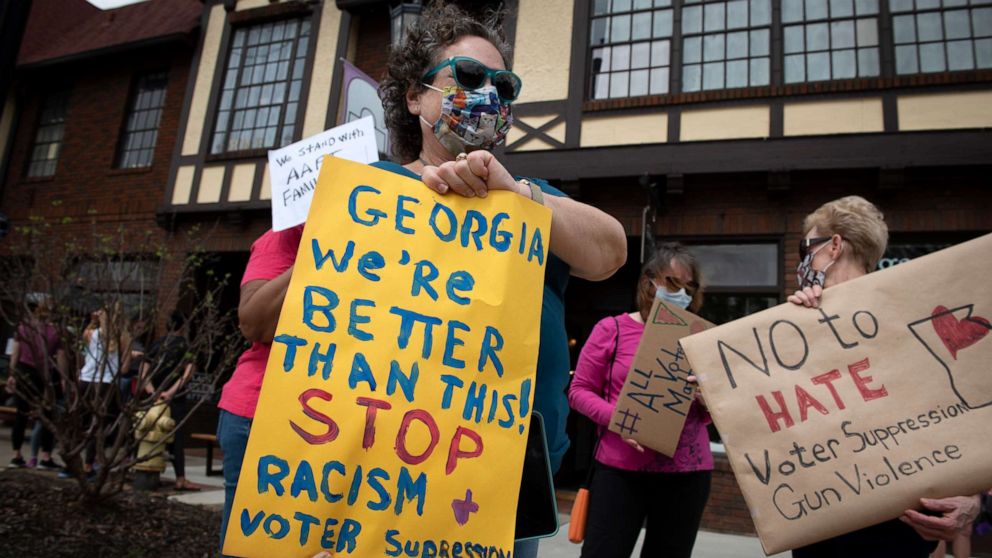 President Joe Biden is signaling that he’s ready for the fight. But the issue is playing out in a particularly polarized way — in entirely different directions at the federal level and inside states, depending on which party is in power — that could easily jeopardize the rest of his agenda.

Now that the president has called the new voting law in Georgia both “un-American” and “Jim Crow in the 21st Century,” there may be no avoiding what comes next. Even as Republicans debate new restrictions in Arizona, Florida, Texas and elsewhere, Democrats face pressure inside their own ranks to act boldly at the federal level in a much different direction.

When both parties say the other side is engaged in a “power grab,” it’s hard to even think about middle ground. States are passing more restrictive voting-access measures without Democratic support and Biden and congressional leaders are backing more expansive measures without Republican support — and may go so far as to blow up Senate rules to pass it.

Biden, of course, needs a bipartisan buy-in to advance initiatives on immigration, gun control and virtually everything else on the agenda. He surely doesn’t want the coming infrastructure week to be “infrastructure week.”

Opening statements in the trial of Derek Chauvin start Monday, bringing a renewed focus on police reform. Chauvin is the fired Minneapolis police officer charged with murder in the death of George Floyd. Chauvin was caught on camera kneeling on Floyd’s neck for nearly nine minutes while Floyd begged for his life.

The George Floyd Justice in Policing Act, spurred by Floyd’s death and international protests in his memory, would establish a national standard for the operation of police departments, aims to streamline federal law to allow for the prosecution of excessive force, mandates that independent prosecutors handle police investigations, establishes data collection on police encounters and redirects funds to invest in transformative community-based policing programs.

It would also ban chokeholds and no-knock warrants, and would require that police only use deadly force as a last resort after trying de-escalation tactics.

An identical bill passed the House in 2020 but languished in the Republican-led Senate. The legislation passed the House 220-212 without Republican support earlier this month and this time around Democrats have the majority. But the future is murky in the evenly divided Senate because a 60-vote requirement means that Democrats will need to entice 10 Republicans, many of whom are staunchly opposed.

The filibuster in its current form could also stamp out the attempt to address the outcry of thousands of protesters across the country who have called for transformative change in policing.

Not even two months into his tenure as the head of the Michigan Republican Party, Ron Weiser is under fire. After calling three high-ranking female Democratic leaders in the state “witches” who should be “ready for the burning at the stake,” and mentioning “assassination” as a possible scenario to oust two Republican lawmakers who voted to impeach Trump, he issued an apology.

“In an increasingly vitriolic political environment, we should all do better to treat each other with respect, myself included. I fell short of that the other night. I apologize to those I offended for the flippant analogy about three women who are elected officials and for the off-hand comments about two other leaders,” he said in a statement released Saturday. “I have never advocated for violence and never will.”

For the three women he targeted — Gov. Gretchen Whitmer, Attorney General Dana Nessel and Secretary of State Jocelyn Benson — Weiser went too far. And his attempt to walk back his controversial comments was seen as a “half-apology” that didn’t go far enough, particularly in a state that has seen armed protests and death threats directed at its elected officials over the last four years.

For Whitmer, in particular, Weiser’s rhetoric is “destructive and downright dangerous,” as a spokesperson for the governor put it. But it’s also not the first time Republicans have put her in their crosshairs. As one of the most visible leaders during the coronavirus crisis, she was a favorite mark for Trump and, in turn, became a target of the right and of a thwarted kidnapping plot last year.

As he confronts a set of concurrent challenges, President Joe Biden receives high marks on his top priorities — the coronavirus pandemic and the economic recovery. Still, there are warning signs for other areas of his agenda where external events have imposed new urgency, a new ABC News/Ipsos poll finds.