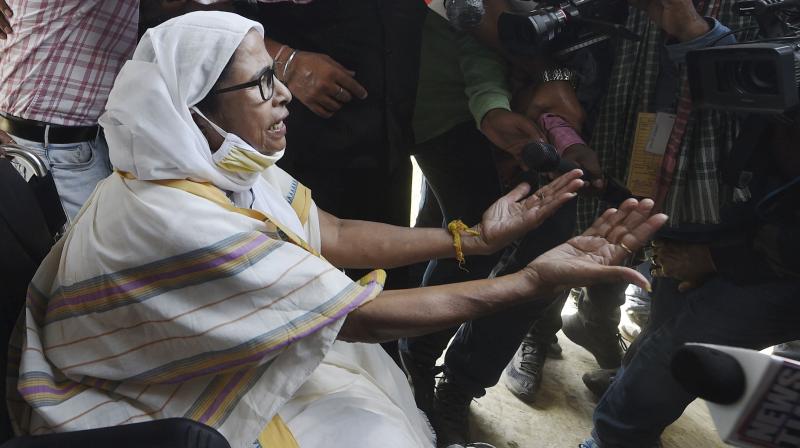 Kolkata: Despite prohibitory orders issued under Section 144 of the CrPC, massive presence of Centre-ordered paramilitary forces and aerial surveillance by the Election Commission, Nandigram — the hot seat in West Bengal Assembly elections where chief minister Mamata Banerjee is taking on her protege-turned-adversary Suvendu Adhikari — reeled under violence on Thursday, leaving Ms Banerjee stranded at a polling booth for over two hours.

Ms Banerjee had to be rescued by Central paramilitary forces after she was confined at a polling booth in Nandigram amid an extremely tense face-off between BJP and Trinamool Congress supporters. From the spot, she dialled Governor Jagdeep Dhankar, telling him the situation was a failure of the Election Commission.

"Anything might happen at any moment… There is total breakdown of law and order," wheelchair-bound Ms Banerjee said, adding that she feared for her life. She was escorted out by the security forces, who managed to bring the situation under control after long-drawn negotiations with the villagers.

Soon after, the Governor tweeted, "Issues flagged @MamataOfficial a while ago on phone have been imparted (sic) to the concerned".

Despite this Nandigram recorded voter turnout of over 81 per cent till 5 pm.

Though sporadic incidents of violence and allegations of vote fraud marked the second phase of West Bengal Assembly polls, a large voter turnout of more than 80 per cent was recorded. Bankura recorded the highest turnout at 82.92 per cent, followed by Purba Medinipur at 81.23, South 24 Parganas at 79:65 per cent, Paschim Medinipur at 78 per cent.

The Election Commission has sought a report from the East Midnapore district administration on Ms Banerjee's presence at the booth for a long time and her allegations of electoral malpractices.

Violence erupted across the high-profile constituency as the polling got underway in the morning. At Satengabari, TMC activists pelted stones on the convoy of Ms Banerjee's nemesis, Suvendu Adhikari of the BJP, and shouted “Go Back”. Bombs were hurled at Sonachura and Kalicharanpur. In Bhetukiya a BJP worker, Uday Dube (48), was found hanging in his residence. His party accused the TMC of driving him to commit suicide.

Allegations also surfaced against the BJP of not allowing TMC agents at voting booths, rigging and booth capturing at many polling centres. Ms Banerjee, who was keeping a tab on the polling from her temporary address at Reyapara in Nandigram, came out in the afternoon. She visited booth (No. 7) at Boyal Moktab Primary School at around 1.15 pm after getting complaints from her party of booth capturing and rampant rigging by the BJP in the absence of Central paramilitary forces.

The TMC chief was taunted by BJP workers with "Jai Shree Ram" slogan and her party workers, shouting "Khela Hobe", clashed with them. Sitting in her wheelchair inside the booth, a helpless CM was seen calling up Governor Jagdeep Dhankhar to complain as the fight between BJP and TMC workers escalated despite prohibitory orders. Stones were hurled and abuses traded, prompting the administration to rush a police contingent to the spot.

Later, IPS officer Nagendra Nath Tripathi, who was deputed by the EC in Nandigram, rushed with Election Commission officials to the CM and spoke with her.

In 2015, Mr Tripathi was sent on compulsory leave by Ms Banerjee for slapping a famous sweet shop owner during Municipal polls in Kolkata. At around 3.15 pm, Central forces and state police personnel escorted Ms Banerjee out of the booth.

“Eighty per cent votes here were rigged. Cheating was done in polling here. I lodged 63 complaints to the EC. Why are the goons of the BJP from other states like Uttar Pradesh allowed here? I have never seen such an EC. I urge it to act impartially. I am not blaming the Central forces because Union home minister Amit Shah is giving orders to BSF, CRPF and others,” Ms Banerjee said.

"I am not worried about Nandigram because I am winning here. The people love me and cast their votes for me. I am worried about democracy. Even today Prime Minister Narendra Modi addressed two rallies in the state while the polling was underway. This is a violation of the EC's Model Code of Conduct,” she added.

Confident about his victory, Mr Adhikari said, "The CM, as a candidate who is bounded by electoral Do's and Don'ts, cannot stay inside a booth for such two hours. She directly influenced the voters." The TMC boss claimed she would win a majority of the 60 seats that had gone to polls in the first and second phase.