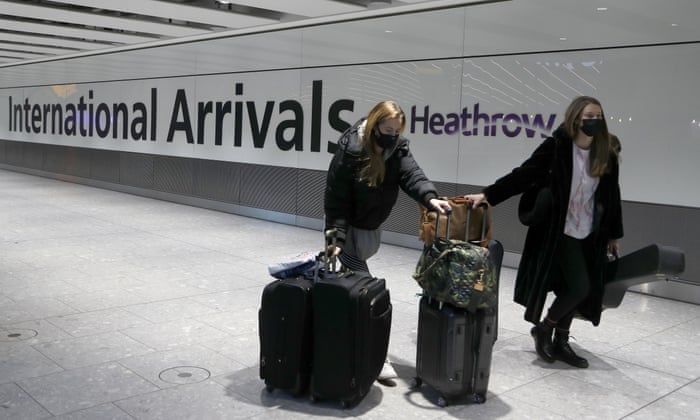 Boris Johnson is preparing to outline the tests the government will use to determine whether foreign travel could resume this summer, after four more countries were added to the “red list” of areas from which almost all arrivals are banned.

The government announced on Friday that the Philippines, Pakistan, Kenya, and Bangladesh would join 35 other countries on the list, as ministers sought to prevent potentially vaccine-resistant variants of Covid-19 from entering the UK.

UK and Irish nationals and residents can return from red-list countries but they must pay to enter compulsory hotel quarantine.

The changes will come into effect at 4am on 9 April. “The government has made it consistently clear it will take decisive action if necessary to contain the virus and has added these destinations to the red list to protect public health,” a government statement said.

To the dismay of some experts, ministers have rejected the idea of widening the list to include European countries such as France and Germany, where a third wave of Covid infections is causing growing concern about the potential for mutations.

“It is bonkers,” said Gabriel Scally, a visiting professor of public health at the University of Bristol and a member of the Independent Sage committee, adding that everyone entering the country should go into hotel quarantine.

“The biggest risks are from countries on our doorstep where the virus is engaged in exponential growth, it is out of control, and France is definitely one of them.”

He added: “The only thing that is saving the UK at the moment is the high levels of vaccination – but the government is putting all that progress at risk by having a public health policy on our borders that is a leaky sieve.”

Dr Kit Yates, the co-director of the centre for mathematical biology at the University of Bath and also a member of Independent Sage, said the risks would increase as Covid restrictions were eased, potentially increasing the R-number.

“New importations have occurred at a time when the reproduction number has been less than one and chains of transmission are more likely to be broken naturally,” he said. “The worry is that this will no longer be the case as we begin to open up.”

The R number is the average number of people an infected person goes on to infect: when it is above 1 an epidemic can grow exponentially and when it is below 1 the disease will eventually fizzle out. Among concerns, Yates noted the South Africa variant was at high levels in countries which were not yet on the government’s “red list”.

The prime minister told the liaison committee of senior MPs last week that placing France on the red list could not be ruled out, but underlined the close trading and other ties between the two countries that would make it difficult to implement.

“We are certainly looking at that but people should be under no illusions that it would have consequences,” Johnson said, stressing the high volume of cross-channel trade.

The prime minister is expected to set out further details on Monday of how and when foreign travel could potentially resume, with a No 10 source warning the government would continue to be “pretty tough on borders” for the time being.

Ministers are known to be considering a “traffic light” system, with the toughest quarantine and testing restrictions applied to red list countries, while quarantine-free travel could potentially be opened up to “green” countries.

Government sources confirmed that a key criterion in deciding which countries would be “green” would be the proportion of the population that is vaccinated, as well as the prevalence of “variants of concern”.

Places with the highest rates of vaccination at present include the US, Israel, Chile and the Maldives.

The government’s roadmap says foreign travel will not resume before 17 May at the earliest. For the time being, travel for all but a few essential purposes remains banned.

In Kenya, the travel ban to the UK had been widely predicted, and reaction has been largely muted. But some in the eastern African economic powerhouse and major tourist destination accused the UK of “medical racism”.

“Once the US, UK and EU reach herd immunity by June, it will close itself against Africa, Latin America, Middle East and Asia. It will be medical racism,” Donald Kipkorir, a lawyer in Nairobi, told the Nation newspaper.

Others pointed out that the ban came days after British soldiers tested positive for Covid-19 after arriving in Kenya. The British army training camp in Kenya has been placed in enhanced isolation after positive tests by a “very small number of soldiers”, the British high commission in Nairobi said.

The decision will reinforce widespread resentment at western measures to protect economies and public health, as even wealthier African countries struggle to procure vaccines. The ban will further damage the Kenyan tourist industry, removing one of the few remaining direct transport links between the UK and sub-Saharan Africa.

Health campaigners in the Philippines lamented the travel ban. Dr Joseph Carabeo, the co-convener of the campaign group Shape Up, which has campaigned for changes to Manila’s Covid strategy, said the UK’s decision was understandable, given the surge in infections.

But he added that he hoped the UK would recognise that sharing vaccine supplies fairly around the world would also protect the British public in the long term. “Even if you have herd immunity in your country, it is still a small globe,” he said.

In Pakistan, where cases are also surging, the prime minister, Imran Khan, has said the recent variant of the virus has been brought by people from the UK who have travelled to Lahore, Islamabad and Peshawar.