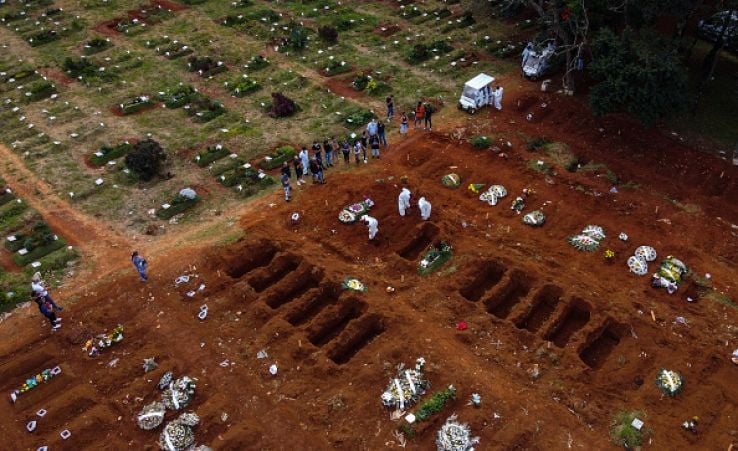 Gravediggers in the Vila Nova Cachoeirinha cemetery in the city’s northern reaches worked in white hazmat suits to open the tombs of people buried years ago, bagging decomposed remains for removal to another location.

Relocating remains is standard in cemetery operations, said the municipal secretary responsible for funeral services, in a statement. But it has taken on new urgency as Brazil suffers its worst coronavirus wave since the pandemic began over a year ago.

Bolivia announced on Thursday that it would shut its borders to Brazil, citing concerns over a new variant of the disease detected in its larger neighbour.

A day earlier, Brazilian biomedical institute Butantan said that it had detected a new variant that shared similarities with one first seen in South Africa, which appears more resistant to existing vaccines. The South African variant is more contagious, as is an earlier variant discovered in Brazil.

Chile also closed its borders to all foreigners on Thursday, while tightening a severe lockdown, as it surpassed 1 million cases recorded since the start of the pandemic.

“What is happening in Brazil is a global menace,” said José Miguel Bernucci, secretary of Chile’s National Medical Association. “Closing the borders won’t help us so much with the variants that we already have here, but with the new variants that can continue to be created.”

Countries around the region have expressed concern that Brazil is a breeding ground for new variants, as cases surge and Brazilian president Jair Bolsonaro refuses to support masks and lockdowns.

Having previously expressed scepticism about immunisations, Bolsonaro said on Thursday he would only decide whether he would receive a vaccine himself after all Brazilians have been vaccinated.

Brazil has been slow to roll out its vaccine campaign, with only about 7 per cent of the population having received a first shot.

Brazil’s outbreak is the second-deadliest in the world after the United States, averaging about 3,100 deaths and 74,000 new cases per day over the past week – a rate that has climbed steadily since February.

Sao Paulo has also resorted to late-night burials to keep up with demand, with cemeteries authorized to stay open to 10pm.

In the Vila Formosa cemetery, workers in masks and full protective gear have been digging rows of graves under flood lights and a full moon this week.

The coffins have followed. A 32-year-old man lowered down in a plain wooden box. A 77-year-old woman, whose masked relatives gathered near the grave.

The city of Sao Paulo registered 419 burials on Tuesday, the most since the pandemic began. If burials continue at that pace, city hall said it will need to take more contingency measures, without specifying.

Brazil currently accounts for about a quarter of Covid-19 daily deaths worldwide, more than any other country.

Infectious disease experts warn that it will only get worse, given weak restrictions on movement and a slow rollout of vaccines.

The World Health Organization on Thursday said Brazilian hospitals were in critical condition, with many intensive care units 90 per cent full.

“Indeed there is a very serious situation going on in Brazil right now, where we have a number of states in critical condition,” WHO epidemiologist Maria van Kerkhove told a briefing.

2 dead after plane crashes during gender reveal stunt in Mexico