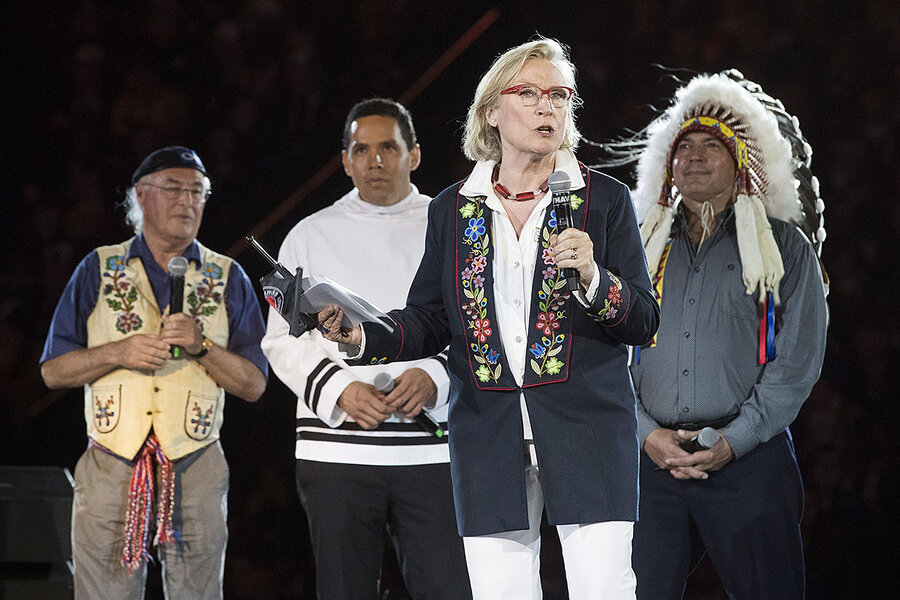 Why do land acknowledgments matter?

The land acknowledgment is intended for use by non-Indigenous members of society as a corrective measure, to recognize history. The atrocities committed against Indigenous populations – from genocide to forced assimilation – are only now coming into public consciousness, after being taught in school through a settler lens, if at all.

In Canada, a turning point came with a landmark report from the 2015 Truth and Reconciliation Commission on forced residential schooling of Indigenous children, which was summarized as “cultural genocide.” Since then, land acknowledgments have flourished.

In the U.S., the Reclaiming Native Truth project, a two-year, $3.3 million public opinion survey, concluded that the vast majority of Americans have little or no knowledge about Native Americans. For many Indigenous people, a land acknowledgment is a starting point.

“When we kicked off the work around land acknowledgment, it was just to get people to stop and think, think about the truth that is their place,” says Wayne Ducheneaux II, executive director of the nonprofit Native Governance Center in Minneapolis, “and to understand that Indigenous folks here are part of the past, but we’re also here at present, and we’re going to be here well into the future.”

Why has this become a global movement?

The Native Governance Center launched an event in 2019 on how to pen a land acknowledgment. It was inspired by Indigenous people around the world.

“We were looking at what our relatives up north were doing,” Mr. Ducheneaux says. “I think about Aboriginal Australians and how they’ve had to basically build sovereignty out of nothing. I’m thinking about our Maori relatives in New Zealand and how, through getting folks to acknowledge their place in the world, [they] have really become a powerhouse in New Zealand.”

In response, it received hundreds of inquiries from government officials, churches, entrepreneurs, and educators. It’s a sign of a larger awakening in society about the lingering legacies of racism and oppression against minority communities.

Why are acknowledgments criticized too?

They can be seen as virtue-signaling, empty rhetoric, and cheap politics.

They were the crux of a sketch on a popular Canadian comedy – a sign of how common they are, but also how controversial.

The skit portrays a theater director giving a land acknowledgment before a production. But as the lights dim, an audience member stands up to ask if they should leave because it’s “somebody else’s land.” The director says it’s the theater’s land now, prompting the patron to ask whether any of the proceeds from ticket sales go back to Indigenous communities. “They go back to the theater,” the director says.

Many Indigenous thinkers decry acknowledgments as an easy way to express allyship without doing the hard work, like fighting for the land or for clean water on reservations. The Native Governance Center recently expanded its work on land acknowledgments to address the issues of “optical allyship.”

“That is standing in solidarity on social media but not coming and standing shoulder to shoulder, or doing what is quick and easy and trendy … instead of digging in to truly help,” says Mr. Ducheneaux. “The land acknowledgment needs to be more than lip service, and it has to result in a movement, a movement where invisibility is smashed.”

The female price of male pleasure

New York on the verge of legalizing recreational cannabis