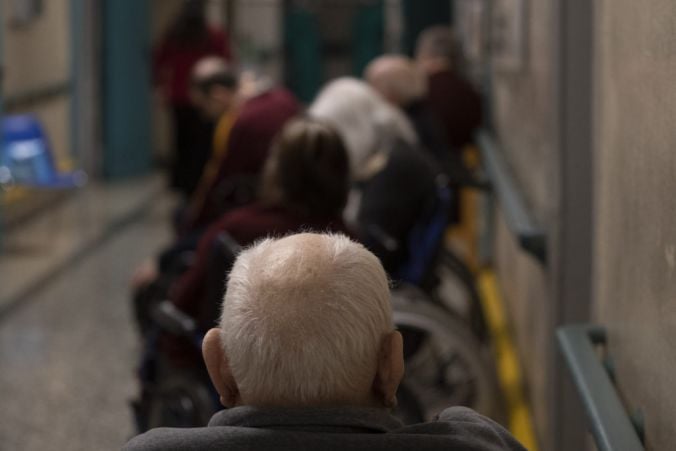 An elderly man waits for his jab, © AP/Press Association Images

Octogenarians in Tuscany have watched in disbelief and indignation as lawyers, magistrates, professors and other younger professionals received Covid-19 vaccinations before them, despite government pledges that Italy’s oldest citizens would be given priority.

Even some of the OAPs’ adult children jumped the queue ahead of them.

By one estimate, the failure to give jabs to the over-80s and those in fragile health has cost thousands of lives in a country with Europe’s oldest population and the continent’s second-highest coronavirus death rate.

As the elderly were elbowed aside, a dozen prominent senior citizens in Tuscany published a letter calling out the authorities, including the region’s governor, for what they said was a violation of their health care rights enshrined in the Italian Constitution.

“We asked ourselves: ‘What’s the reason for this disparity?’” said signatory Enzo Cheli, a retired constitutional court judge who is a month shy of 87.

By late March, he still had not been vaccinated, three months into Italy’s inoculation campaign.

“The appeal was born of this idea that errors were being made, abuses,” Mr Cheli said in an interview.

He noted that investigations are under way in Tuscany and other regions where professionals received priority status.

Those aged over 80 in Tuscany have the lowest vaccination rate nationally.

Another signatory was 85-year-old editorial cartoonist Emilio Giannelli, who has not been vaccinated, while his son, a lawyer, has.

A Giannelli cartoon appeared on the front page of Corriere della Sera depicting a young man in a business jacket kicking an old man leaning on a cane out of a vaccine queue.

In a country where many citizens have learned not to count on often weak national governments, outsize influence is wielded by lobbying groups, sometimes derided as “castes”.

Premier Mario Draghi has decried such “contractual clout”, saying last month that the “basic line is the need to vaccinate the most fragile people and the over-80s”.

His government insists that vaccinations proceed in descending order by age, with the only exceptions being school and university employees, security forces, prison personnel and inmates, and those in communal residences such as convents.

According to a calculation by the ISPI think tank, opening vaccination rollouts to younger Italians cost 6,500 lives from mid-January through to March, a period in which nearly 28,000 people died.

ISPI researcher Matteo Villa said any decision to vaccinate non-health care professionals who face infection risks should have been limited to those aged 50 and older.

The current average age of pandemic victims in Italy is 81.

Throughout the pandemic, the oldest Italians have made up the majority of deaths, and not just in Tuscany.

Just before Mr Draghi sounded the alarm about lobbying groups, journalists in the small region of Molise had been poised to receive early vaccinations. In Lombardy, veterinarians were given priority.

In Campania, the region including Naples, drug company salespeople were given priority status.

Some regions such as Lazio, which includes Rome, resisted such pressures. By the end of March, nearly 64% of those 80 and older in Lazio had received at least one Covid-19 jab, compared with 40% in Tuscany.

When out & about, make hand sanitizer part of your mask 😷 wearing routine.

We are #InThisTogether to beat #COVID19pic.twitter.com/QX57ltMoFV

Speaking about society’s most fragile, Lazio governor Nicola Zingaretti told the Corriere della Sera newspaper: “It’s true everyone risks getting Covid, but the difference is that they are among those who, if they catch it, risk dying more than others.”

Of Italy’s 4.4 million residents 80 or older, fewer than 29% had been vaccinated, and another 27% had gotten only the first dose by the end of March, said the GIMBE foundation, which monitors health care in Italy.

That compares with 95% of that age group in Malta who have received at least one dose, and 85% in Finland, according to the European Centre for Disease Prevention and Control, Italy.

In Britain, where the vaccine rollout began roughly a month before the EU’s, most of the over-50s have received at least one dose.

GIMBE official Renata Gili linked much of Italy’s uneven performance to varying organizational capabilities as well as “an excess of autonomy in regions in the choice of priority categories to vaccinate”.

Baby boom or baby bust? Pandemic could have lasting effect on birth rates.