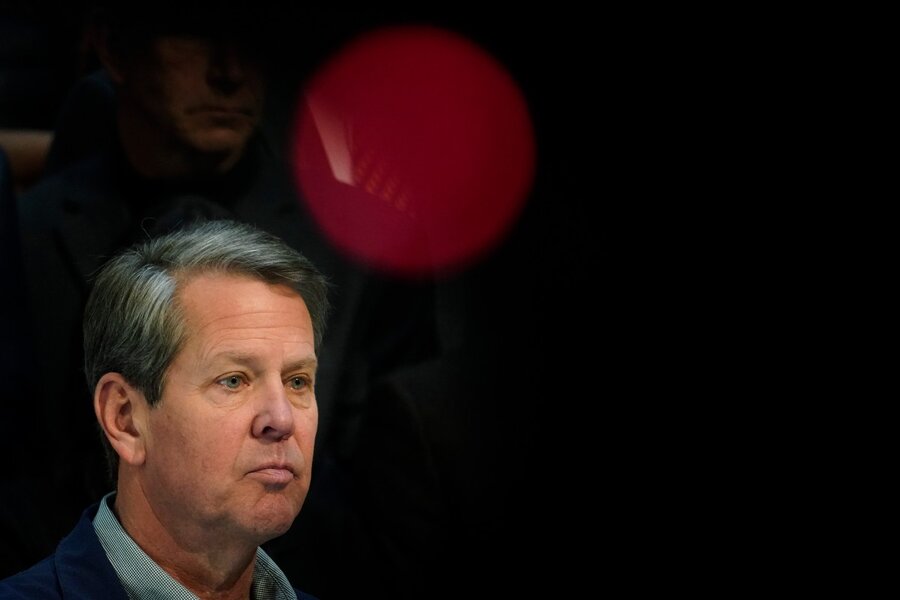 News of Major League Baseball’s decision to pull this summer’s All-Star Game from Georgia over its sweeping new voting law reverberated among fans Saturday, while Gov. Brian Kemp vowed to defend the measure, saying “free and fair elections” are worth any threats, boycotts or lawsuits.

The Republican governor said at a news conference that MLB “caved to fear and lies from liberal activists” when it yanked the July 13 game from Atlanta’s Truist Park. He added the decision will hurt working people in the state and have long-term consequences on the economy.

“I want to be clear: I will not be backing down from this fight. We will not be intimidated, and we will also not be silenced,” Kemp said.

“Major League Baseball, Coca-Cola and Delta may be scared of Stacey Abrams, Joe Biden and the left, but I am not,” he said, referring to companies that have also criticized the new law.

Three groups already have filed a lawsuit over the election law, which adds greater legislative control over how elections are run and includes strict identification requirements for voting absentee by mail. It also limits the use of ballot drop boxes and makes it a crime to hand out food or water to voters waiting in line, among other provisions.

Critics say the law will disproportionately affect communities of color.

Georgia Republicans say the changes were needed to maintain voter confidence in the election system, and the governor insists opponents have mischaracterized what the law does. Yet GOP lawmakers made the revisions largely in response to false claims of fraud in the 2020 elections made by former President Donald Trump and his supporters.

Abrams, who has championed voting rights since narrowly losing to Kemp in the 2018 election, is among those who have spoken out against the law. The Democrat is being closely watched to see if she seeks a 2022 rematch.

Patrick Smith, a lifelong Braves fan in Ellisville, Mississippi, said he thinks the league made the right decision and noted that not taking a stand would have polarized some supporters.

“When governments restrict access to the ballot box, someone has to step in to encourage these entities to roll back those measures,” he said.

Lorre Sweetman, in Kahului, Hawaii, said it was a poor move by MLB because it wasn’t based on the actual new voting laws but on “political pandering” and misinformation.

Still, while some fans upset about the decision have called for a boycott of professional baseball, she said she will not stop watching games and her three grandsons are still learning the sport.

“They caved to pressure without considering the message this sends to fans who just want to enjoy the game and support their team,” she said. “We need to take politics out of sports.”

But Dick Pagano, a baseball fan in Elk Grove Village, Illinois, said he will not watch or attend any games this year.

“They shot themselves in the foot,” said Pagano, who added he will be disappointed to miss the planned Hank Aaron celebration during the All-Star Game, because he once saw him play in the 1957 World Series. Aaron, who played for the Braves in Atlanta and Milwaukee for most of his career, faced extensive hate mail and racism as he closed in on breaking Babe Ruth’s home run record.

“I’m surprised when people argue that moving it away from Atlanta is a bad move because it would bring lots of money to the area,” he said. “The question is what costs more, moving the All-Star Game or reinforcing the oppression of votes.”

The league did not immediately respond to a request for comment Saturday.

MLB Commissioner Rob Manfred previously said he made the call to move the All-Star events and the amateur draft from Atlanta after discussions with individual players and the Players Alliance, an organization of Black players formed after the death of George Floyd last year. A new ballpark for the events wasn’t immediately revealed.

Kemp also criticized the league for not trying to improve voter access in its home state of New York, where he said voters need an excuse to vote by mail and have fewer days of early voting than in Georgia. He said its decision means “cancel culture” is coming for American businesses and jobs.

Trump also blasted the league’s move, while former President Barack Obama congratulated MLB for its decision, saying there was no better way for baseball to honor Aaron, “who always led by example.”

Sen. Mike Lee  of Utah tweeted: “Why does @MLB still have antitrust immunity?”

“It’s time for the federal government to stop granting special privileges to specific, favored corporations—especially those that punish their political opponents,” the Utah senator wrote.